The Nintendo Switch game Mario Kart Live: Home Circuit is a masterpiece of simple yet extraordinary at-home gaming fun. It combines good game design with the magic of successfully bridging the gap between reality and virtual reality with one of the most ideal implementations of augmented reality we’ve experienced so far. One considerable limitation is the size of the physical space in which one hopes to race. Is that limitation enough to avoid buying and playing the game at all?

The version of this package we were sent by Nintendo was the standard, original Mario in his standard Kart. This is the Kart you see in most of the advertising for the game. Mario Kart Live: Home Circuit is available as a free download from the Nintendo Switch store, but does nothing without the hardware (the Kart) you’ll purchase from the store.

Setup includes unfolding four cardboard and plastic checkpoints and two cardboard arrow cards. We needed to remove the Mario Kart from the box and press the power button (or ignition, if you prefer), and connect said Kart to a Nintendo Switch with a QR code.

The cardboard checkpoints were easy to unfold and set up, and connecting the Kart to the Switch was relatively simple. Once the Kart was wirelessly connected to the Switch once, we never needed to set it up as such again – it was all automatic. 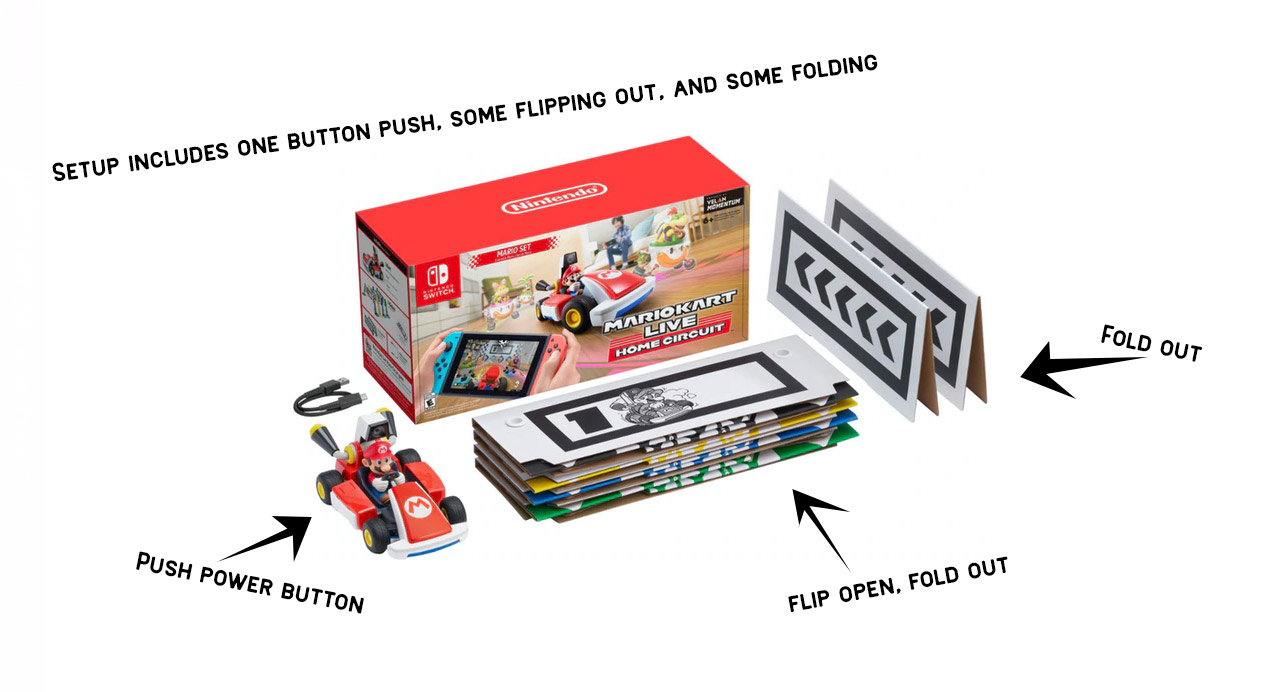 When Google and Niantic created an April Fool’s Day prank about Google Maps and Pokemon, the potential for an augmented reality Pokemon game was immense. Pokemon GO became one of the biggest mobile games ever made, and one of the most successful game launches in history.

But the game hasn’t really ever reached its initial vision – now, more than ever, (thanks in a big way to the pandemic), it’s clear that we do not need to leave our homes to participate in the world of augmented reality Pokemon. With augmented reality Mario Kart, Nintendo flipped the whole formula on its head. 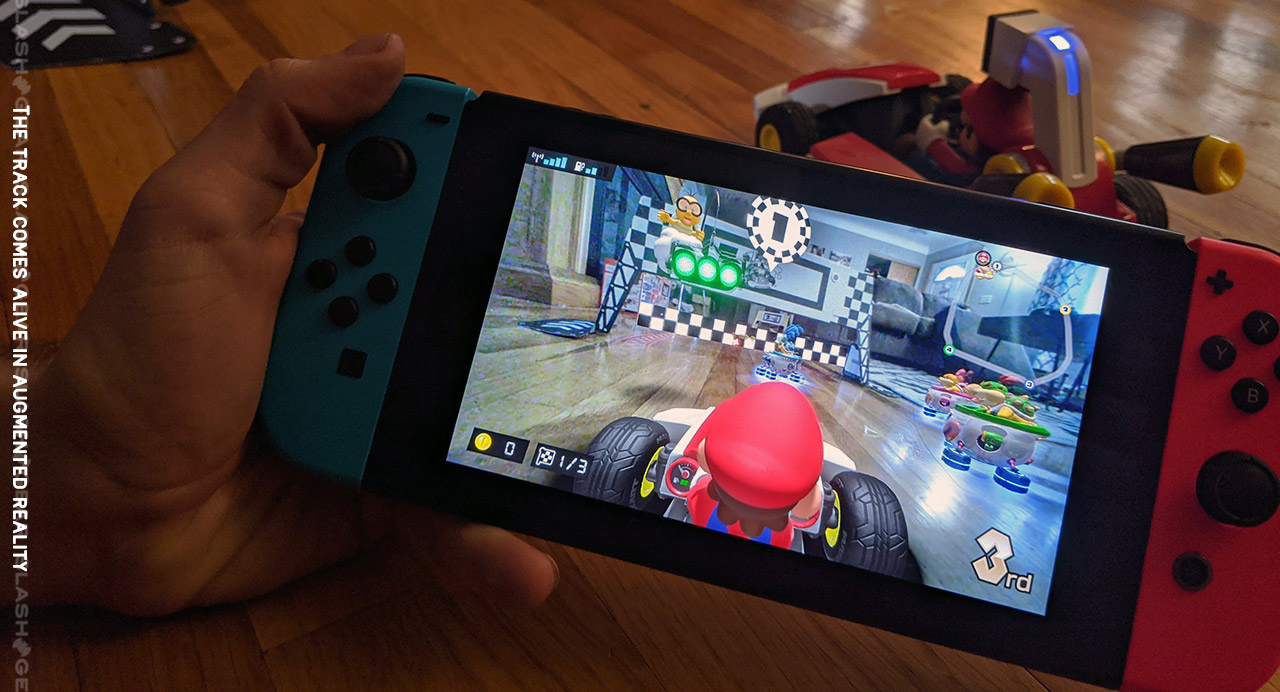 The game plants racers in your at-home track, and has you lay the track down in-game before the race begins. The Kart’s camera sees its environment and shows said environment to the Switch, where the augmented reality of the situation unfolds.

The speed of the Kart, the size of the Kart, the light required to keep the Kart on-track with the Switch – all of this has clearly been tuned to make the most of an at-home experience. The connection one’s mind makes to the Mario Kart universe in their own living space is novel.

The value of this game is not just in how entertaining and fun it is for the user. The connection Nintendo’s made with this experience is a door to a future in which virtual reality and actual reality can meet on common ground. This experience could be the start of something far, far greater. 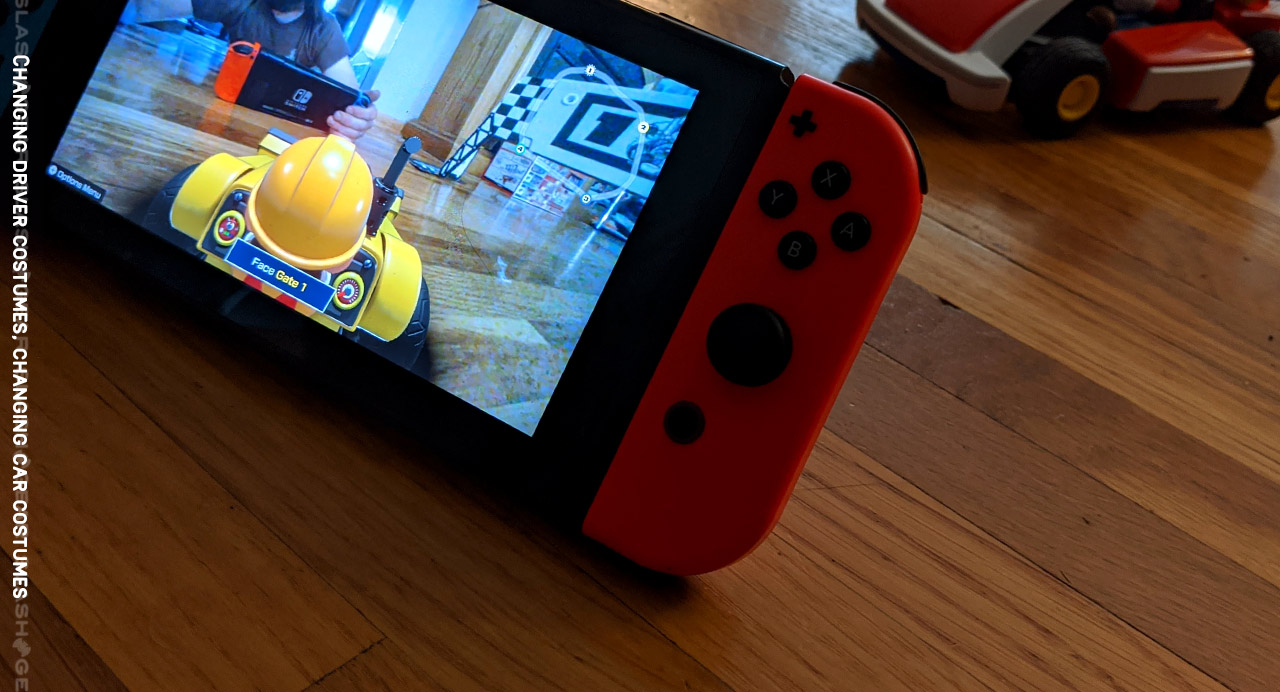 There’s a lot of room here for feature updates from Nintendo, but for now, we’re fairly limited in how close this Mario Kart experience is to the most extravagant Mario Kart games released in the past. Again, this is not a traditional Mario Kart game – it’s exclusively about what you’re able to do with a custom track you set up yourself in your own living room.

Decades from now, assuming we’re all still around, and assuming we don’t have Mario Kart Drone Racers by then, this Mario Kart Live: Home Circuit / Nintendo Switch setup is going to be a cult classic. Cross your fingers all the functionality here stays local enough that the kart and the local racing remains available far into the future!

The price of Mario Kart Live: Home Circuit is fairly prohibitive, if you can find one in stock. One racer will cost you approximately $100 USD – that’s if you find one at a store. Given the cost of your average game – around $60, adding on the cost of the remote control vehicle, $40, and it all makes sense.

Now, if only we could get additional racers (and controllers, etc.) for less than hundreds of additional dollars, we’d be running karts for days! This is for the families that already own more than one Nintendo Switch and, say, want to give each child a gift that’ll keep them busy all holiday season long.