These days, it’s no surprise when a new type of malware turns up to exploit and abuse users, but a recently discovered variant of ransomware is something else entirely. Instead of holding someone’s files for ransom until a payment is made to hackers, “Rensenware” requires that users play a punishing video game and reach a high score in order to get their data back.

But what’s really unexpected is that the creator of the malware has stepped forward, explaining that it was created as a joke and never intended it to be used on people. The name “Rensenware” is a pun on Touhou Seirensen (Undefined Fantastic Object), the name of the anime-style shooting game first released in 2009 that victims must subject themselves to. 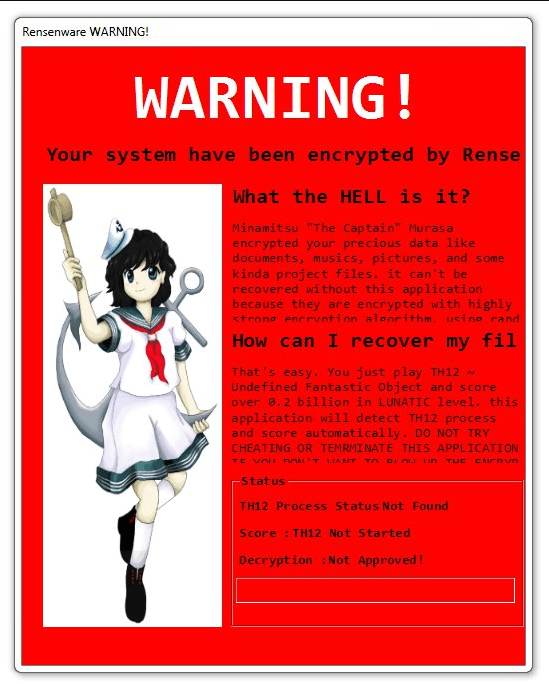 Once infected, users are presented with an image of an anime sailor girl that explains their files have been encrypted, and how they can unlock them. Players must reach a score of 200 million points on the game’s Lunatic difficulty setting, which, as you can tell from the clip below, is no simple feat.

The Korea-based creator of Rensenware, who goes by “Tvple Eraser” on Twitter, has explained that the malware was meant to be a joke, and that its source code was posted on GitHub as way to share it with people. It’s not really clear what he expected was going to happen, but he’s apologized for the trouble anyone has experienced, and admitted that putting the code online was a mistake.

He’s also gone ahead and updated the GitHub page to replace the malware’s source code with a tool that allows anyone infected with Rensenware to get around the encryption and skip playing the game.