MakerBot has made a name for themselves recently with their line of 3D printers. Today, the company is at CES 2013 showing off their new experimental 3D printer known as the Replicator 2X, which is the successor to the Replicator 2. What’s most impressive about this new model, is that it has two printing heads. We ended up stopping by the crowded booth to get a look at the new printer.

The two printing heads allow for printing more complex objects, and whereas the Replicator 2 uses PLA filament, the 2X uses ABS filaments. However, the 2X is supposed to run more smoothly, and print in multiple colors, as well as even multiple materials. The 2X will also be able to print at a 100-micron resolution. 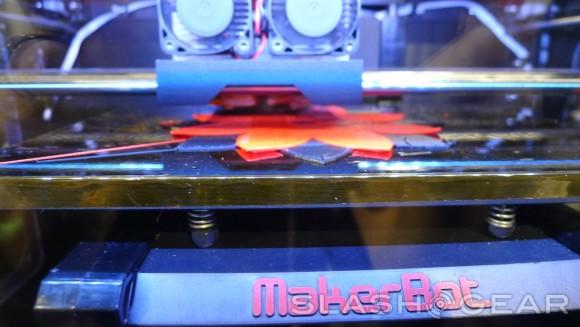 The Replicator has a slightly redesigned chassis, and among the updated features of the new design are an aluminum build platform and print area that’s enclosed by plastic windows. The benefit is that the build area retains heat better than the open chassis of past models from the company, allowing for faster and more reliable printing.

MakerBot will begin taking pre-orders for the Replicator 2X on January 11, and the company says it will begin shipping the printer to customers by mid-March. As for the price, you’re looking at something close to what a high-end MacBook Pro would cost — $2,799 to be exact.