Majority of CIOs surveyed are buying tablets for employees

Morgan Stanley’s latest report on corporate technology development reveals a very interesting statistic that shows the impact tablets are having on corporate America.  According to the suvey of 50 enterprise CIOs, 21 percent are already involved in widespread tablet purchases for employees and another 51 percent are expected to begin doing so within the next twelve months. That’s a whopping 67% marketshare for tablets in corporate America.

Breaking the survey down further, iPads represented the largest percentage of new enterprise tablet activations with 29% in December, up 25% from the previous month. That number is sure to slip in the long run as Android tablets like the Motorola XOOM and Samsung Galaxy Tab 10.1 become more widely available. 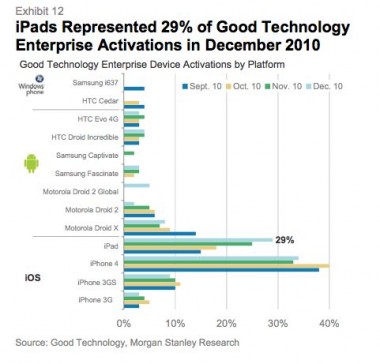 And what impact tablets are having specifically on corporate America isn’t clear, but considering a previous report by Morgan Stanley that showed Tablets were starting to cause a drop in printer activity and supplies orders, or that companies are simply becoming more tablet centric, rather than being chained to a desktop. One thing is certain, tablets are getting traction.