External trackpads aren’t exactly new, but Apple has managed to instill no small degree of excitement into their new Magic Trackpad by virtue of their multitouch technology. Essentially the trackpad from a MacBook Pro, sliced out and blown up, the wireless peripheral promises to bring gestures Apple’s mobile users have been enjoying to their desktop compatriots. Check out the SlashGear review after the cut.

Aesthetically there’s no arguing with the Magic Trackpad’s heritage, and it’s obviously intended to sit alongside Apple’s own Bluetooth keyboard. The battery section at the back – which takes a pair of AA cells, which Apple would prefer to be from their own, new charger – elevates the pad to the same angle as the keyboard, and they’re as deep as each other. Physical controls are limited to a power button on one end; the other has a twisting cap that shuts the battery compartment. 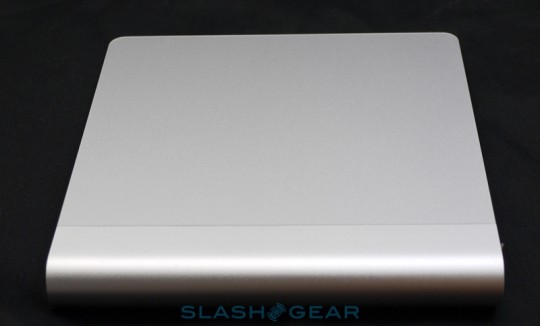 Otherwise the magic is all in the trackpad surface, which Apple say is 80-percent larger than what you’ll find on a current unibody MacBook Pro. It’s slightly squarer, so the difference is more noticeable in depth than it is width, but thanks to the glass surface the tactile feel is the same: just slippery enough. The whole pad clicks physically – as before it’s hinged across the top edge, so it gets easier to click the further down your fingers are – but also responds to taps.

So far, so much a regular trackpad, but Apple’s ace is the multitouch gesture support. That’s a combination of the hardware together with the software to take advantage of it; gestures have been baked into OS X for several iterations now, but so far desktop users have had to use a Magic Mouse in order to take advantage of them. Pairing the Magic Trackpad was a straightforward matter – it uses Bluetooth, which is present on every recent Mac – and the quoted range is up to 33ft. Practically speaking, we could comfortably sit on the sofa and control the Mac mini we use as an HTPC from across the room. 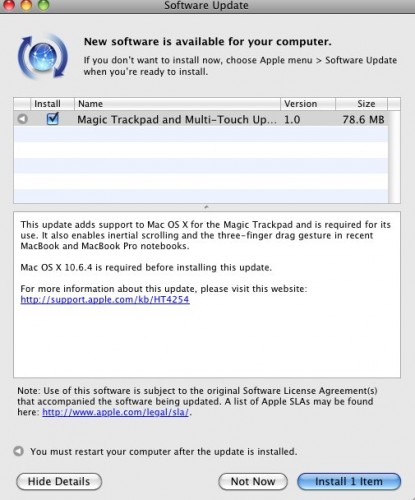 The gestures themselves should be familiar to most Mac users. By default, two fingers are used to scroll, with all directions supported, while three fingers swipes back and forth through pages. A chiral-rotate gesture flips image orientation around, while pinch-zooming is also supported. Four fingers, meanwhile, trigger Exposé when swiped up or down, or switch applications when swiped left and right. Thanks to the new settings pane, however, you can selectively shut off certain gestures if you don’t use them, adjust tracking, double-click and scrolling speed (including optional inertia), and change the behavior of three-finger use. Rather than flipping pages, you can set it to drag windows around the screen (a new software update adds the same optional functionality to MacBook trackpads). 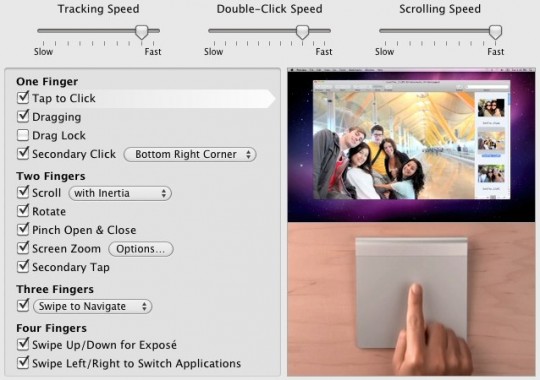 Does it work? Certainly, yes, and the experience is just like using an Apple notebook but larger. The MacBook is seldom accused of having too small a trackpad, and so the larger Magic Trackpad is even more capacious. As responsive as you’d expect, the gestures soon become second nature; if you’re familiar with them from the notebook then there’s little in the way of acclimatization time required for the new desktop product. Battery life remains an uncertainty at this stage; Apple reckon that, thanks to the Magic Trackpad’s clever power management, it’ll manage months of use before you have to replace the batteries, so we’ll be keeping an eye on that accordingly.

In the end, the Magic Trackpad is a pretty tempting proposition. Apple will still be bundling their Magic Mouse with new iMac and Mac Pro desktops (you can use the mouse and the trackpad simultaneously, in fact) but anyone who has spent a reasonable length of time with a MacBook will likely know how useful the multitouch gestures can be. $69 for that functionality seems reasonable; the closest competitor is the Wacom Bamboo Touch, which is cheaper at $49 but only supports one- and two-finger gestures and uses a wired USB connection rather than Bluetooth.

We can also see MacBook owners who may have wanted to use third-party ergonomic keyboards but were loath to give up the notebook’s trackpad choosing the Magic Trackpad too. Perhaps more interestingly, it points to the role touch and multitouch will play in Apple’s future, as it spreads across from their PMP/smartphone/tablet and notebook lines and onto the desktop. It’s not hard to envisage a further step to home entertainment, with an updated Apple TV using a Magic Trackpad for navigation and control. As it stands, though, the Apple Magic Trackpad is a strong addition to the company’s concise portfolio of branded peripherals, and neatly sates a request many Mac Pro and iMac users have been making. Unless you’re dead-set on using a mouse, I wholeheartedly recommend the Magic Trackpad, hence giving it two-thumbs up.  Price: $69.00 Apple.com