The first MacBook Air powered by Apple’s first M1 Silicon has started shipping and there’s reason to be excited, even if you’re not a MacBook or Apple fan yourself. This new breed of Macs represents not just another turning point in Apple’s history but, given the company’s reputation as a trendsetter, could also make waves in the computing industry in general, tipping the scales away from the likes of Intel, NVIDIA, and AMD. While we take the Late 2020 MacBook Air for a thorough testing, we’re just a little bit too excited to share our first impressions of this important milestone in Apple’s story thus far.

Benchmarks will always only be that but, despite their controversy, they do serve some purpose, especially when comparing different devices from the same family using the same set of tools. It isn’t going to be an accurate indicator of real-world performance but it does set a baseline for talking about it in a more or less controlled setting.

You’ve probably already seen your fair share of benchmarks but here is SlashGear’s contribution to Geekbench’s database of results for future analysis. As you can probably tell, we got a MacBook Air (Late 2020) with the octa-core Apple M1 and 8 GB of RAM. The scores themselves, 1729 for the single-core test and 7491 for multi-cores, are already telling but they paint a fuller picture when compared with its immediate predecessor. 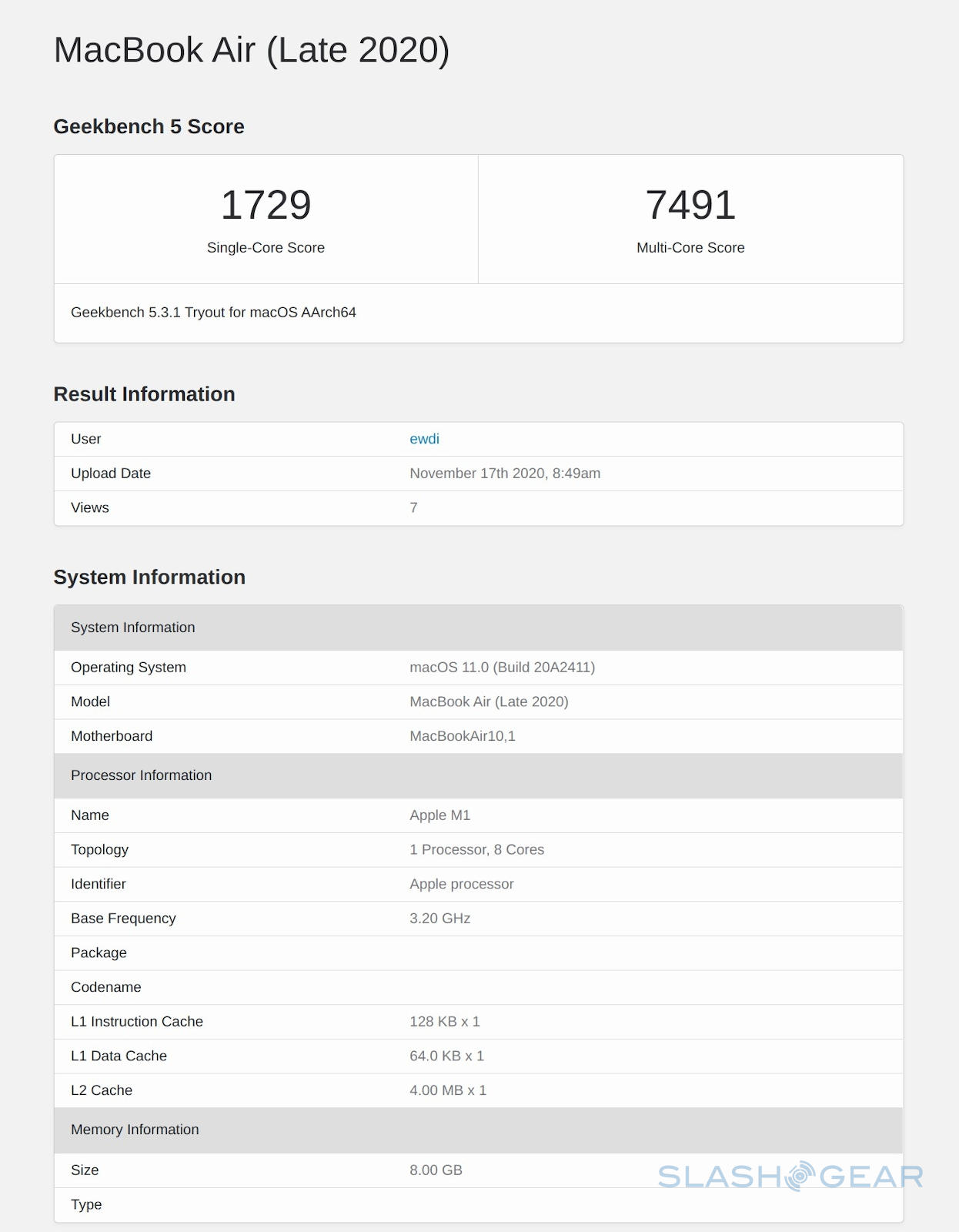 Comparisons will naturally be made between this M1 MacBook Air and the most recent one powered by an Intel processor. And what better ARM, or rather Apple Silicon, versus Intel comparison is there than one between the new M1 and Intel’s current and top of the line chip for the MacBook Air, the Core i7-1060NG7. The numbers speak for themselves and, even with some margin of error, it’s difficult to deny how the Late 2020 MacBook Air squarely beats its Intel-powered predecessor. 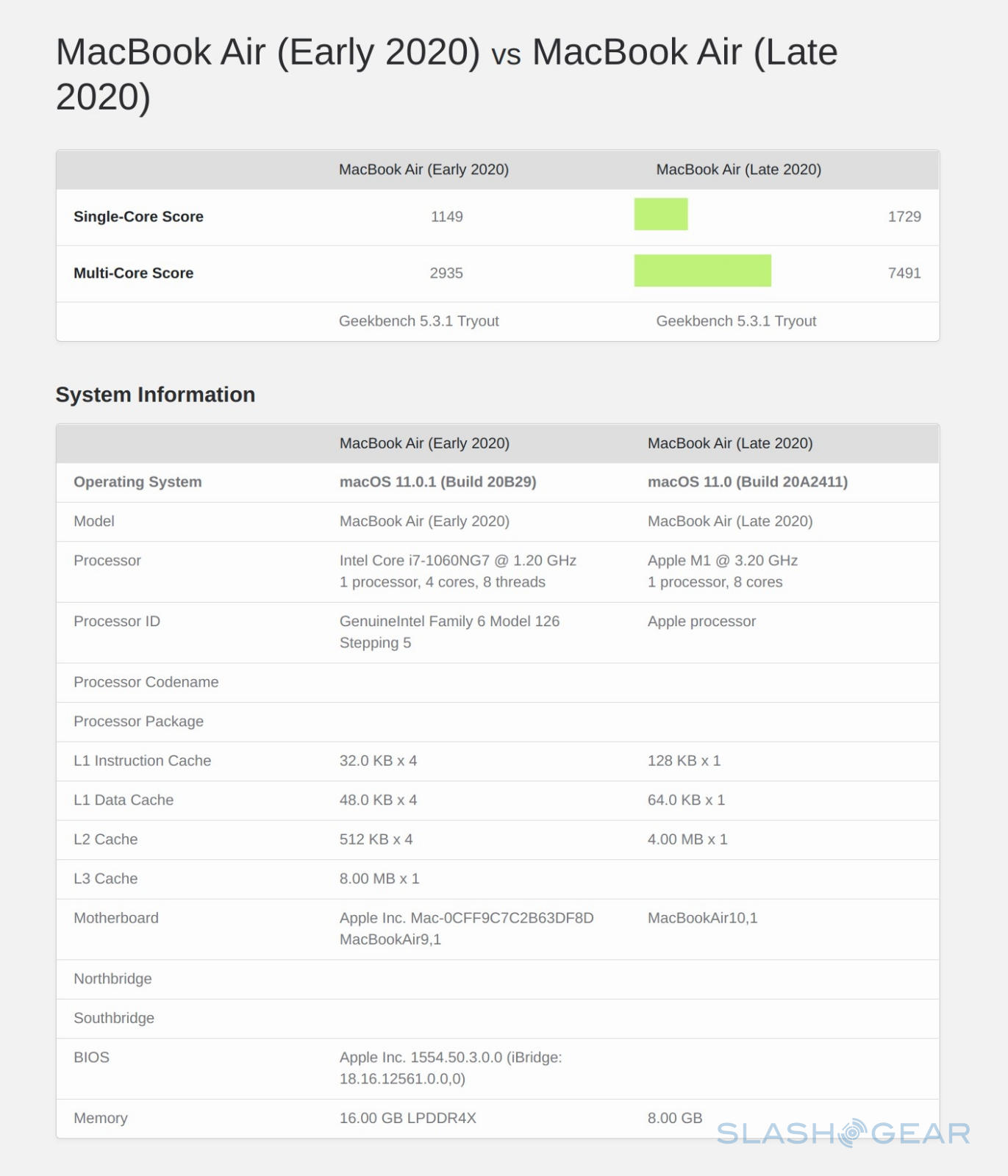 Incredible performance is pretty much pointless if the hardware can’t run much software in the first place. While there might be some popular Mac apps that are still in the process of adapting to the new Apple Silicon world, Apple does offer something that may actually be better, universal apps.

The significance of universal apps can’t be understated, even after the transition period is long over. It makes real the dreams and also the fears of Apple unifying its mobile and desktop platforms while still keeping them distinct. At least for now, it gives M1 MacBook and Mac users popular and powerful apps previously available only on iOS or iPadOS. Case in point is the wildly popular photo and video editor Darkroom, here running on an iPad. 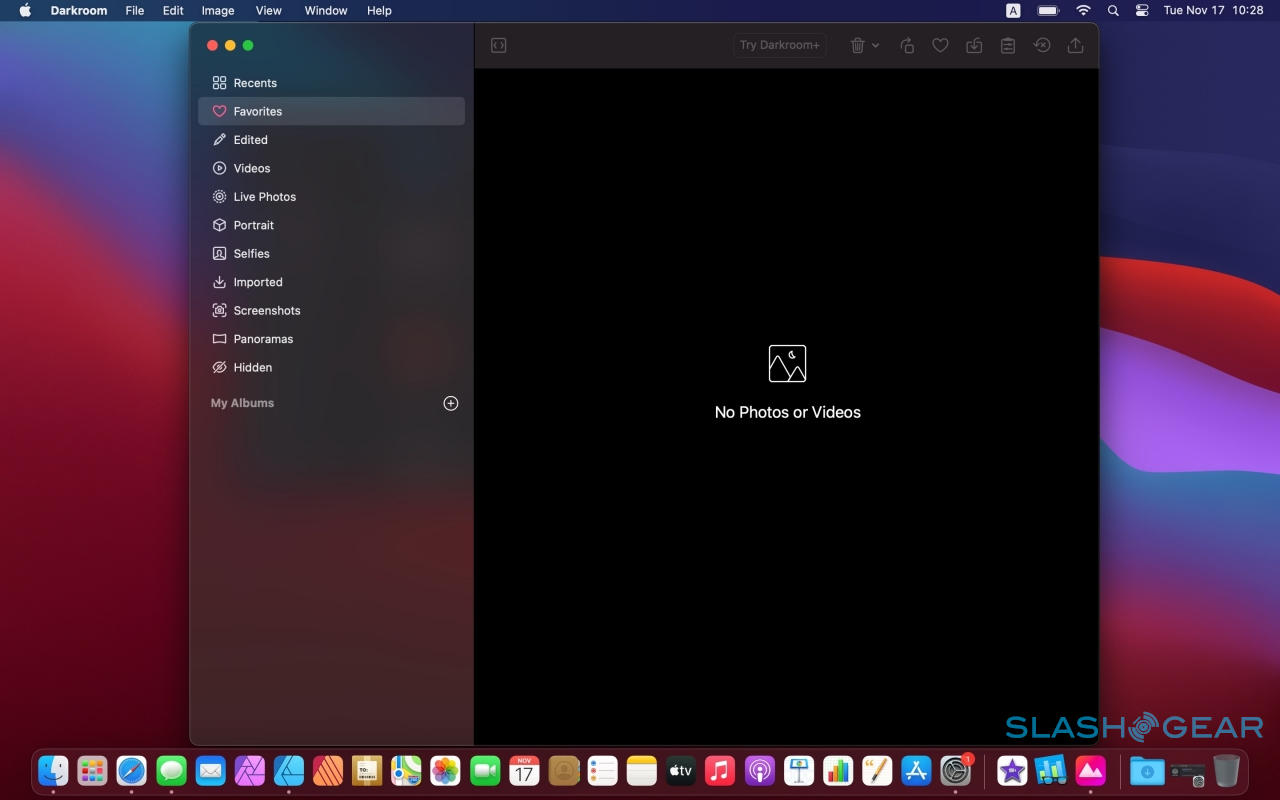 Here’s the exact same app, running on the MacBook Air (Late 2020). Notice any difference aside from the chrome, a.k.a. the user interface surrounding the app itself? That is precisely the appeal and power of Apple’s Universal Apps. 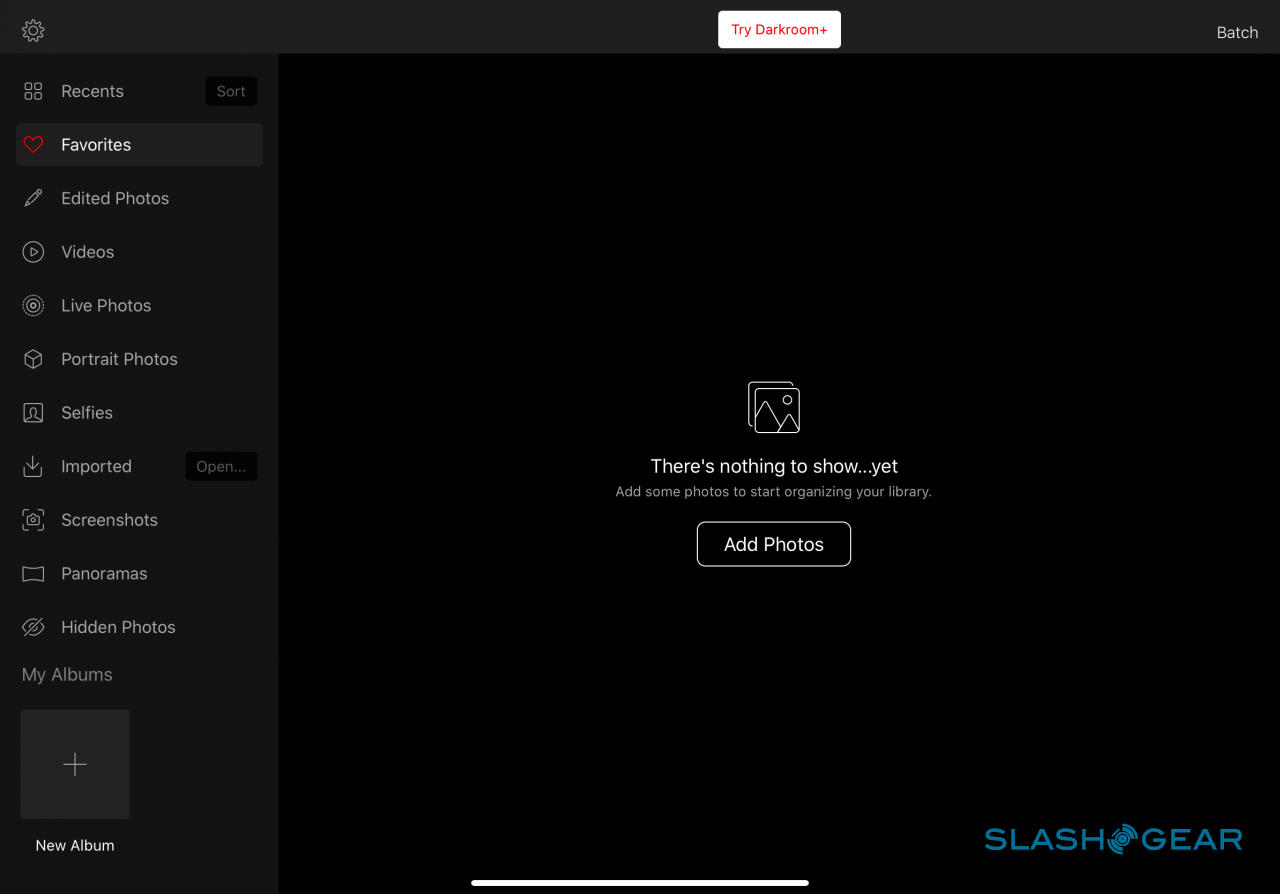 Of course, you will be able to run some of your favorite Mac apps that have been ported to the Apple M1. The performance difference of the same app on two different MacBook Air models, however, is just astounding.

This is just the tip of the iceberg, not just for our in-depth SlashGear review but for the Apple M1 itself. There might still be some rough corners, like software and peripheral support, but those will eventually arrive in due time. It is just the prologue of a new chapter in Apple’s long history and judging by these first impressions, it already looks very promising indeed.