An increasing number of Mac users are getting messages today when trying to open apps purchased from OS X’s App Store that the software is “damaged” and can’t be opened. It seems the issue started appearing as early as Wednesday evening, and can affect a range of popular apps, including Acorn, Tweetbot, 1Password, and Byword. As the error message states, users are getting around the issue by deleting and re-downloading the apps, but it doesn’t seem to work for everyone.

There is no single case that is affecting users, as some say the error message appears for multiple apps, while other say they got it from a single app. Other methods of fixing the issues include logging out and back in to the Mac App Store, or just simply restarting the computer. 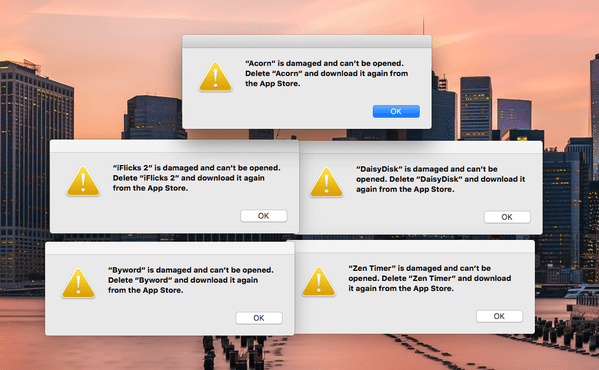 Tweetbot developer Paul Haddad was one of the first to discover and Tweet about the error. Turns out it’s caused by an expired security certificate. These are what Apple uses to verify apps purchased from the App Store.

Apple hasn’t officially commented on the error messages, but since the issues began a new security certificate has been issued, this time with an expiration date of April 2035. Regardless of the exact cause, in all cases, deleting and re-downloading the apps has worked for users, so at worst the issue is a temporary inconvenience.