Lumia phones might get Flip Covers with a second display

As the name clearly points out, Microsoft Research is a division knee deep in R&D. In most companies, however, that acronym is almost synonymous with things that almost never see the light of day, except in a few vestiges. Trying to buck the trend, Microsoft is now trying to make its Research results more prominent, by actually putting them into products or turning them into actual products themselves. And one of those might yet be the most interesting: a flip cover for Lumia smartphones that also act as secondary displays.

Flip covers that are able to do more than just, well, cover are nothing new. LG and Samsung popularized the “window” type of cover that lets you peek and even interact with notifications. At one point, HTC had a unique Dot View cover that conveyed information in a sort of old-school dot matrix display.

On the other hand, a smartphone with a secondary display is rarer but not unheard of. At least not for those who have been following smartphones news. Russian outfit Yota’s YotaPhone is the best example of a handset that incorporates an e-ink display on the back for a second screen. The purpose is to have an always-on display that doesn’t even sip power when showing static information. Plus it makes for a good ebook reader too.

Microsoft Research’s idea is to take the YotaPhone’s second screen and put it on a flip cover instead of embedding it inside the smartphone itself. The location changes but the purpose and benefits stay the same. It can be used for an at a glance screen, for calendars and even Cortana. The idea even includes the ability to be used as a keyboard, which implies some touch sensitivity functionality rather than just a display. 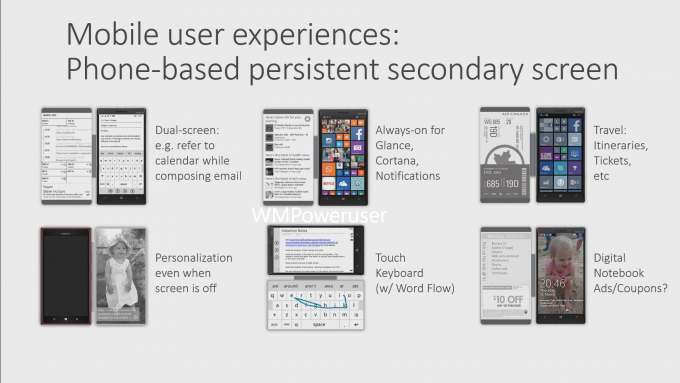 As dreamy as that might sound, there is still no timetable for this accessory. The insider tip is that Microsoft Research is in deep talks with the Lumia team to make that possible. But more than just the hardware itself, such a feature will need to have integration deep inside Windows 10 Mobile itself. Suffice it to say, we’re not going to see it in this year’s Lumia models, especially if there will only be one for 2016.