Our handwriting may have steadily become sloppier as keyboard use increases, but there are still plenty of people who reach for a pen & paper first and QWERTY much later. Livescribe’s Pulse Smartpen promised the best of both worlds, a way of recording not only handwriting but audio as well, and then allowing for digital playback of meetings and lectures. Now, the company’s second-generation model, the Echo Smartpen, promises to finesse the process with more storage and improved ergonomics. Check out the full SlashGear review after the cut. 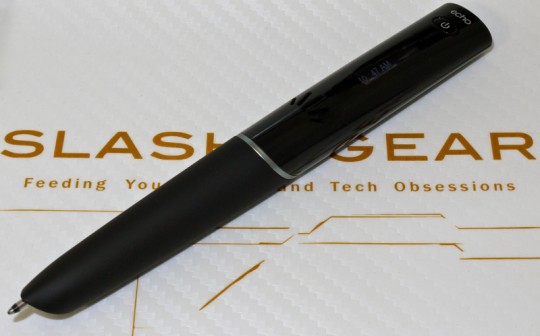 Physically, the Echo is lighter and generally a whole lot more pen-like than its Pulse predecessor, which did feel somewhat like writing with a chunky marker. The grip is now rubberized and the barrel is anti-roll, so you needn’t worry about $170+ worth of digital notetaking hardware accidentally tumbling off the desk and getting stomped on. There’s a standard 3.5mm headphone socket and a microUSB port – rather than the Pulse’s 2.5mm socket and bundled docking cradle – which makes for easier use on the road, while a 96 x 18 monochrome OLED display on the side shows status messages (and the orientation of which can be flipped to suit left- or right-handed users). Storage is also increased, with both 4GB ($169.95) and 8GB ($199.95) versions on offer, while the internal battery is good for over five hours of simultaneous audio and handwriting recording.

Most pens don’t record either of those things, which is why the Livescribe stands out. The base concept is pretty straightforward: using special paper – which has a microdot pattern the tip of the pen can track – you can take notes while also recording audio; tapping the Echo to any point in the hand-written notes triggers playback from that point in the audio. Of course, it’s more complex than just a dictaphone replacement, partly because of the bundled Livescribe Desktop software and partly because of the smarts built into the Echo itself. 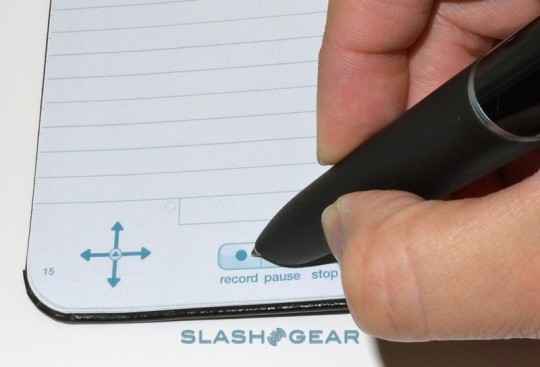 Controls on the pen itself are minimal; that’s because the “buttons” are actually printed on the special Livescribe paper. Running along the bottom of the notebook are audio controls – play/pause, record, fast-forward and rewind – along with other function keys, and these work in tandem with the Echo’s OLED panel. Tapping the pen on the record button begins recording mono audio via the integrated microphone; you can either leave it going on its own or start taking notes simultaneously. If you don’t need an audio recording, simply starting to write will set the Echo storing your handwriting.

The usefulness would be seriously undermined if the Echo Smartpen’s audio fell short, but despite the small microphone we were impressed by the quality Livescribe delivered. Alternatively, the company sells a set of earbuds that include stereo microphones, a $29.95 option, and potentially useful if you’re looking to record in larger halls or meeting rooms. Similarly, the built-in speaker is decent given its size, but for longer playback we reached for some headphones.

Plugged into a PC or Mac, and Livescribe’s bundled software comes to the fore. Notes and audio are automatically pulled off the Echo Smartpen and into the app, organized into different notebooks. As with the pen alone, clicking on text which has an accompanying audio recording will trigger playback from the synchronized point of the clip, and Livescribe Desktop automatically sets notes with audio to a different color for easier differentiation. The PC version of the desktop app is slightly more advanced than its Mac counterpart, unfortunately; the latter misses out on custom notebooks, which can be pulled together using sections of recorded text and audio from other notebooks.

Missing from both, however, is handwriting-to-text conversion, for which Livescribe instead point users to Myscript. A third-party app priced at $29.95, Myscript can convert Echo notes made in any of twenty languages into regular text, useful for transcribing speeches. It’s worth noting that Myscript can’t automatically differentiate between different speakers, so any output generally requires a fair bit of editing before it’s in a state fit for publishing. An optional online account, meanwhile, can be used to publicly share notes, complete with audio. What you can do without Myscript, however, is search-handwritten notes, something we’re used to from Evernote and which is particularly handy. 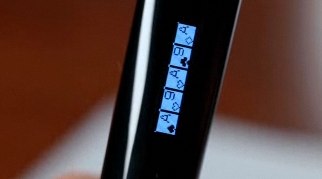 While that would probably be enough for avid meeting attendees, Livescribe are looking to extend the usefulness of the Echo by including an app store. Accessed via the Livescribe Desktop app, with software synchronized over to the Echo via microUSB connection, it turns the Smartpen into a translation tool, a musical instrument or anything else developers can come up with via the free SDK. Unsurprisingly it’s the language apps that are most obviously useful; a dictionary app, for instance, shows definitions of your handwritten word on the OLED screen, while various translation apps can automatically convert your handwritten notes into other languages. Of course, developers are also coming up with more unusual software, so you can sketch out strings or staves and play your notepad as a guitar or piano, convert currency or even play games like Sudoku.

The success of these apps vary with how willing you are to draw out the required boards or grids, but the better titles neatly take the Echo to the next level in functionality. It’s worth noting that not all are free, however: like in the iPhone App Store, developers can choose to distribute their software at a price. The American Heritage English Dictionary, for instance, is a hefty $14.99. Livescribe has a few future tweaks of their own in mind too, with a promised update that will turn the Echo into a (tethered) graphics stylus similar to a Wacom digitizer, together with the ability to handwrite emails and have them automatically send as soon as they’re synchronized.

Livescribe include two ink cartridges and a single notebook with the Echo, but of course they won’t last forever. A five-pack of replacement cartridges is $5.95 and available in various colors and thicknesses. As for the paper, Livescribe offer several different types and sizes of notebooks, priced from $7.95 for a single pad through to $24.95 for a twin-pack of Moleskin-styled journals. Alternatively, the Livescribe Desktop app allows you to print your own dot paper, though you’ll need a 600dpi capable printer in order for it to work. 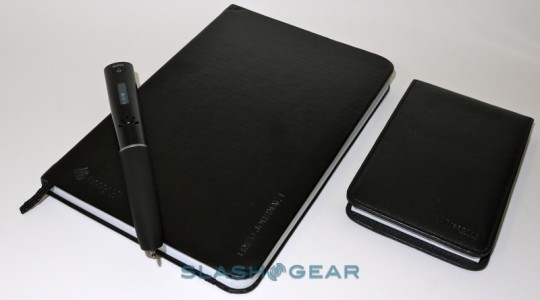 Battery life proved roughly in line with Livescribe’s estimates; you can prolong use by making handwritten notes only – the company say you’ll get over 12 hours worth that way, and we certainly had enough space for a day of heavy note-taking with room to spare. You’ll need to have access to a computer to recharge the Echo however, since Livescribe don’t include an AC adapter in the box.

Still, it’s a minor gripe (and readily fixed thanks to the standard microUSB port) and does little to diminish the Echo Smartpen’s appeal. Students, those who find themselves frequently attending meetings or briefings, and anyone who worries about losing their paper notebooks and would like to have a digital backup will find plenty to like about the Livescribe Echo. Meanwhile the Pulse – with 2GB of storage and lacking some of the refined features of the Echo – is still on sale, reduced to $129.95 but still having access to the updated Livescribe Desktop software and app store. 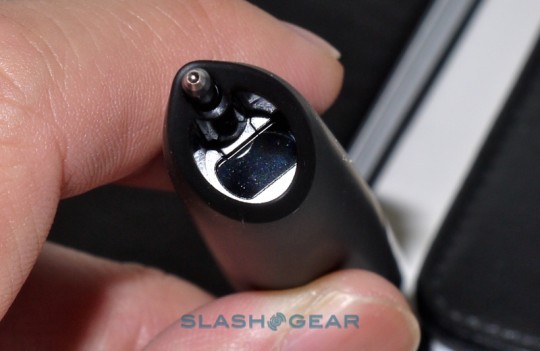 Despite the popularity of notebooks, netbooks and the iPad, there are still legions of people who find handwritten notes – and indeed diagrams – easier to make than typing. The Echo offers a brilliant crossover of the two, with the benefits of ink paired with the flexibility of digital. While the app store still feels gimmicky in places, and the companion software still requires a little polish (particularly in the Mac version), the underlying functionality makes for a device both useful and with real longevity. In conclusion, Echo smartpen is one of a handful of products I recommend with two thumbs up for anyone requiring accurate and details notes.  Check out Livescribe’s website for more details.

This entry was posted in Accessory Reviews, Archive, Reviews.
Must Read Bits & Bytes