Sprint and Kyocera joined forces to reveal the very first dual touchscreen Android phone–the Echo–at this evening’s special “Industry First” event hosted by Sprint. Our guys are there live and and ready to bring the scoop. So far a super sized version of the phone has been on stage that unfolded itself to show an amazing dual screen. Their goal is to create a tablet-like device that that can easily fold up and fit into your pocket.

In single screen mode, the Echo sports a 3.5 inch WVGA screen and functions like a touchscreen smartphone. With dual screens open you get a 4.7 inch screen and you have the option of going into Simul-Task mode which allows you to operate two apps at the same time, one on each screen. And then there’s Optimized Mode that supports the optimized features on one single app split across both screens. And then lastly the Tablet Mode that allows you to spread one app across both screens especially good for viewing maps, videos, or websites. 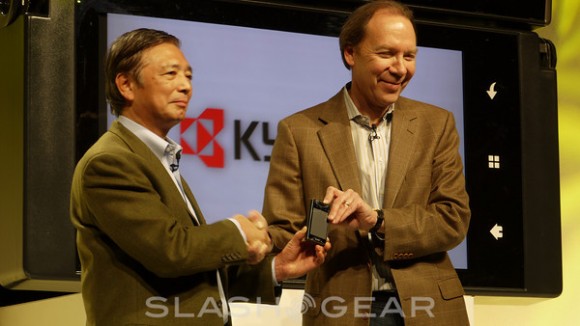 The Kyocera Echo is priced at $199.99 with a new two-year service contract eligible for upgrades after a $100 mail-in rebate. The phone will be available this Spring.

Two screens connected by an innovative pivot hinge offer the ability to complete two tasks at once, taking the ability to multitask to a powerful new level

Available this spring for $199.99 after mail in rebate;
Visit sprint.com/echo to pre-register and check out images of the
only Android phone with two screens

Until now, a single screen on a smartphone could only be used to complete one task at a time, even with limited multitasking capabilities available on some smartphones. Kyocera Echo’s second screen provides the ability to do two things at the same time and get more done – send an email on one screen while surfing the web on the other, watch a video on one screen while texting on the other, comparison shop online with one web site on each screen and so much more.

Images and video of Kyocera Echo’s dynamic design in action are available now at www.echobykyocera.com. Pre-registration begins today at www.sprint.com/echo.

In its closed position, Kyocera Echo is a pocket-friendly, single-display smartphone. When opened, Kyocera Echo reveals a revolutionary new platform for wireless multitasking and gives customers a new level of versatility in Android. Its innovative hardware and optimized software enables consumers to use the touchscreens in four unique ways:
• Single-Screen Mode with all the functionality of a single-display, touch-screen smartphone.
• Simul-Task™ Mode with two of the phone’s seven core apps (messaging, e-mail, Web browsing, phone, gallery, contacts and VueQue™) running concurrently but independently on the dual displays – e.g., reading e-mail on one screen and opening a text message on the other; checking Facebook® via the browser on one screen while looking through a photo gallery on the other; or even searching the Web on one screen and checking email on the other.
• Optimized Mode with both displays supporting a single, optimized app with complementary functionality and enhanced usability – e.g., composing e-mail on one screen with a touchscreen keyboard on the other; watching a YouTube™ video on one display while browsing and queuing additional YouTube videos on the other (with a preloaded Kyocera app called VueQue™); or viewing gallery images on one display while browsing image thumbnails on the other.
• Tablet Mode with one application spread across both displays for a full 4.7-inch viewing area. Tablet Mode is ideal for viewing maps, videos, websites, detailed documents, and long lists on-the-go.
“Sprint is proud to boast the most powerful Android portfolio available today and Echo adds to that legacy with industry-leading technology that will change the way our customers use smartphones,” said Sprint CEO Dan Hesse. “Today’s busy schedules often demand that we do at least two things at once. Kyocera Echo is the first device that allows us to do a different task on each of two screens while also providing a tablet-like, larger screen experience that easily fits in a pocket when closed.”

Kyocera Echo will be available this spring for $199.99 with a new two-year service agreement or eligible upgrade and after a $100 mail-in rebate in all Sprint retail channels, including the Web (www.sprint.com) and Telesales (1-800-Sprint1). Pricing excludes surcharges and taxes.

“For years Kyocera has provided handsets to Sprint’s Prepaid Group and MVNOs, as well as to Sprint under the Sanyo brand,” said Eiichi Toriyama, president of Kyocera Communications Inc. “We value greatly our relationship with Sprint and we are thrilled that they have chosen Echo as the standout product with which to reintroduce its customers to the Kyocera brand. With Kyocera Echo, we are proud to give Sprint an iconic, industry-changing device that delivers an entirely new experience for smartphone users.”

Kyocera Echo also includes customized apps optimized for the dual-screen Optimized Mode experience including VueQue™, which lets users watch a YouTube video on one display while browsing, queuing and buffering additional YouTube videos on the other display. Additional applications optimized for the dual-screen experience include:
• Messaging and e-mail: Users can turn the device horizontally and use the top display to view the e-mail/message application while using the lower display as a full-sized virtual keyboard.
• Browser: Takes the browser experience of a standard 3.5-inch smartphone and enhances it, allowing users to view two websites simultaneously.
• Gallery: Users can scroll through thumbnail images on one screen while viewing an enlarged image on the other.
• Contacts/phone: Users can view more of the phone’s contact directory or an expanded virtual dial pad.

A Software Development Kit (SDK) and developer guide for Kyocera Echo will be available before the launch on the Sprint Application Developer Program (ADP) website at http://developer.sprint.com/android. The developer guide will provide details on developing for a dual-screen handset and Android 2.2 device. It also will provide information on how to take advantage of Kyocera Echo’s unique hardware and software capabilities on the Sprint Network. The Sprint ADP has been providing tools for third-party developers since Sprint first launched the Wireless Web on its phones in 2001.

Some competitors may offer lower prices, but Sprint customers get more with unlimited data while on the Sprint Network with their monthly plan. Sprint offers real simplicity, value and savings vs. competitors, making it easy for customers to get the most out of their phones without using a calculator to tally up costs or worrying about how much data they’ve used.

An optional charge of just $29.99 per month turns on Kyocera Echo’s mobile hotspot feature, connecting up to five Wi-Fi enabled devices, such as laptops, gaming devices and digital cameras, at 3G speeds anywhere on the Sprint 3G network (pricing excludes surcharges and taxes).

Sprint Nextel offers a comprehensive range of wireless and wireline communications services bringing the freedom of mobility to consumers, businesses and government users. Sprint Nextel served more than 48.8 million customers at the end of the third quarter of 2010 and is widely recognized for developing, engineering and deploying innovative technologies, including the first wireless 4G service from a national carrier in the United States; offering industry-leading mobile data services, leading prepaid brands including Virgin Mobile USA, Boost Mobile, Common Cents Mobile and Assurance Wireless; instant national and international push-to-talk capabilities; and a global Tier 1 Internet backbone. Newsweek ranked Sprint No. 6 in its 2010 Green Rankings, listing it as one of the nation’s greenest companies, the highest of any telecommunications company. You can learn more and visit Sprint at www.sprint.com or www.facebook.com/sprint and www.twitter.com/sprint.

Kyocera Communications Inc. (KCI) is the headquarters for Kyocera- and Sanyo-branded wireless products and accessories in the Americas. The company’s devices are driving the convergence of telecommunications, broadband and multimedia. KCI was formed in April 2009 through the combination of Kyocera Wireless Corp. and Kyocera Sanyo Telecommunications Inc., two wholly owned subsidiaries of Kyocera International Inc. The former was created when Kyocera purchased QUALCOMM Incorporated’s consumer wireless phone business in 2000, while the latter was formed when Kyocera purchased the wireless phone business of Sanyo Electric Co., Ltd. in 2008. Based in San Diego, KCI leverages Japan’s history of creating advanced consumer technologies around humanism and respect for the environment and blending them with a Western entrepreneurialism and style, resulting in a unique design language and a natural, user-friendly interface. For more information, please visit http://www.kyocera-wireless.com or follow the company on Facebook at www.facebook.com/kyoceramobilephones.

Kyocera Corporation (NYSE:KYO) (TOKYO:6971) (http://global.kyocera.com/), the parent and global headquarters of the Kyocera Group, was founded in 1959 as a producer of fine ceramics (also known as “advanced ceramics”). By combining these engineered materials with metals and plastics, and integrating them with other technologies, Kyocera has become a leading supplier of telecommunications equipment, office-document imaging equipment, solar power generating systems, semiconductor packages, electronic components, cutting tools and industrial ceramics. During the year ended March 31, 2010, the company’s net sales totaled 1.07 trillion yen (approximately US $11.5 billion). Kyocera marked its 50th anniversary in 2009, and the 40th anniversary of its U.S. operations. It is ranked #554 on Forbes magazine’s 2010 “Global 2000” listing of the world’s largest publicly traded companies.