Linedock 16″ Review: Portable ports and power for your MacBook Pro 16″

Some Mac accessories are stylish and some are practical, but the Linedock 16″ aims to satisfy on both counts as it adds power, ports, and storage to your MacBook Pro 16-inch. A Mac-matching slice of aluminum, it slots under your laptop but then tackles some of the biggest complaints users of Apple’s portable flagship, including adding not one but two full-sized SD card readers.

This is Line’s second Linedock model, the first taking the same approach but for the 13-inch MacBook Pro and MacBook Air. In fact it’s been a while since the company first showed off the Linedock 16″, back at CES 2020 in fact. Pandemic-related delays pushed the launch back to today. 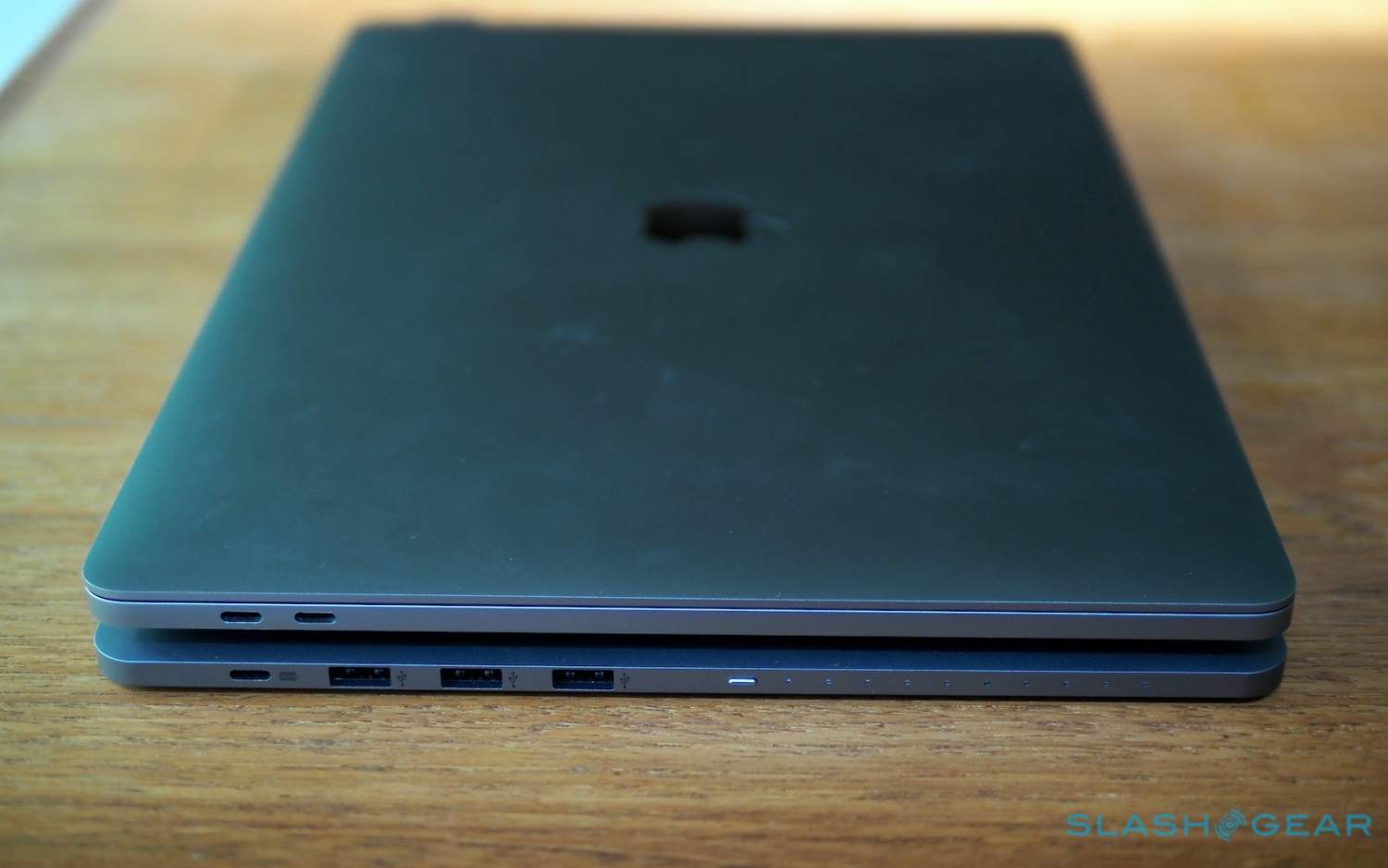 At its most basic, Linedock is a portable battery. Unlike most, though, it just happens to be long, wide, and very flat: exactly the same footprint, indeed, as a 16-inch MacBook Pro. That’s not by accident, of course, since the primary way Line envisages you using the Linedock is with your Apple laptop stacked on top of it. A small two-plug USB-C dongle which Line calls the Cubicable connects them both, or you can use a USB-C cable; I found Line’s dongle could block an adjacent USB-C port on the laptop, so a small cable might be the better route. 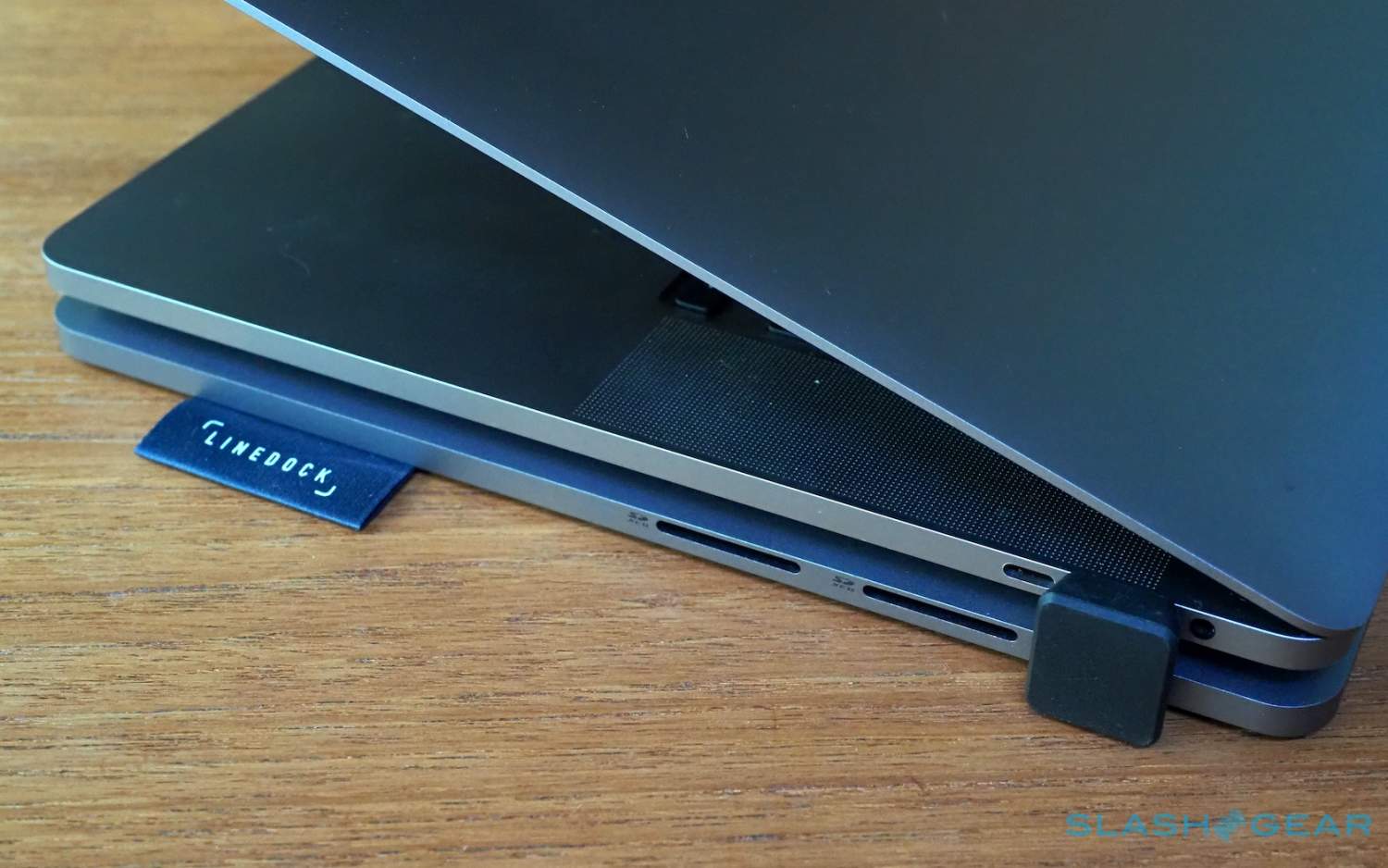 The battery itself is 27,000 mAh, or 99.9 Wh, which is basically the same as what Apple squeezes into the MacBook Pro as well. As a result, you’ll get a single full charge of the notebook from the Linedock, which is more than most portable batteries can promise.

As anybody who has tried to top up away from an outlet knows, though, there’s more to mobile power than just sheer battery size. The Linedock 16″ has two USB-C 3.1 Gen 2 ports and they can deliver up to 100W of output: a little more, indeed, than Apple’s own MacBook Pro 16 USB-C adapter supplies. That plugs into the USB-C power input on the back of the Linedock. 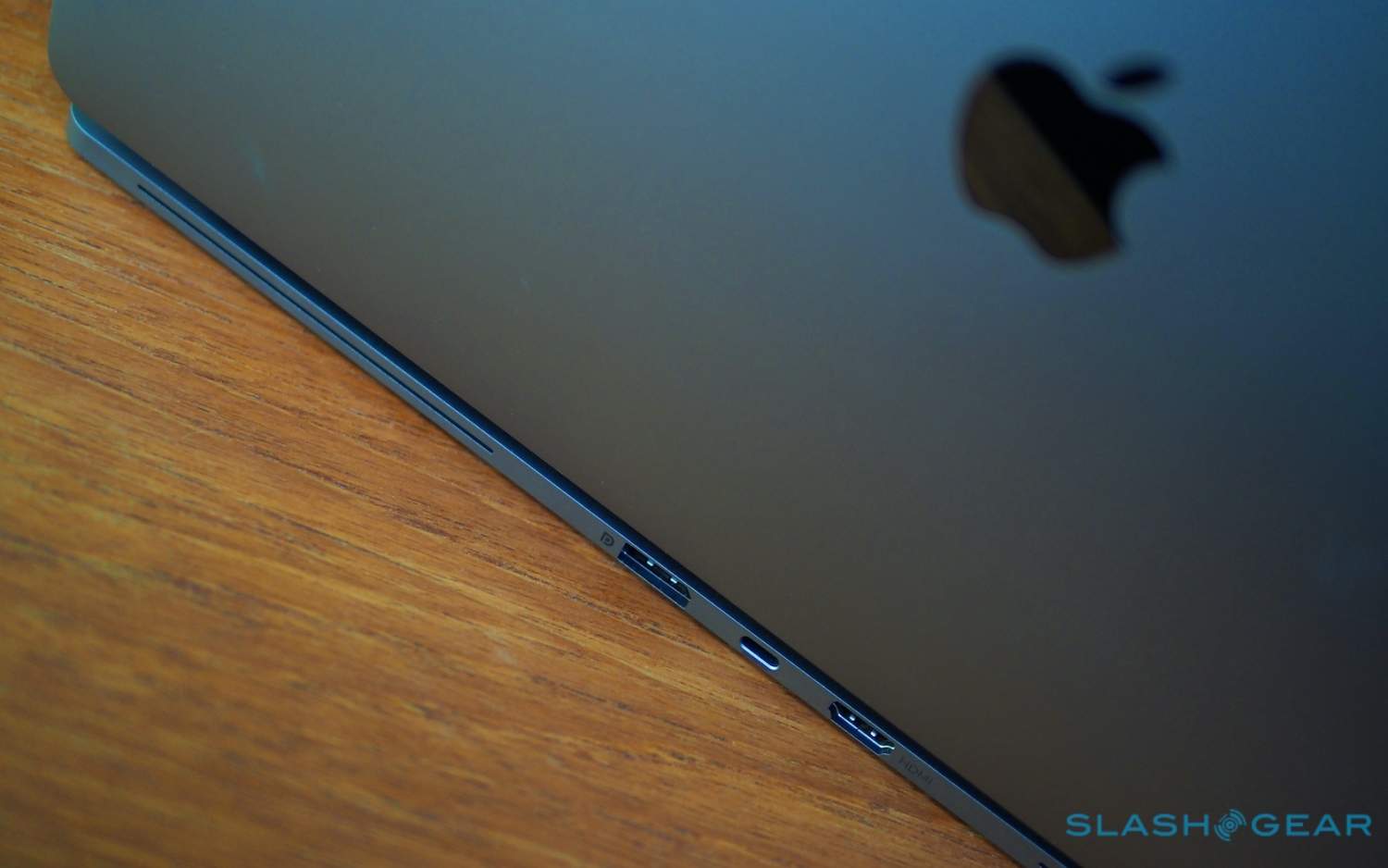 How Line handles power is thoughtful, too. The Linedock starts supplying power when you hit the battery meter button on the side, which shows current state of charge with a row of white LEDs. Even if its own battery is low, it’ll prioritize pass-through charging your MacBook Pro first. You can of course plug in iPhones and other accessories into the USB-C or USB-A ports – it’ll fast-charge two iPhone 12 simultaneously, or up to six USB devices – and it’ll automatically allocate what power it can deliver to suit.

All those ports allow the Linedock 16″ to double as a mobile docking station. In addition to the three USB 3.0 Type-A (5 Gb/s) and two USB-C (10 Gb/s), there’s an HDMI port that can drive up to a 4K 60Hz display and a DisplayPort for up to a 4K 30Hz display. There’s not one but two SD UHS II card slots (350 Mb/s), and they’re the same style as a digital camera, with the card slotting all the way inside rather than half-hanging out where they could be easily damaged in transit. 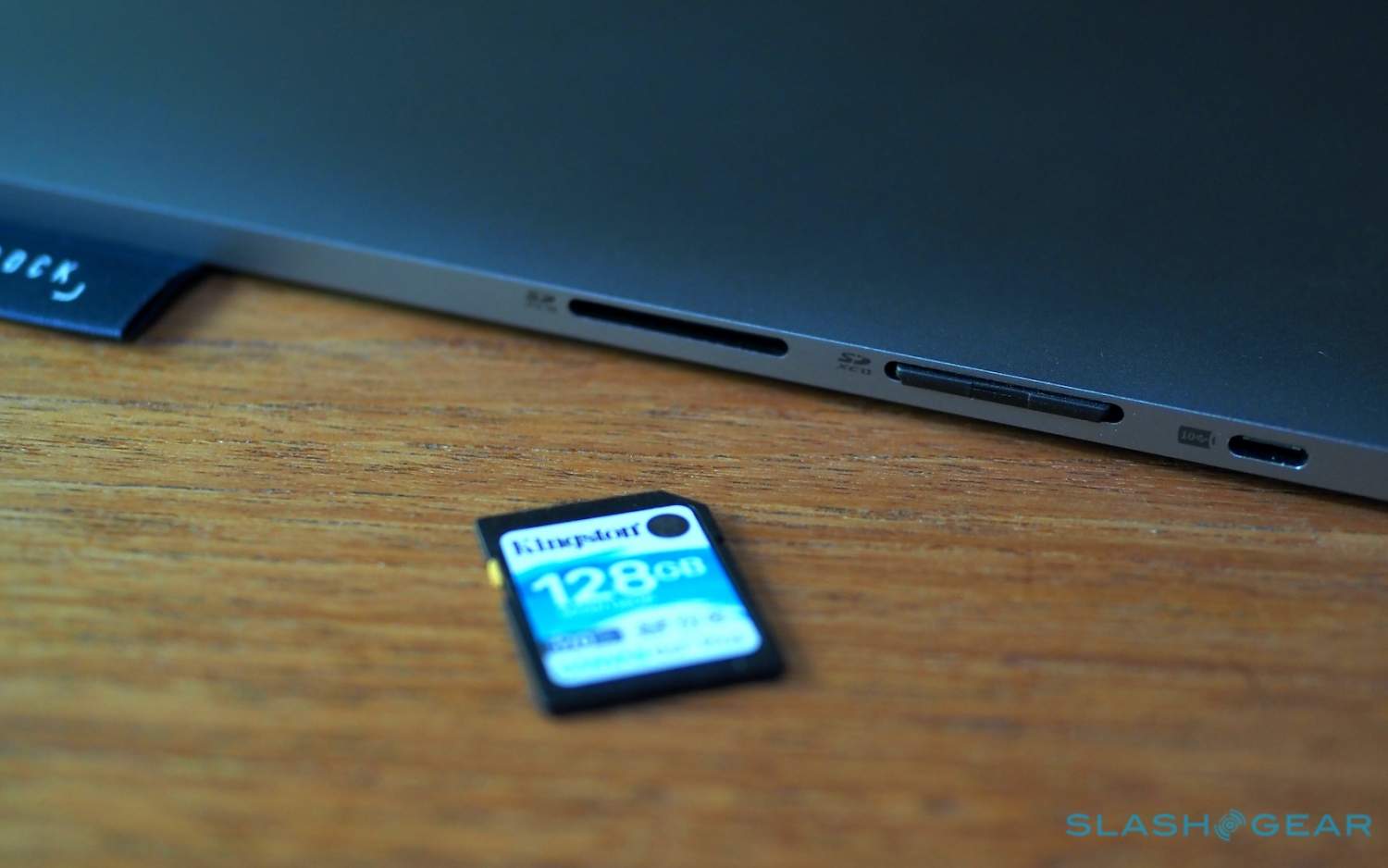 Finally, inside there’s optionally an SSD for extra storage. The $479 Linedock 16″ has no storage, while $679 gets you 1TB and $839 gets you 2TB. It shows up in macOS as just another external drive, and can be used for day to day storage or a Time Machine back-up. Expect up to 415 MB/s read speeds and up to 405 MB/s write speeds from the SATA 6 drive, Line says, though sadly you can’t upgrade the SSD yourself and keep the warranty (or, indeed, do a DIY install if you bought the non-storage model and subsequently change your mind and keep the warranty). Line promises it can do that for you, though.

If your laptop bag has a thick enough compartment, you can of course carry the Linedock 16″ around with you. It’s 0.38 inches thick – so slightly more than half the thickness of the laptop itself – and is about a pound less, at around 3.23 pounds. You’re definitely going to notice its addition, then, but then the same goes for any battery of this size. 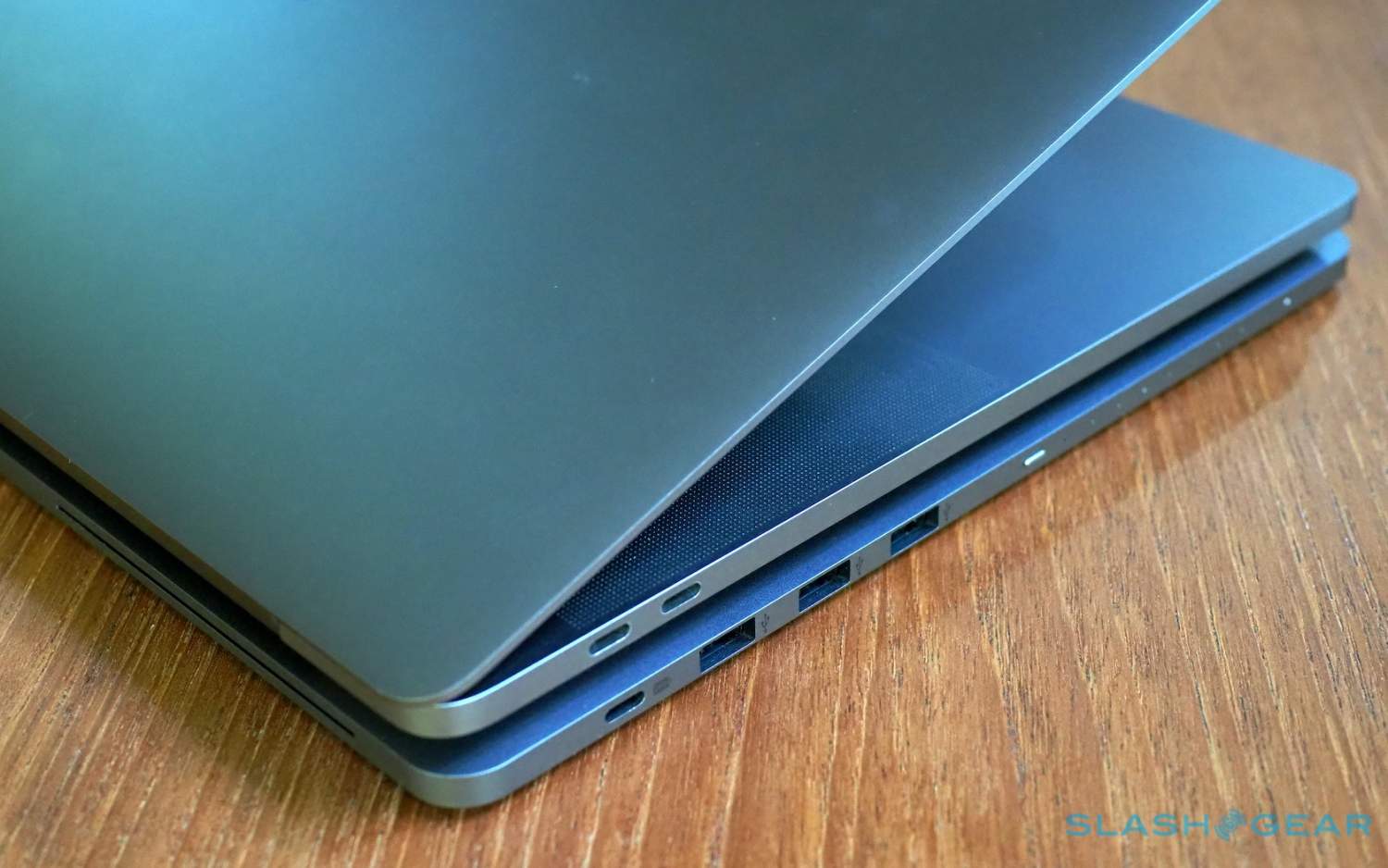 I can’t fault Line’s aesthetics or build quality. The Space Gray aluminum casing matches that of the MacBook Pro nicely; even the vent openings are sleek slits on the front and rear. In use, if you’re using laptop and battery stacked on your lap and pushing the SSD, it can get a little toasty, but no more than the MacBook Pro alone.

Like most MacBook Pro 16 users, I typically carry at the very least my charger, an SD card reader dongle, and a USB-C to USB-A dongle. Having not only that, but multiple extra ports and all that power has been a welcome enhancement, and the ability to offload files to the onboard storage is a boon, too. 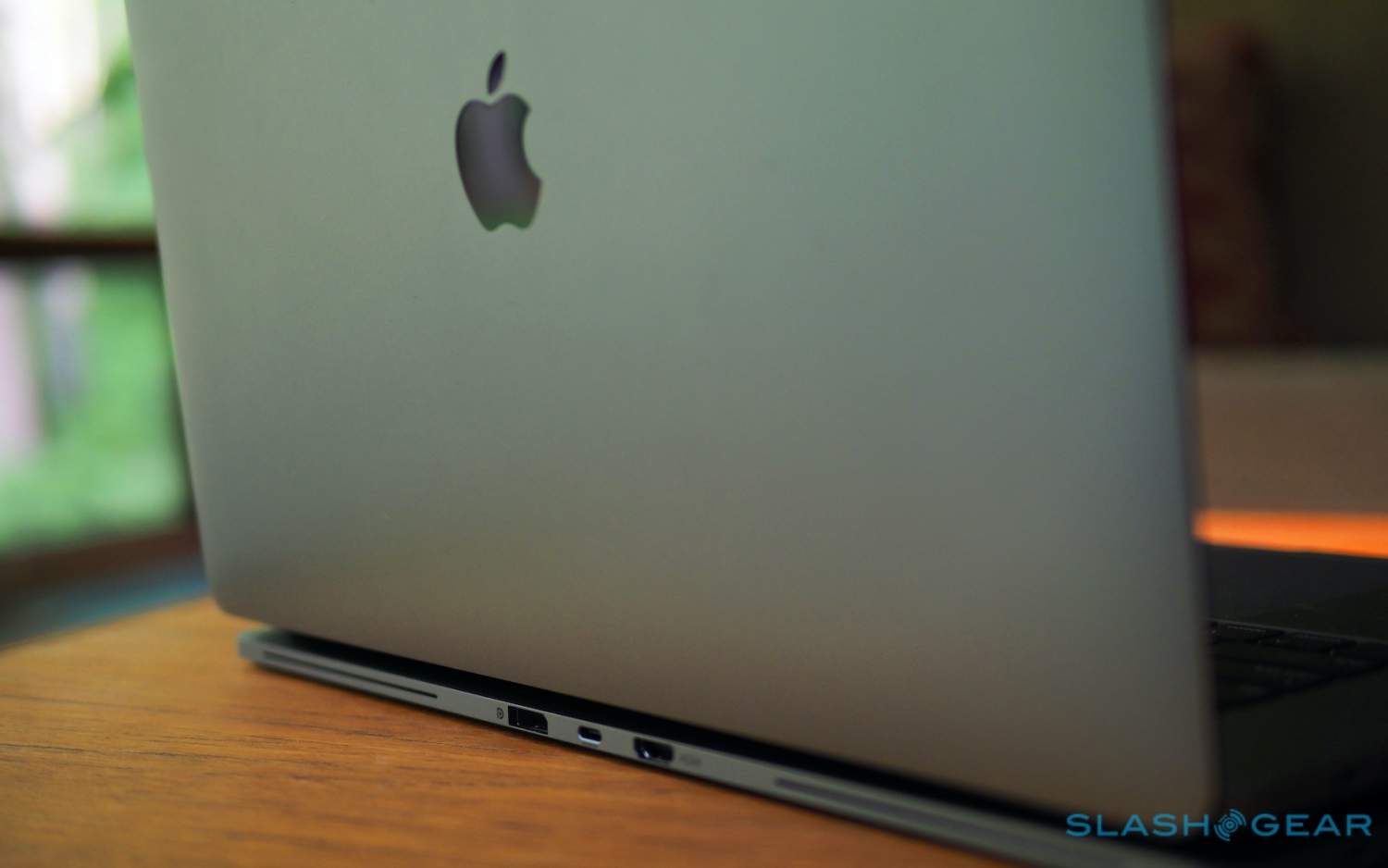 There are a couple of ergonomic annoyances, mind. With laptop stacked on battery, the keyboard is noticeably higher than normal; depending on your chair height, I’ve found that can lead to the front edge of the Mac digging into my wrists. I’ve also been wary of the link between the two: there’s no flex in Line’s dual-USB-C connector, and it feels like it could be easy to inadvertently put undue pressure on it should you lift the MacBook Pro but not the Linedock too. Some way of fixing the two together might help, there.

For desk use, meanwhile, I’ve considered picking up some sort of stand that would hold the Linedock upright but still give access to the ports. 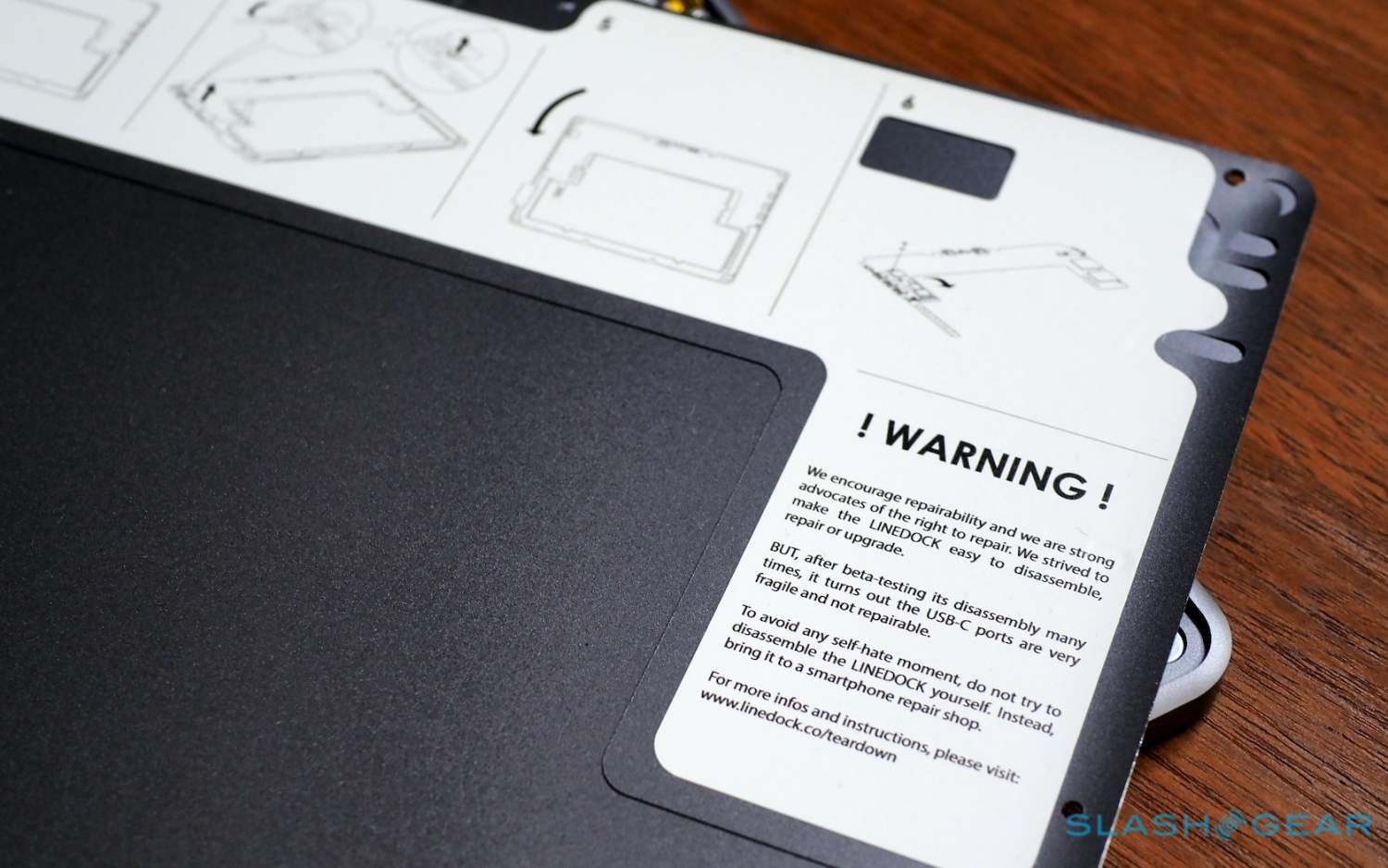 It’s clear Line has given serious thought to the Linedock’s design. Unscrew the bottom cover, indeed, and you trigger an LED light show on the mainboard itself, a flickering animation of the product’s path from production to the rest of the world. There’s an attention to detail there, plus a playfulness which is charming. 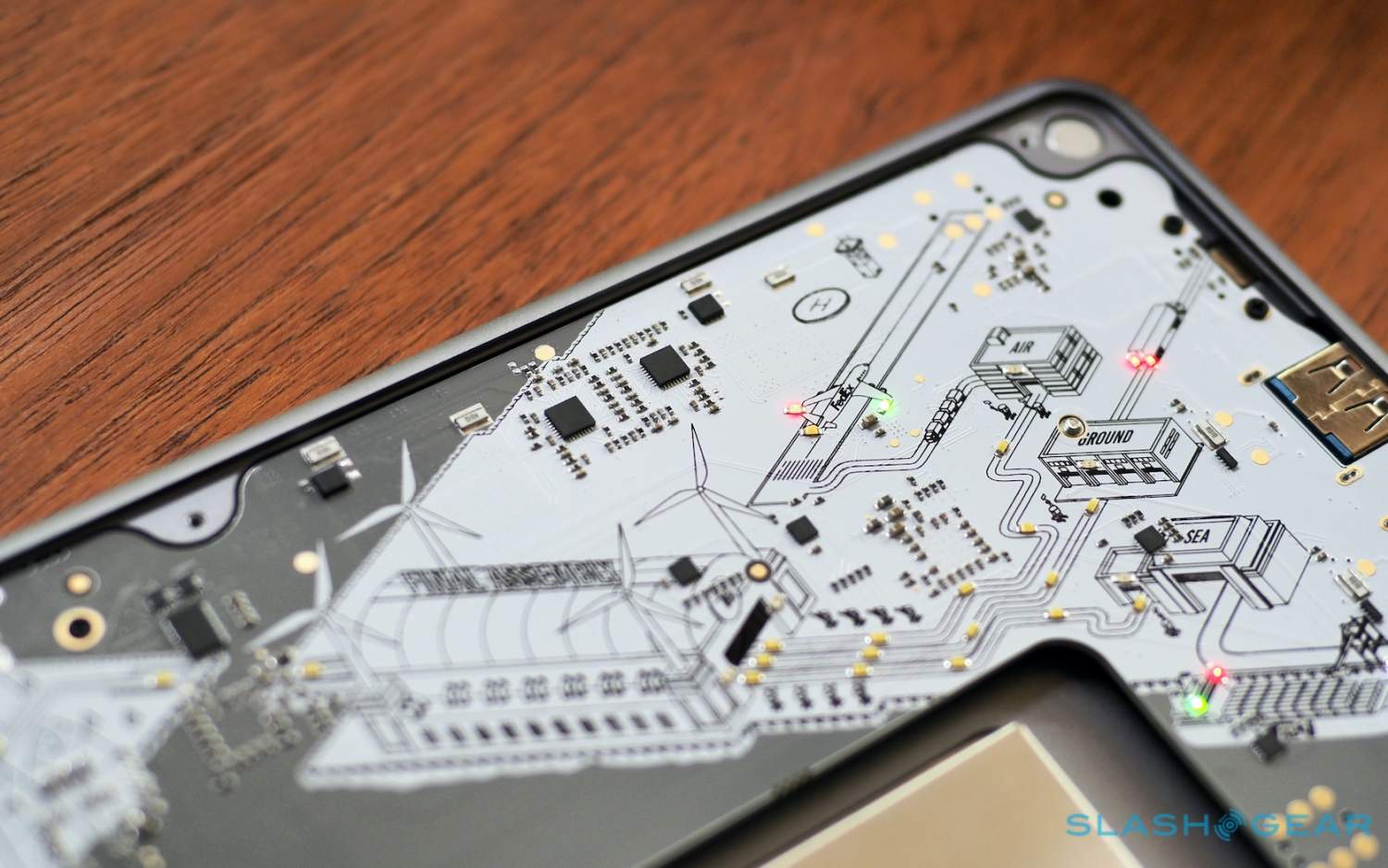 Of course, the flip side to such a honed design is that Apple could upset, well, the apple cart. We’re expecting a replacement MacBook Pro 16 using Apple Silicon, after all, and there’s no telling if it’ll be the right size to match this Linedock. Functionally it should still all work, it just may not look quite as slick in a stack.

Paucity of ports has been the long-standing criticism of Apple’s MacBook Pro, though with everything from cheap dongles to full-blown docks the aftermarket has moved to fill that gap. Line’s approach is certainly one of the most elegant, with the Linedock taking up no extra space on your desktop and yet still delivering – unlike some rival docks – more than the bare minimum of ports. 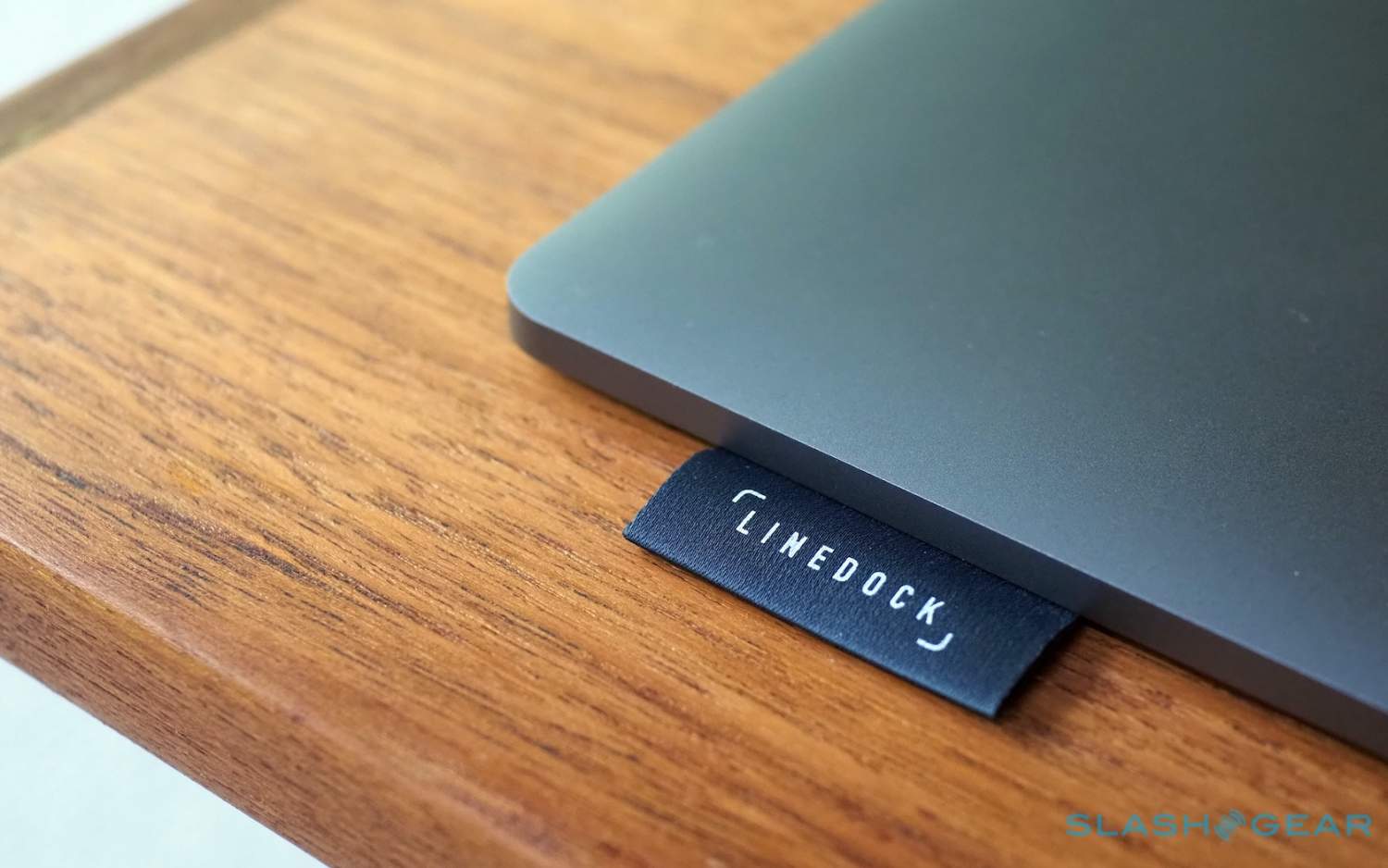 If all you need is a handful of USB Type-A and maybe an SD card reader, the Linedock is probably overkill. The absence of ethernet, too, could be a dealbreaker to some, and the fact that Line doesn’t use Thunderbolt 3 means you’re not getting the maximum throughput your Mac’s ports could handle. Of course, you could also opt to piece together dock, battery, and extra storage and come out with a cheaper, messier solution than Line’s all-in-one slice.

In the end it’s that messiness which may sway you. A single connection to hook-up everything the Linedock 16 offers just has an inherent elegance to it. If you prize design as much as functionality, and don’t mind putting all your eggs in one basket when it comes to ports, power, and storage expansion, there are few externals upgrades for a MacBook Pro that look this sleek and work this smoothly.