Light Up inSoft pillow will have you awake all night

When it comes to gadgets, its not often that one will catch your eye for its softness, but that’s just what designer Takaaki Oguchi has done with this one – it’s a light up pillow. Without a doubt the most comfortable bit of technology I’ve seen all week, Oguchi’s “inSoft” LED light pillow has the ability to light from within without making your ear go “ouch!” Through a combination of cool-burning LED lights and padding that’ll allow just so much light to travel through it surrounding the light module, Oguchi may well have created the nightlight every kid is staying awake at night screaming about.

This isn’t a completed project, kids, I’m sorry to say, but it is on its way to becoming one. This is what’s known as a conceptual industrial design, one made by the designer without as much regard for the final product as one further down the production line would have. It is through projects like these that the most innovative concepts are brought to life – and of course, to light. Soft enough of an idea for you? 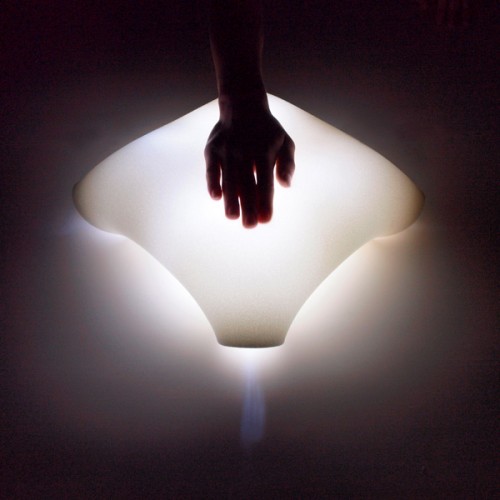 Meanwhile this pillow object has already been making the rounds abroad. The inSoft pillow has won the prestigious Koizumi Lighting Award, this bringing it closer to the production floor once more. Now we’ve all just got to find someone with a load of cash to put under the pillow, as it were, so that we can all have one straight from the store. Light em up!