With all the Android smartphones to choose from, the field of competition is getting a little crowded. However, the 4G battle field has a much lower population. (There is a separate battle about what 4G actually means. See the SlashGear 4G section for more on that discussion). Now LG is bringing the newly released Revolution to the battlefield. The Revolution was released on Verizon’s LTE network. Since the Revolution is only the third LTE phone, there is even less competition on the LTE playing field. It is no secret that we love the speeds possible on LTE, but does the Revolution have what it takes to compete with the glossy hi-def display of the Droid Charge, or the performance of the HTC ThunderBolt? Check out the full SlashGear review after the cut.

The Revolution has a big, black, solid feel to it; very no nonsense. Its size and weight are similar to the other Verizon LTE phones; it measures 5.03 x 2.63 x 0.52 inches and weighs 6.6 ounces. But it does not compare to the glossy plastic balloon like appearance of the Droid Charge, and its overall appearance is more sturdy than the ThunderBolt. Not everyone is looking for a phone with an ominous presence, but overall we liked the simplified Zen look. The face is covered almost completely by the display, with a small strip of matte black along the bottom. The speaker and 1.3 megapixel camera are at the top of the face with the power button and headphone jack on the top edge. The LED indicator and proximity detector are almost invisible at the top of the face. The USB charging port is under a chrome cover on the left edge. The volume control and HDMI port are on the right edge. There is a microphone on the back and another mic on the bottom edge. A speaker is on the back with the 5.0 megapixel camera and flash. The back is matte plastic that almost has a rubberized feel. 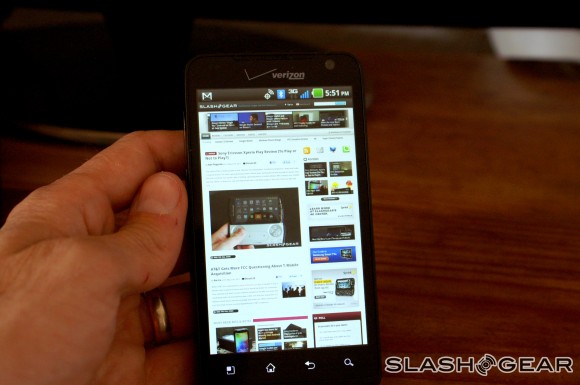 The first major disappointment was the Android Froyo OS (2.2.2). Now we aren’t knocking Froyo, it’s not like we are talking about Windows ME. Froyo is a great OS that is compatible with almost all apps on the Market right now. But the key is “right now.” With the release of Gingerbread and now Honeycomb, that makes some wonder how long before Froyo goes the way of the Laser Disk. (That cross between a giant CD and a vinyl record) 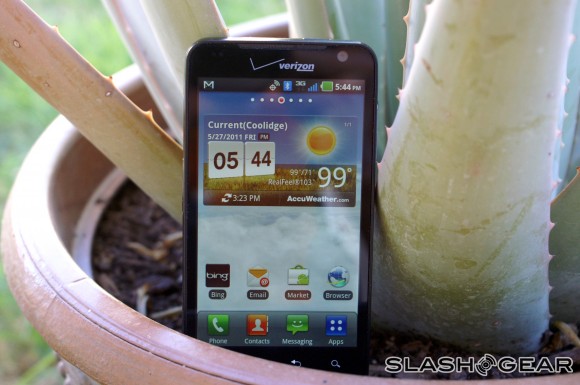 One plus is the Revolution’s custom UI. The menus on the Home screen (portrait orientation only) and the organization of the apps menu are not the plain Jane UI. With the 7-tabbed Home screen it is easy to drag-and-drop apps and widgets to personalize your phone. The UI is very intuitive and easy to get used to, but some consumers would prefer the plain Jane Android Froyo UI. Another big plus is the full HTML web browser; no need to be restricted to mobile friendly sites. Revolution comes pre-loaded with the Swype keyboard, with the LG keyboard as the default. Most at SlashGear seem to prefer the Swype. The Revolution also has WiFi and Bluetooth Stereo 3.0.

The Revolution is running a 1.0 GHz Snapdragon processor with 2 GB internal memory and a factory installed 16 GB microSD card expandable up to 32 GB. The single core was probably a battery saving decision; perhaps LG took a lesson from the battery devouring ThunderBolt. However, some consumers will still be looking for the extra performance found in the new dual core phones on the market. With the Android world becoming optimized for dual core, the Snapdragon was a little disappointing.

The 4.3 inch 800 x 480 16.7M TFT display is excellent. It is definitely able to compete with the other hi-end displays on the smartphone market. Not as brilliant as the Samsung Super Amoled Plus display, but still an excellent touch screen. It delivered vivid, clean images while watching movie trailers, playing games, or streaming video. The screen is hard to see when outside in the sun, but hardly worth mentioning, since many other phones have the same issue. 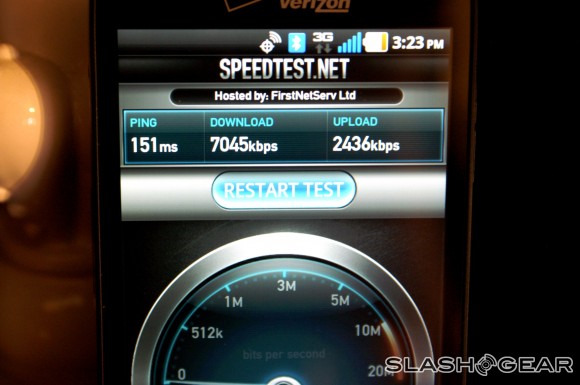 If you are looking for a fast network, then you have come to the right place. Speedtest.net clocked the Revolution download speed at 7.045 Mbps with upload at 2.417 Mbps, and ping at 151 ms. That is faster than lots of households get from their ISP. You just can’t get that speed on 3G. (3G is so last year). Almost instant downloading, and Netflix streams instantly as well. If you have to have the most extreme bandwidth, then LTE is where it’s at. It can also share its connection with up to 8 devices via 4G Mobile Hotspot.

The Revolution is being marketed as an entertainment phone, so naturally it came loaded up with lots of software that most people don’t want: VZ Navigator, V Cast Apps, Facebook, Blockbuster, Netflix, Rhapsody, Rock Band, Lets Golf 2, Yahoo Finance, Slacker, etc, etc. Most people would prefer to download the apps they want from the Market. On a side note, LG decided to go with Bing Search and Maps instead of the usual Google apps. We installed Google anyway. Both Google Maps and Bing functioned just fine. Revolution comes with SmartShare pre-installed, so it can control and share content with other DLNA devices right out of the box.

Now the next frustration: no video calling. Skype and the Verizon branded Skype still do not make mobile video calls. Even though the Revolution and the LTE network support video calling, there is no way to make video calls out of the box. The release of VoLTE (Voice over LTE) is still rumored to be late this year or early 2012, so we will all continue to wait impatiently. 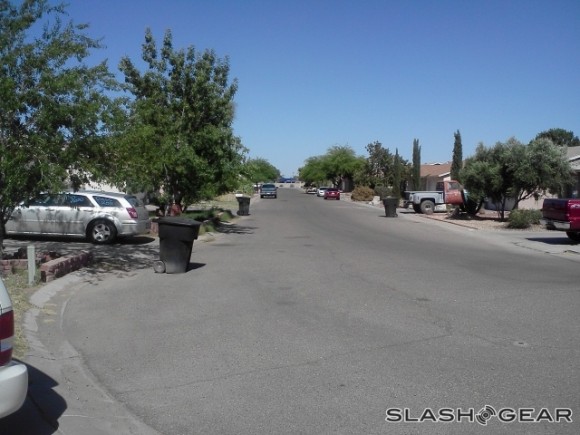 The 5 megapixel camera is a step down from the 8 megapixel on both the Droid Charge and the ThunderBolt. But it can still capture in 720p HD. The Revolution takes decent pictures and video, but we can’t recommend it over the Droid Charge. 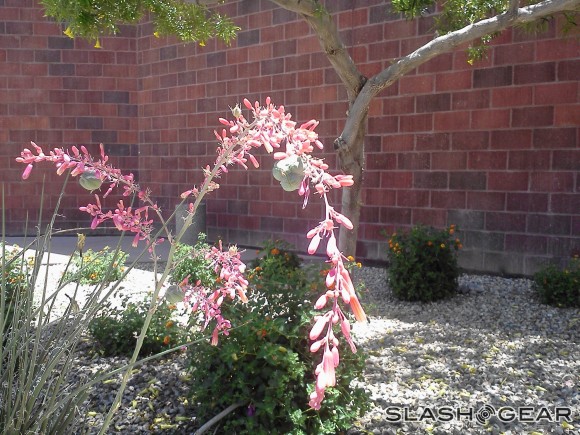 But there are some very cool features that come with the camera. Some of the more common features include Sepia, Mono, and Negative mode, along with zoom and flash settings. Some less common tools also come with the camera like crop, rotate, edit, adjust contrast, add text, and face morph. This allows some edit and touch up to photos on the go.

The call quality is excellent, even if it is not video calling. The speaker phone gets quite lispy at max volume, but that’s not a major issue. The only issue with calls has more to do with the phone design than the call itself. There is a slight ridge around the edge of the display. Unless the phone is held at the correct angle, that ridge can pinch or dig into the top of the ear. We didn’t notice until after we made a couple of longer calls. Some people hardly noticed while others couldn’t stand it. Probably a good idea to hold it to your ear and try it out for a few minutes in the store.

The battery life is what we were more interested in. LG lists up to 435 minutes of talk time and 335 hours of standby. In the SlashGear tests the revolution lasted 9 hours of frequent use before the battery indicator turned red. One charge should be able to make it through an entire work day. But be warned, there are some sure fire battery killers. After 3.5 continuous hours of non-stop internet radio and video, the battery was down to 13%. Mobile Hotspot will also drain the battery fairly quick. Overall we can definitely recommend the battery life of the Revolution over the ThunderBolt. The ThunderBolt ate batteries like a hungry hungry hippo.

But be warned, heavy use can still drain the battery on the Revolution (or any Android for that matter). And it still has some of last year’s Android inside: namely the single core processor, and Android Froyo. Even though LTE is on the cutting edge of speed, the processor and the OS make the Revolution a bit behind the times in those two areas. The Revolution is slightly limited in terms of future expandability when compared with some of the new dual core phones.

When discussing the Droid Charge, it is almost impossible to compete with the super bright, Super Amoled Plus display. There is also the Charge’s superior 8 megapixel camera. If someone wants to replace their camcorder with their smartphone, then the Droid Charge would probably be better than the Revolution. If someone is looking for a solid all-around phone on the fastest 4G network, we could recommend the Revolution, (but only after holding it against your ear in the store).