Not all foldable phones have a crease down the center of the display: some of them, like the LG G8X ThinQ and its LG Dual Screen accessory, have a hinge instead. The South Korean phone-maker’s second attempt at a twin-display Android smartphone is also its first try at the US market, with aggressive pricing and a cautious feature-set to test the waters.

Even in an era where no recent LG phone could really be described as “attention grabbing,” the LG G8X ThinQ takes bland to a new level. I can’t really complain that LG didn’t include the G8’s motion tracking sensor, because I quickly realized with that phone that it was frustrating and borderline-pointless. However in removing extraneous features LG clearly neglected to add anything eye-catching back in. 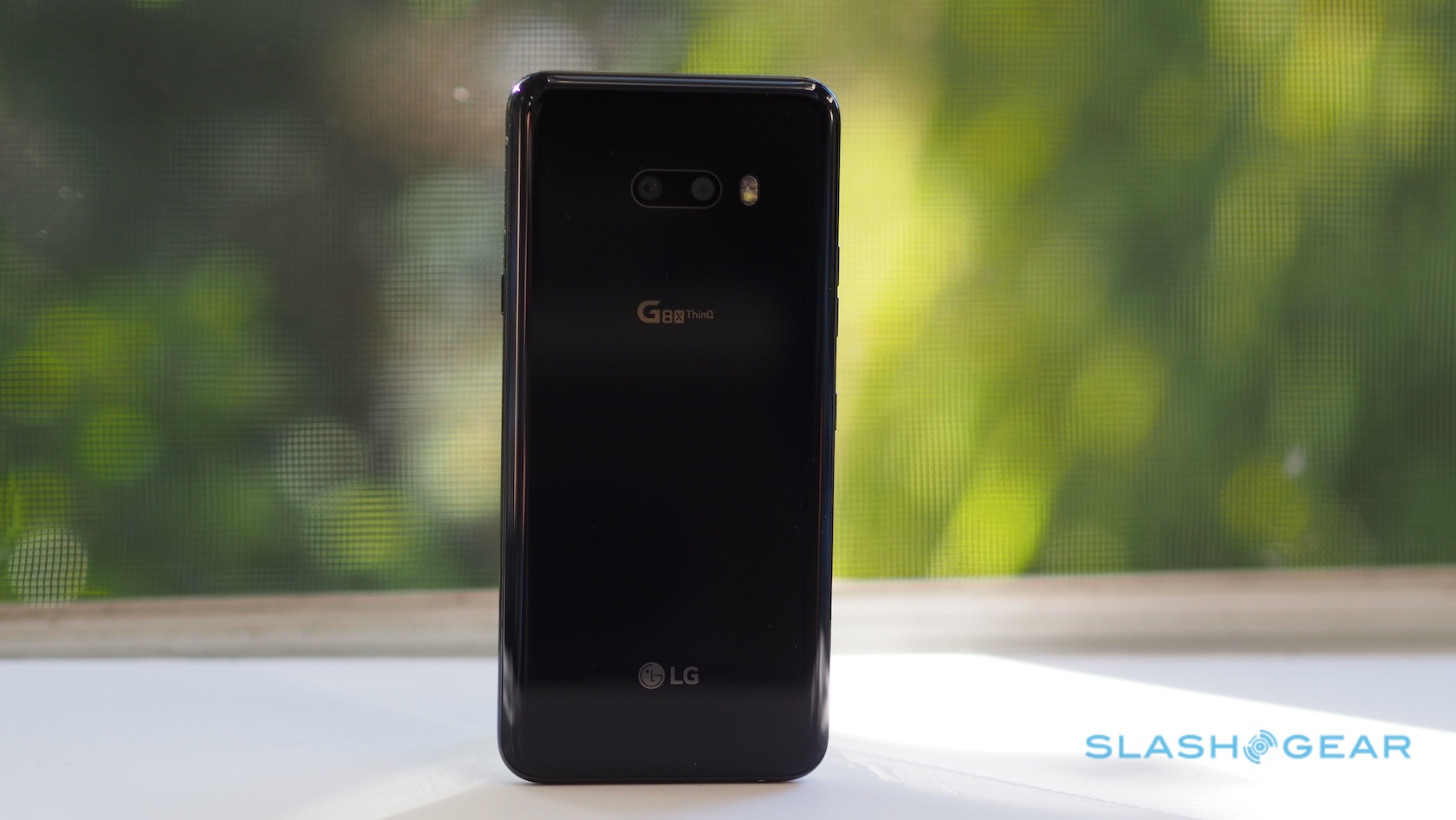 The result feels about as close to a 2019 smartphone reference design as you can imagine. A 6.4-inch 2340 x 1080 OLED display on the front, a Qualcomm Snapdragon 855 chipset inside, and both 6GB of memory and 128GB of storage. I’ll give LG credit: it keeps on offering both a microSD slot and a 3.5mm headphone jack, despite both being increasingly rare features in the segment.

With no oversized G8 notch on the front, there’s a small teardrop cut-out for the 32-megapixel selfie camera. That produces 8-megapixel shots by default, combining clusters of four pixels into 1 in the final image for more accurate photos. On the back, the fingerprint and smudge-hungry gloss black casing gets a 12-megapixel standard camera (f/1.8 with OIS and a 78-degree field of view) and a 13-megapixel super-wide camera (f/2.4 with a 136-degree field of view). 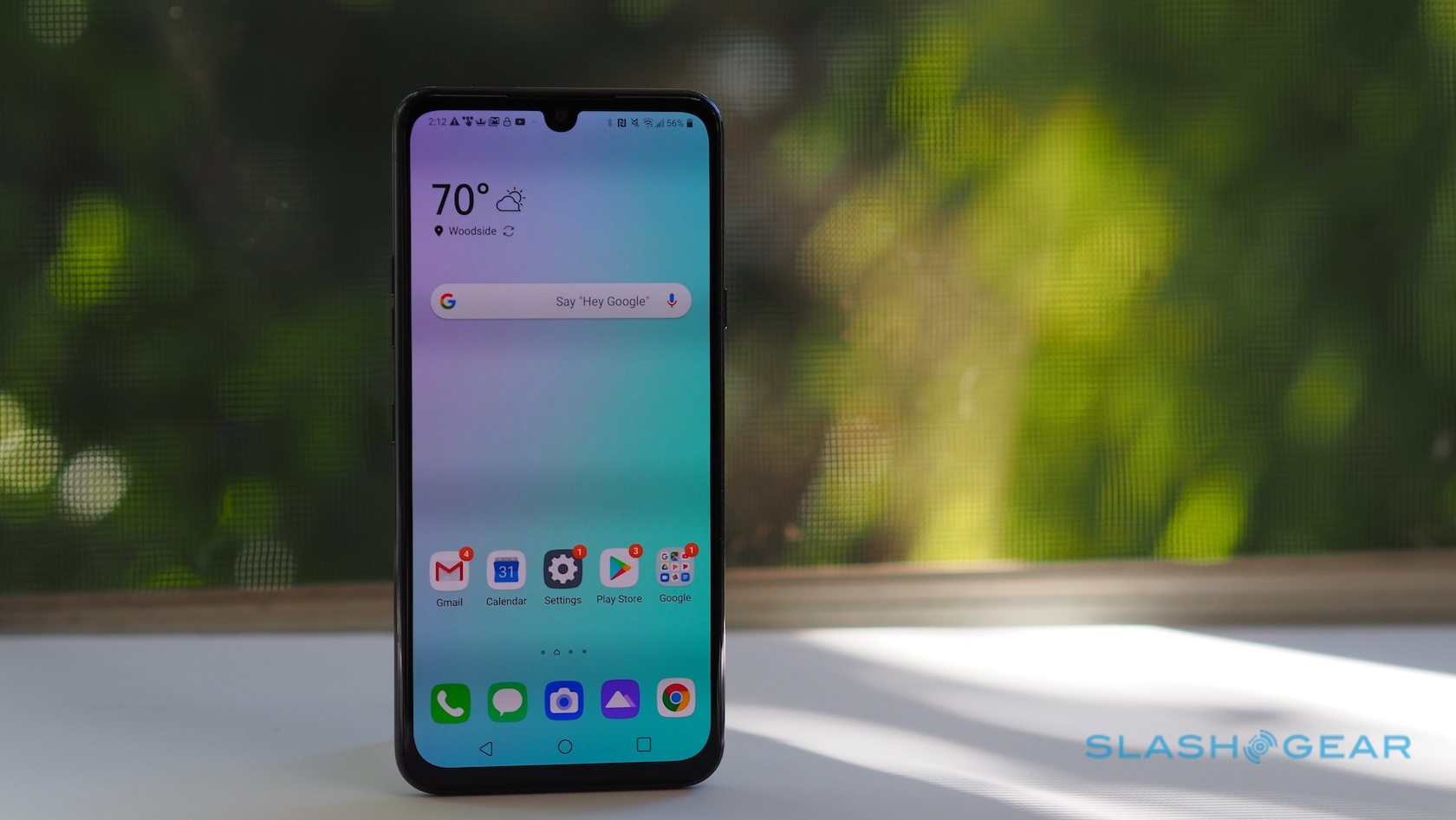 The optical fingerprint sensor is integrated into the screen, recognizing my fingers at an mildly-frustrating average speed and success rate, and the whole thing is IP68 and MIL-STD 810G compliant. Just about the only two standout features come down to audio and battery. 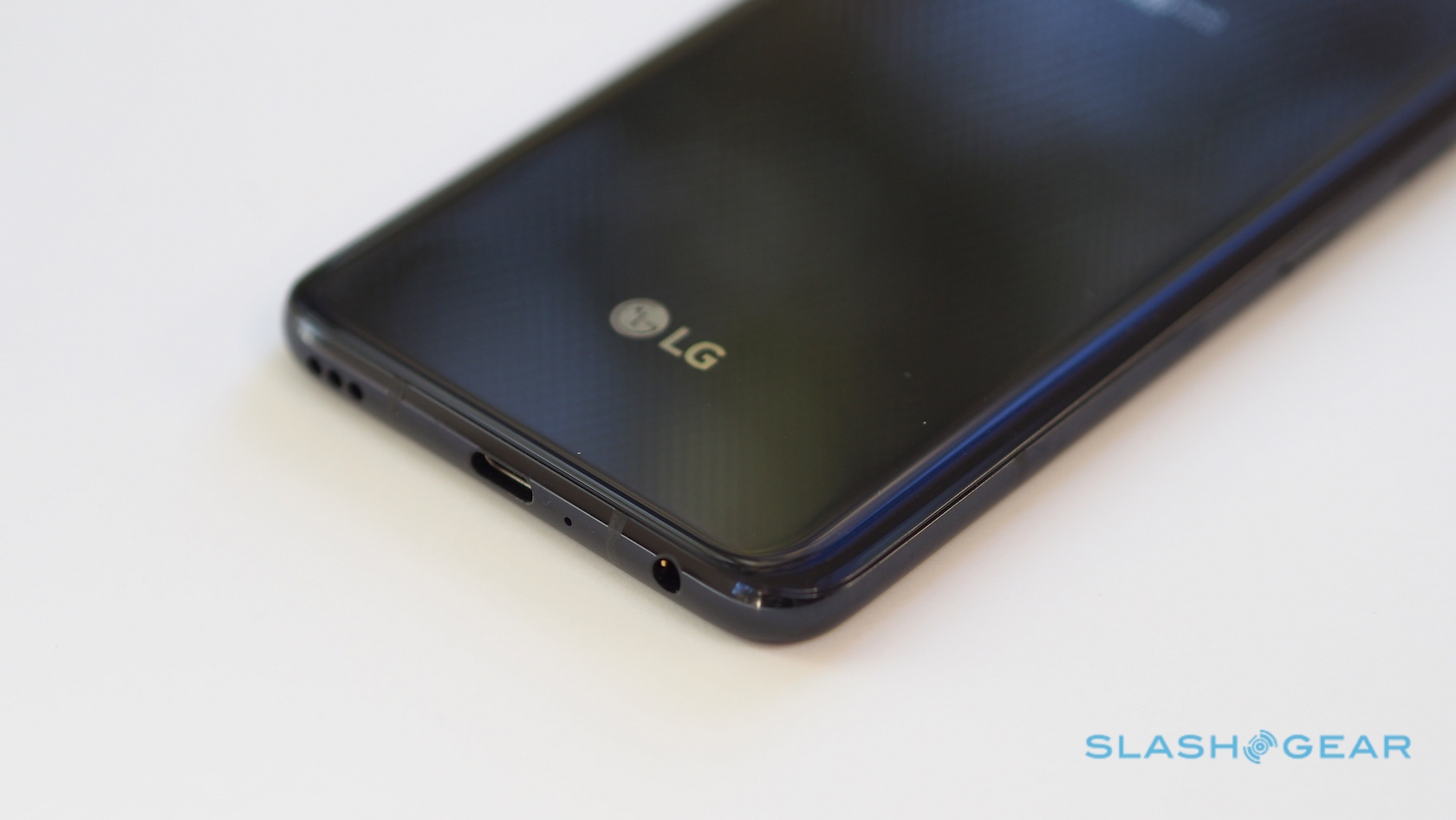 As with a regular headphone jack, LG has also persevered with its 32-bit Hi-Fi Quad DAC audio system. Honestly, I made the jump to wireless headphones a while back, but plugging in a set of decent wired headphones made me wonder if I’d been a little hasty. The G8X sounds great – if you feed it with the requisite higher-res audio files, of course – and it even keeps that up through the 2.4W stereo speakers. They’re now better balanced for equal sound levels from the left and right channels, a subtle difference you mainly notice when you go back to other phones and realize they sound, well, unbalanced. 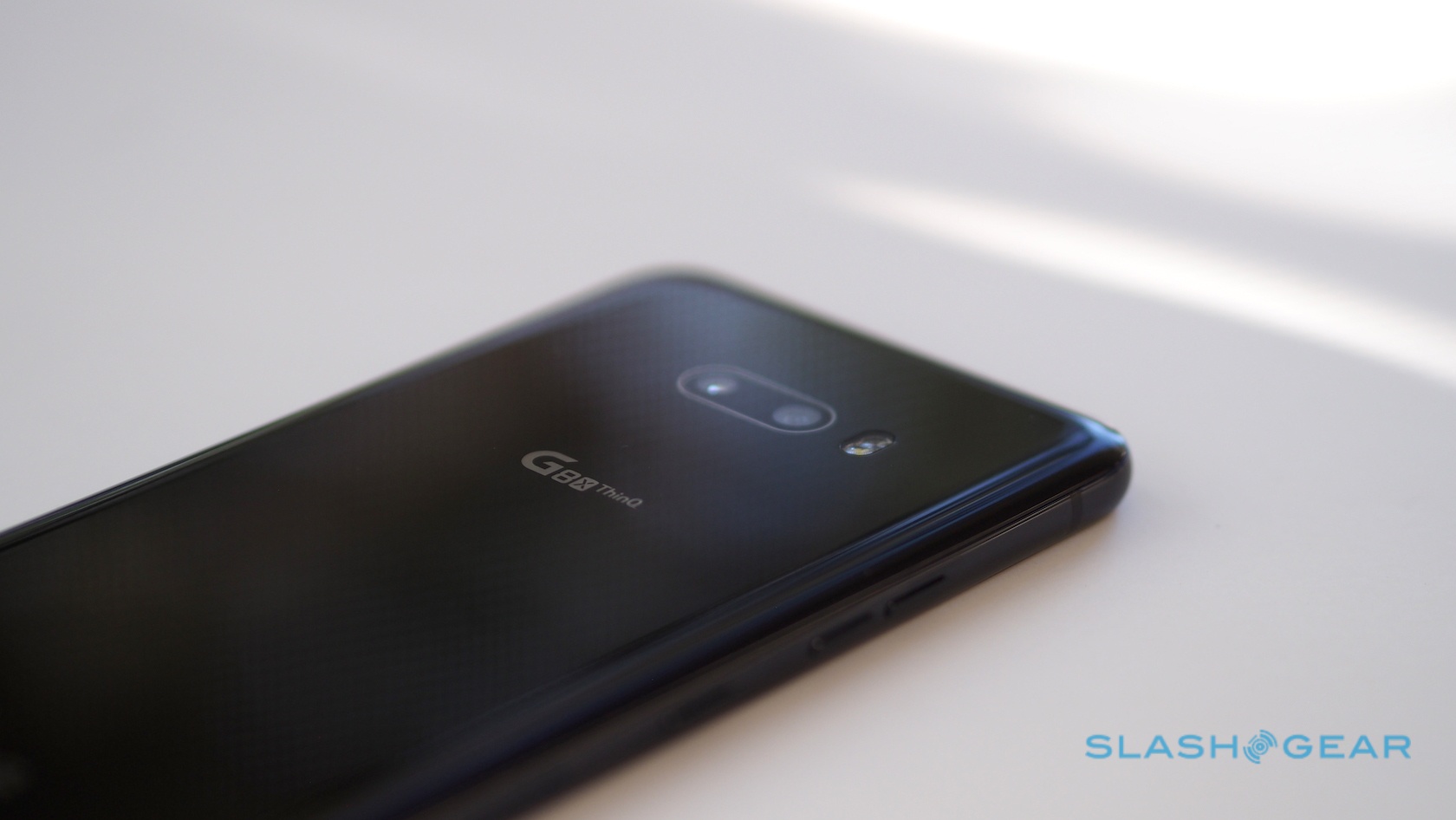 Then there’s power. LG fits a 4,000 mAh battery, which is large even by today’s standards. There’s Quick Charge 4.0 for USB-C chargers, and wireless charging support too. I had no problems getting through a full day with juice to spare; it even left me wishing there was a reverse-wireless charging option to share some of that power with Qi-compatible accessories.

Foldable, but a different type of foldable

Honestly, $700 for the LG G8X ThinQ on its own would be fairly aggressive pricing. I’d still probably recommend most people look to the OnePlus 7T, but the LG’s cameras are just as capable of great images as other smartphones it has offered this year, the display is crisp and colorful, and Android 9 Pie runs as smoothly as you’d expect given the hardware it has to play with. 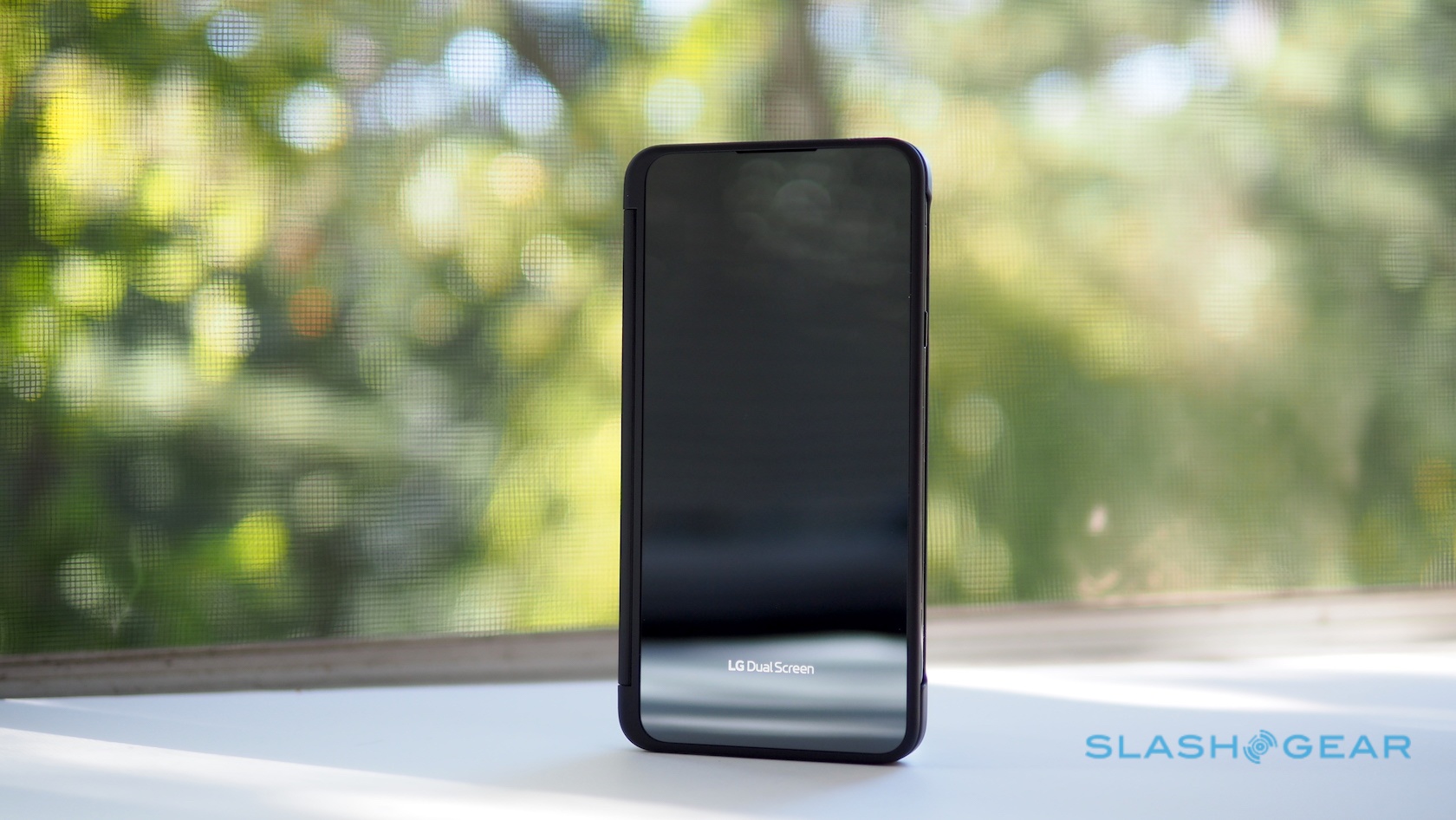 LG, though, isn’t selling the G8X on its own, and nor are its carrier partners: initially AT&T and Sprint, with an Amazon version coming soon. Instead it’s bundling the phone with the LG Dual Screen accessory. That decision, LG execs say, was borne out from watching the reaction to the V50 ThinQ, the first of its handsets to support a Dual Screen add-on.

In South Korea, where that phone launched earlier this year, users tended to go through a honeymoon period with the Dual Screen accessory. First they’d use it a lot. Then, perhaps because of the bulk it added, they’d relegate it to a drawer. Over time, though, many owners went back to retrieve it. That’s an arc, LG points out, that can only happen if everyone has the Dual Screen to experiment with. 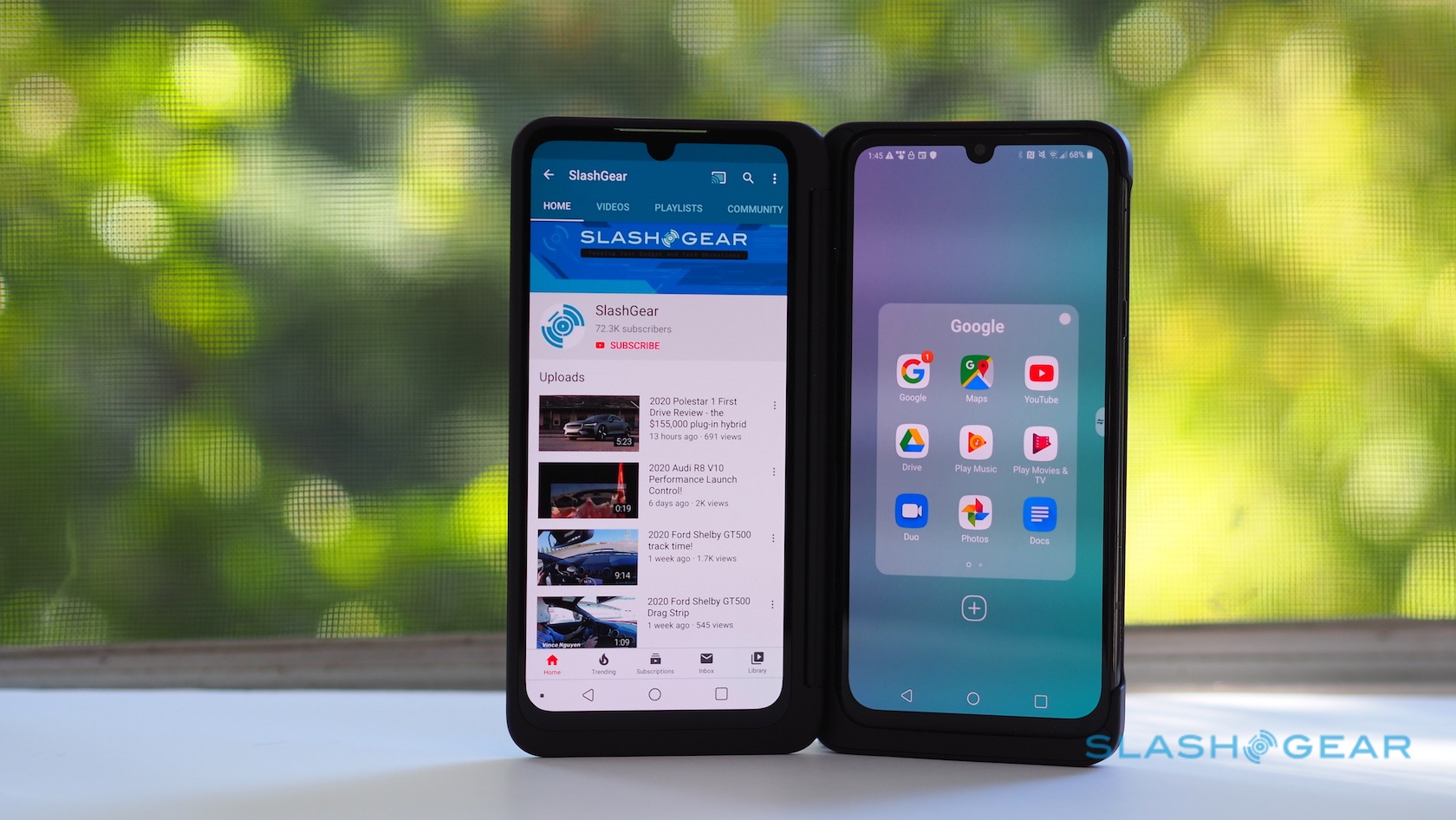 So, in the US every LG G8X ThinQ owner will get the LG Dual Screen too. It’s a folio case into which the smartphone slides, connecting via a USB-C plug at the bottom. On the outside, there’s a 2.1-inch mono status display, which shows the time and date, battery level, and previews notifications. It’s small, and you can’t interact with it, but it’s useful nonetheless.

Open it up, and there’s a matching 6.4-inch 2340 x 1080 OLED screen alongside the phone’s display. They really do match: LG uses exactly the same panel, which means the Dual Screen has a teardrop at the top, even though it doesn’t accommodate a selfie camera. The first-gen Dual Screen used a different panel from the V50, LG explains, which meant matching things like color temperature and brightness was tricky. By using the exact same OLED panel for this updated version, that problem is avoided altogether. It also, execs concede, makes sense from an economy-of-scale standpoint. 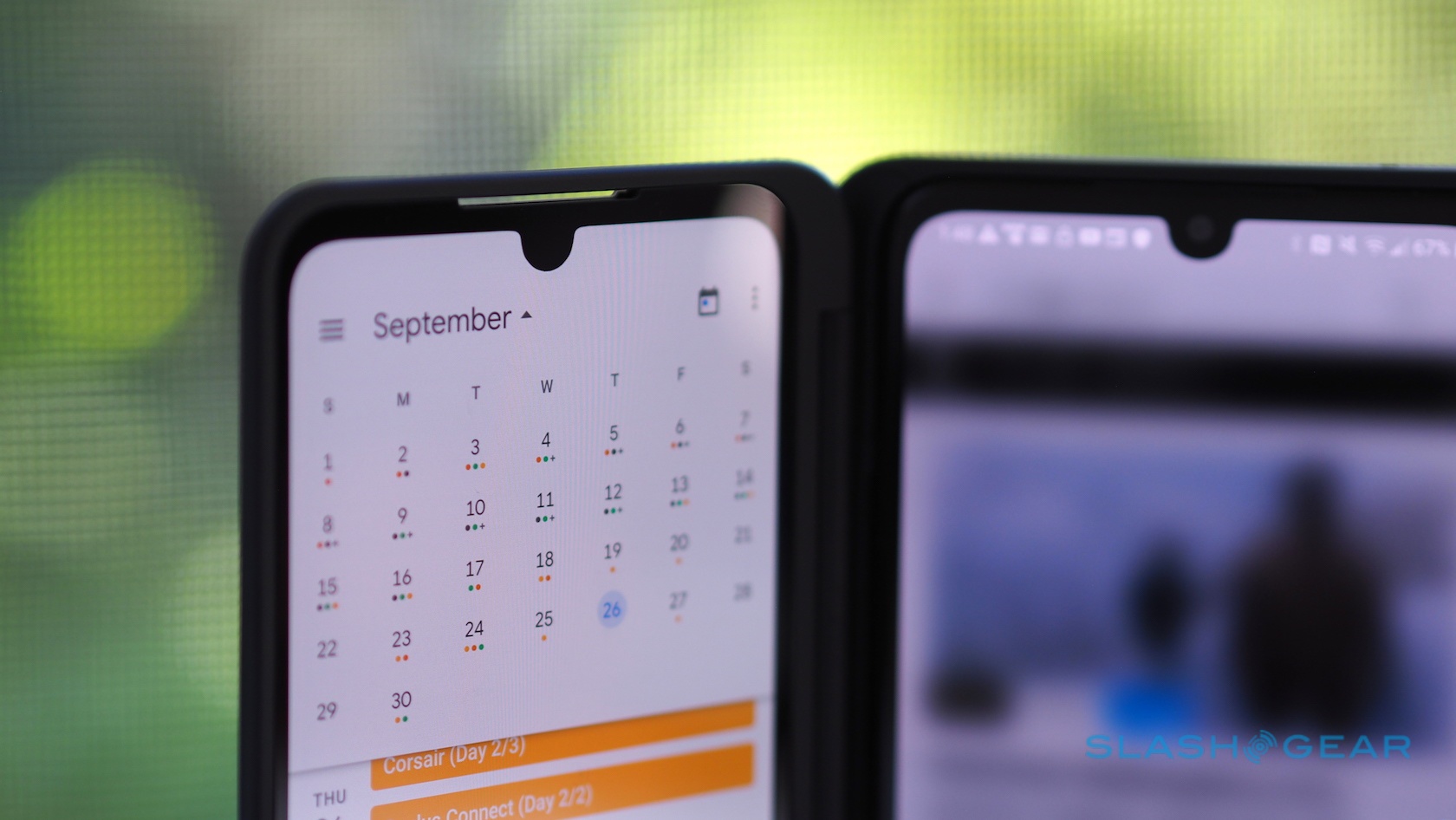 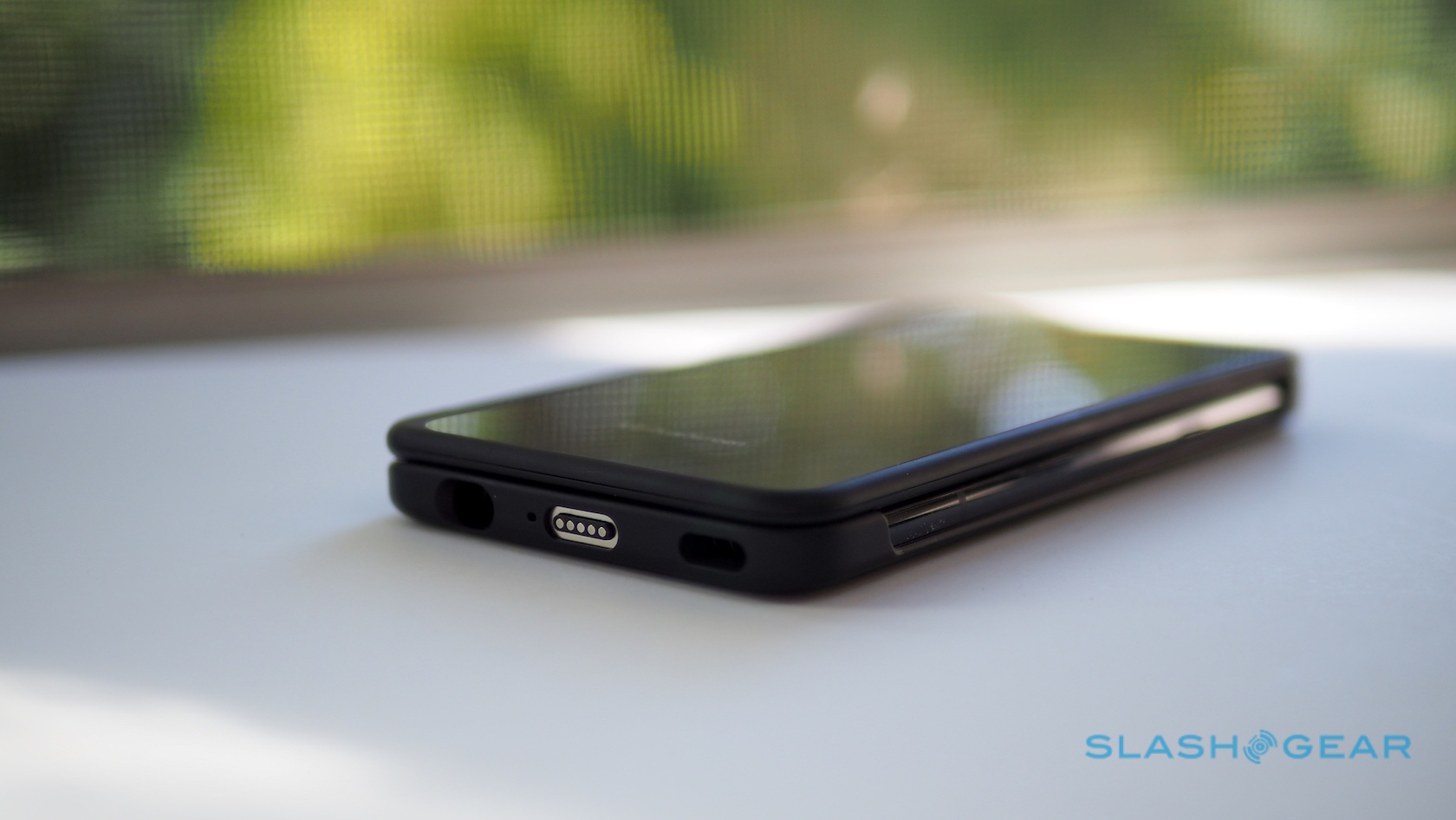 LG does its best to make the whole thing still ergonomically useable, but there’s no denying this takes up a big chunk of your pocket. You can, at least, answer calls without opening the screen: pressing the dedicated Google Assistant button accepts the call, and there’s a slot which the G8X’s earpiece can be heard through. Wireless charging works, too, which is useful because you don’t get a pass-through USB-C port. Instead, LG uses a proprietary USB-C to pogo-pin adapter which attaches magnetically to the bottom of the case. 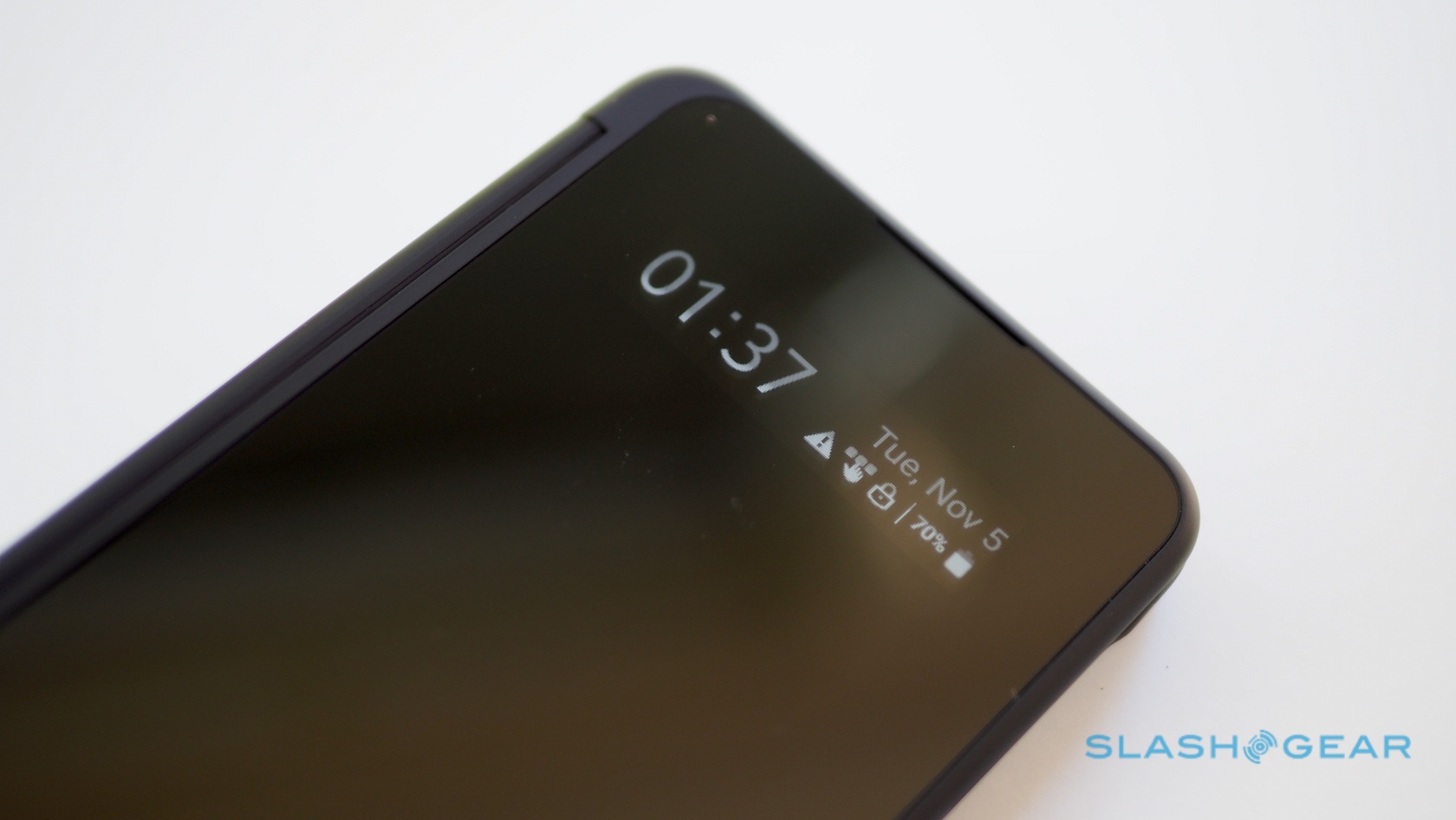 There are, it has to be said, some ergonomic advantages too. With its 360-degree hinge, you can use the Dual Screen case to stand the phone up in lieu of a tripod for photos, or to watch videos more comfortably. It feels sturdy, too, and while the black plastic isn’t exactly a tactile joy, I suspect it would keep the phone safe if you inadvertently dropped it.

The Dual Screen is reliant on the G8X for power, with no battery of its own. Probably wise, considering that would only add more weight and bulk. But even leaving it attached all day, and using both screens, the LG’s 4,000 mAh battery kept things going through to an overnight charge. 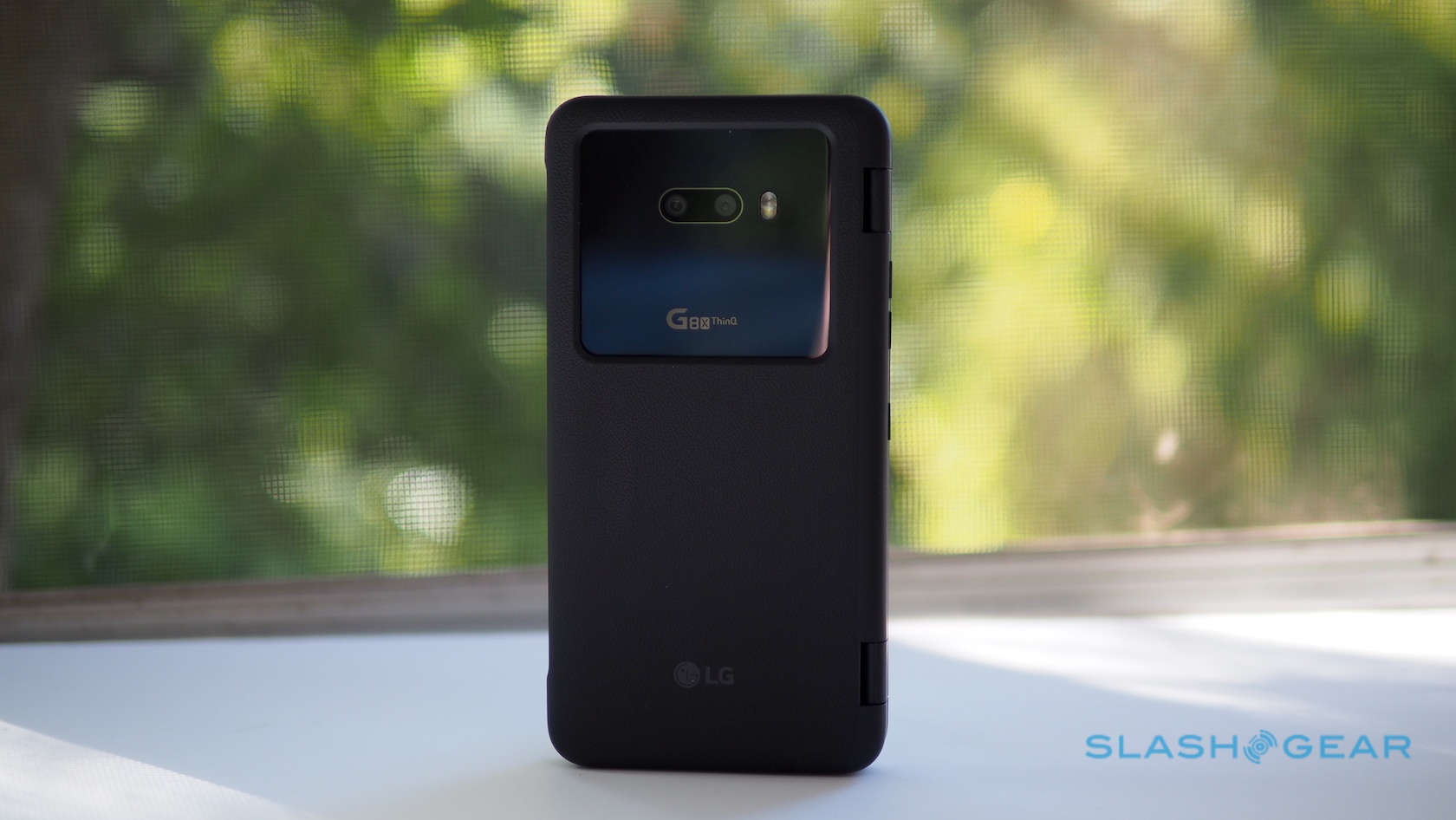 How useful is the LG Dual Screen?

So it lasts, but is it worth using? While the combination of the G8X and the Dual Screen is certainly foldable, it’s a different interpretation of the idea to, say, Samsung’s Galaxy Fold (not to mention far, far cheaper). Whereas a folding OLED panel makes a single, larger screen from some sort of clamshell device, LG’s twin panels are resolutely separate.

The focus, then, is on multitasking rather than just having more real-estate. Just like having two displays plugged into your PC and running separate software on each, the Dual Display means you can have two full-screen Android apps visible at once. There’s none of the occasional layout weirdness you sometimes encounter on a Galaxy Fold, where an app struggles with the non-traditional aspect ratio. 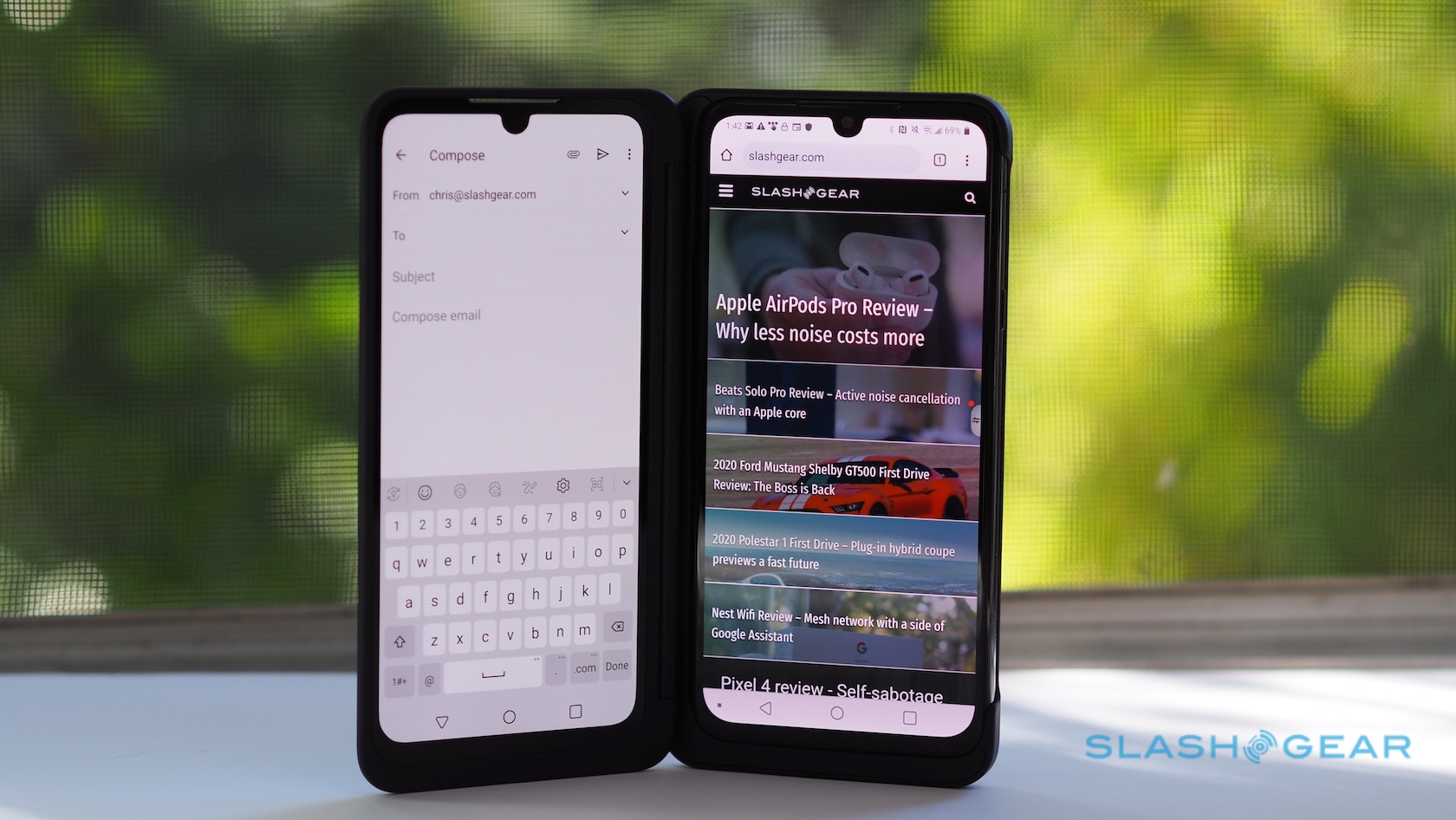 Requiring app-makers to develop custom versions to suit unique hardware is something we’ve seen sweep the legs out from under many a project in the past. Instead, LG has tried to do as little modification of Android as possible; it’s also hoping that Android 10, which has been designed with foldable and multiple screens in mind, will allow it to jettison some of the customizations Android 9 Pie has required. 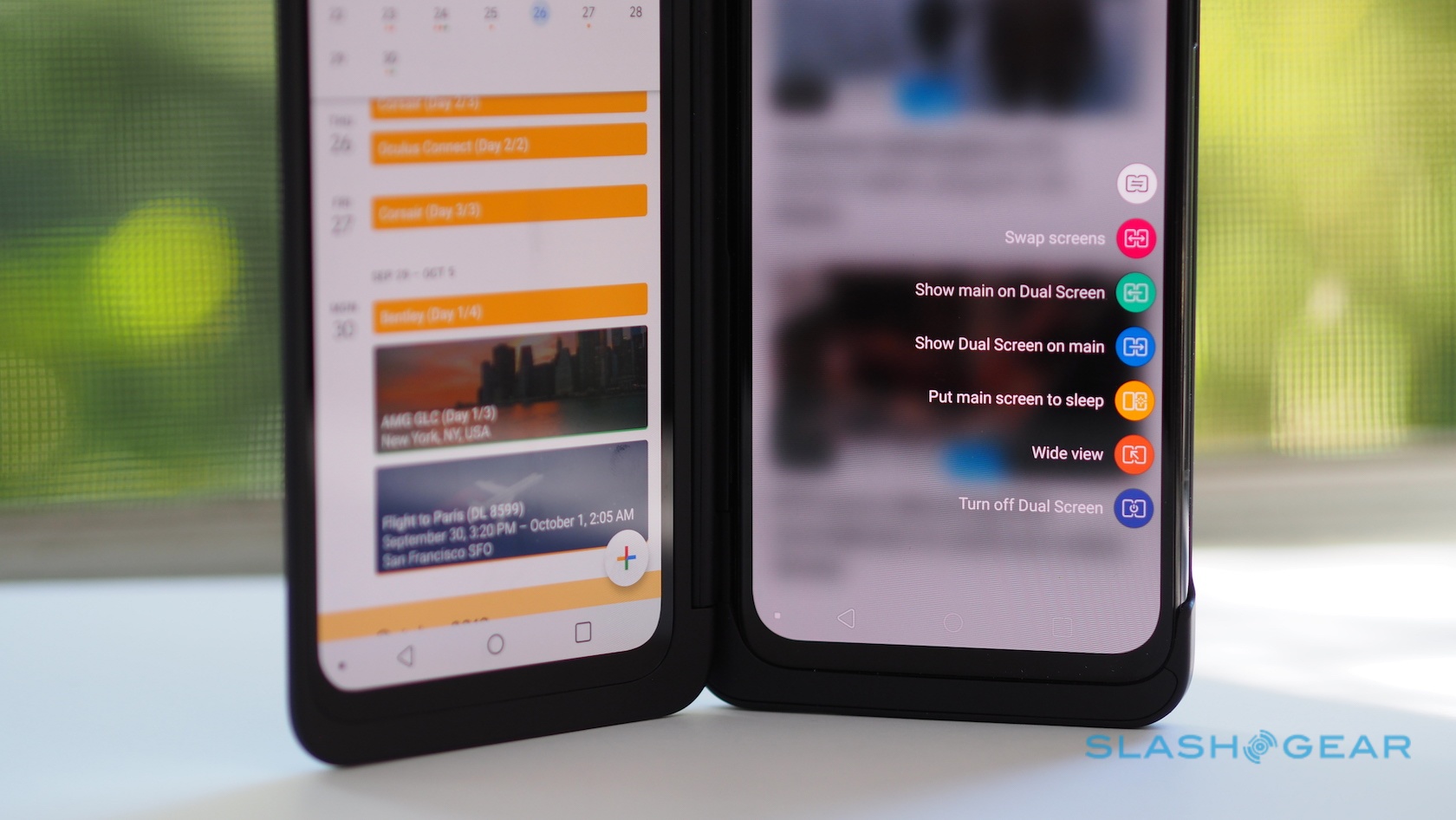 There’s a floating dual-screen menu which allows you to swap the screens around, show what’s on the main screen on the Dual Screen instead and vice-versa, and put either screen to sleep. A three-finger swipe to the side flips the current app to the opposite screen, too, and there’s a new icon on LG’s customized keyboard that captures a screenshot of the Dual Screen (the regular Android screenshot button-press works for the main screen).

It’s actually surprisingly useful at time to have two displays. I’m not quite sure I could leave my laptop at home for a trip, like LG suggests would be possible, but seeing both my email and a webpage or calendar simultaneously saves a lot of jumping around. Having YouTube on one screen while browsing on another is also handy. 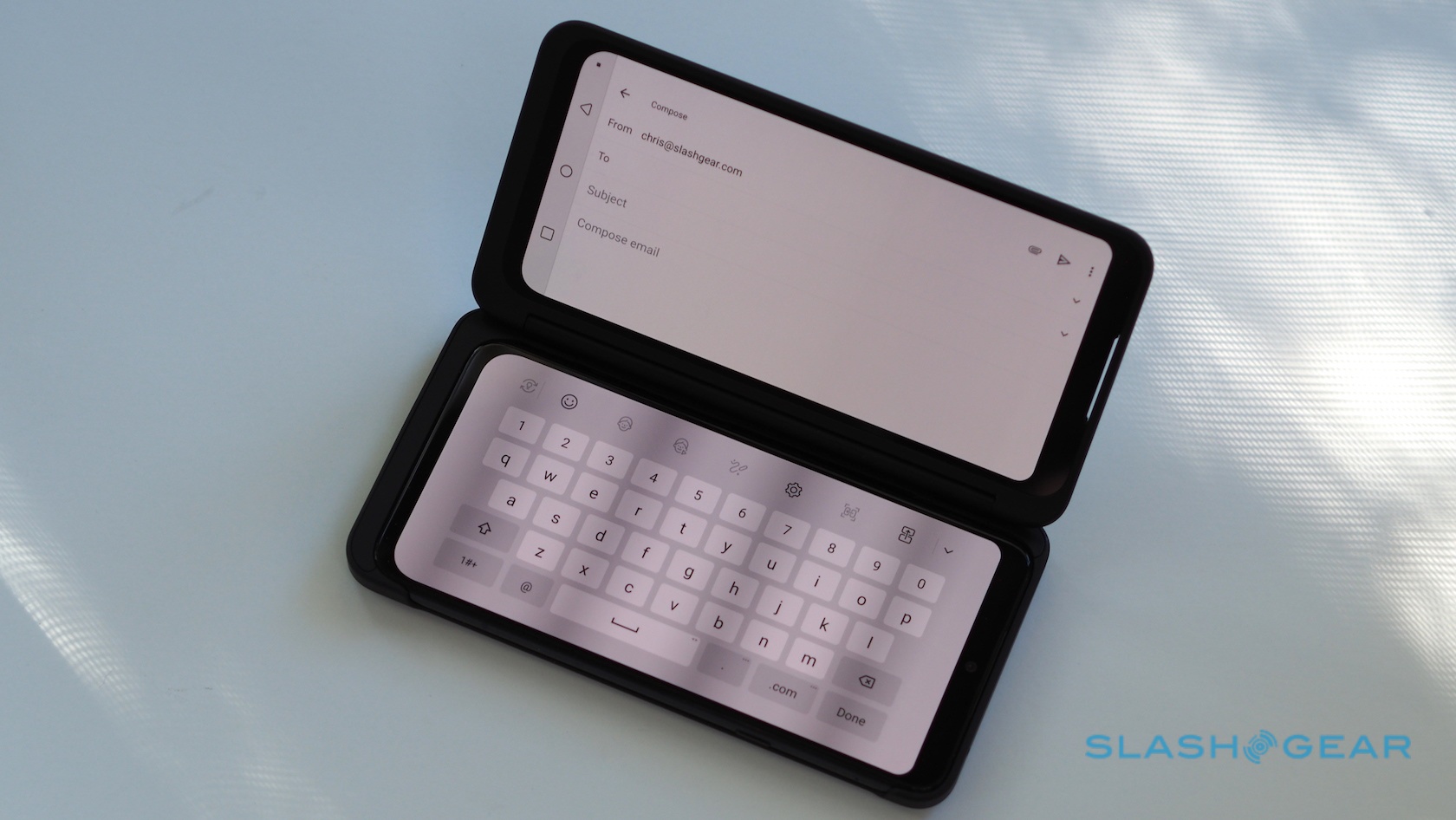 Interacting with them can be finicky. LG’s keyboard has been customized to support split-screen typing: you turn the phone around and hold it like a mini-laptop, the app you’re using on the upper screen and the keyboard taking up the lower panel. Third-party keyboards, though, don’t do that. I also ran into a problem with apps not designed for landscape orientation, like Instagram. There, you can’t load the split-screen keyboard at all, and so use a regular keyboard on one of the displays. That usually requires folding the Dual Screen around otherwise the hand ergonomics are messy.

It’s not the only challenge. Right now, aside from Chrome, you can’t run two versions of the same app at once. If you were hoping to go Pokemon hunting with two Pokemon Go accounts simultaneously, think again. Even just managing things like the Android home screen can be frustrating, since you can’t drag shortcuts from one side to the other. LG treats them as two distinct home screens. 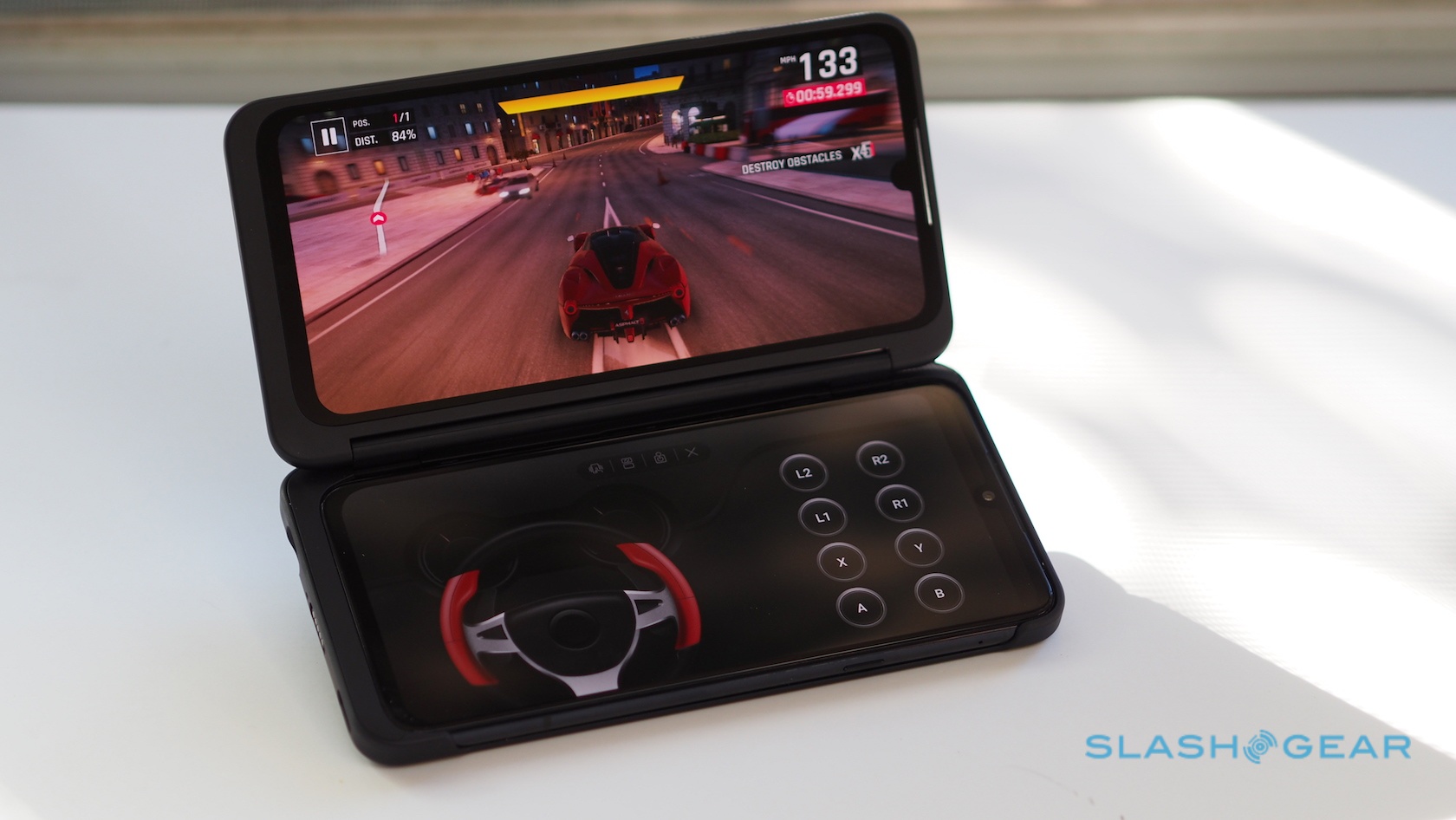 On balance, I think I prefer this light-touch approach from LG compared to the alternative: a heavily-customized version of Android that we’d need to rely on the company updating and maintaining down the line. Where it has developed custom apps, like the G8X’s gaming controller that allows you to create your own custom layouts (and soon to share them) mapping virtual buttons to any point on a game’s interface, it highlights the Dual Screen’s potential well.

Foldable devices are still in their infancy, and that’s a combination of both the current state of hardware and software. LG, for its part, says that it’s still excited about “true” foldables – phones with displays that actually bend – but, having seen the challenges Samsung faced this year, I can’t blame the company for taking baby steps. 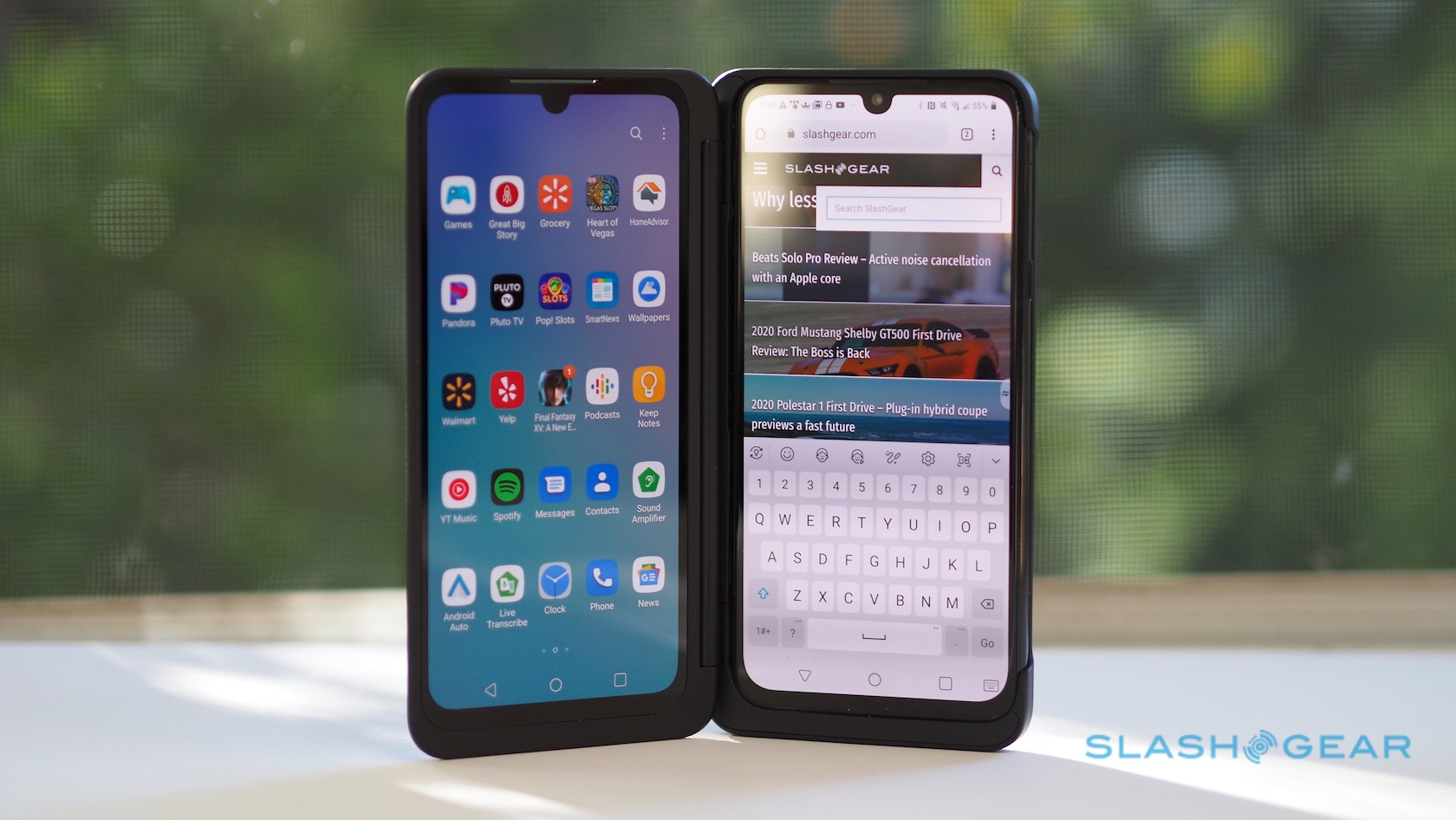 That’s not to say I don’t see a place for twin-screen devices, such as the G8X. Having more display real-estate can be incredibly useful, as is the ability to leave that behind and just carry a slim, regular Android phone. Were the Dual Display sold separately I’m not sure I could justify telling you to buy it, but LG’s decision to bundle both halves together makes a very different story.

For most people, this is still beyond the realm of what’s needed. I can’t help but think that Android 10 may shake things up in unforeseen ways too. Right now, LG’s experience varies considerably across different apps, a regular reminder that you’re at the bleeding edge. That doesn’t make the LG G8X ThinQ a bad phone, though, just a niche one, but at least unlike some foldables the cost of entry is impressively low. 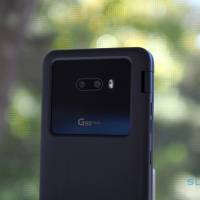 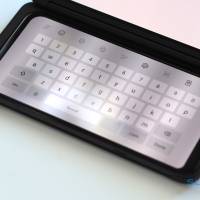 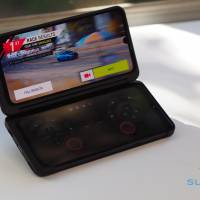 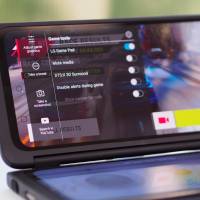 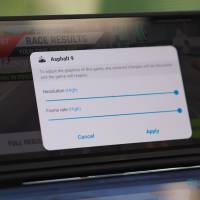