LG has practically leaked every aspect of the LG G6 except for its actual appearance. Others, however, are more than happy to provide those pieces of the puzzle. So far, we have indeed seen some inkling of the design and appearance of the LG G6, but mostly in renders. This latest leak shows what is allegedly a real model, or maybe a dummy. But for added perspective, it is shown side-by-side the LG G5, which gives us a better idea of LG’s “FullVision” display.

One of the LG G6’s key features is its screen. Or to be more precise, how it is offering a larger screen without actually making the smartphone larger. The reason for this is that, according to its user feedback, is that people want larger screens but still want to be able to easily hold the phone, even with one hand.

The solution here is one that is already probably familiar to those following the smartphone industry: shrink the bezels. This is more evident with the G5 and G6 together where we can see exactly how that translates into practice. The LG G5 had a 5.3-inch display while the LG G6 is going to have a 5.7 inch screen. If you look at absolute dimensions, that might not be a lot, but that’s because screen sizes are measured diagonally rather than from the sides. 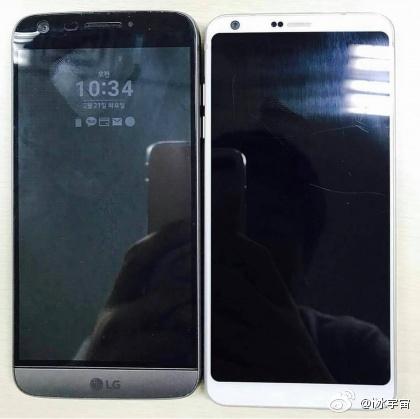 The photo above clearly shows that the G6 on the right does have a larger screen. At the same time, however, the actual size of the G6 itself is no larger than the G5 and may, in fact, be on the shorter side. The top and bottom bezels are noticeably thinner but there’s still some bezels on the side. Unlike Samsung, LG isn’t such a strong believer in curved side edges.

One peculair thing about the LG G6’s screen is that its corners are rounded. Most of the time, it’s the smartphone’s frame that is curved at the corners while the screen is a straight rectangle. Whether that new form will present issues with content, most of which are designed for rectangular screens, is something we’ll have to wait for to see.

The LG G6’s FullVision display will come in a 5.7-inch “QHD+” panel, which is LG’s shorthand for a 2880×1440 pixels, or its new 18:9 ratio. That ratio is instrumental in enabling features like having two squares on top of each other like in the camera app.