Lexus is at the Pebble Beach Concours d’Elegance and is showing off a pair of concept cars that appear to be close to production form if not production ready. Lexus says that both cars are meant to show two different takes on the future of luxury. The two concepts are the LC Inspiration Series Concept and the UX 250h Concept.

The Inspiration Series car is Flare Yellow on the outside and has unique black forged 21″ wheels. The concept has a carbon fiber roof and an active rear spoiler. Inside the car, the interior has yellow door inserts made of Alcantara that are of the same yellow as the outside of the car.

Lexus fits the car with touring seats with semi-aniline leather with yellow stitching. The same yellow stitching is on the instrument panel, console, and glove box. Power is from the standard 471hp 5.0L V8 engine and 10-speed automatic transmission. Lexus promises a 0-60mph time of 4.4 seconds and up to 25 mpg on the highway. Production timing is under consideration will be announced later.

The Lexus UX 250h at the event is a compact crossover and this version was built by Clark Ishihara of VIP Auto Salon. On the outside, the ride is covered in an Oracal vehicle wrap with a custom roof rack for holding a special bike. That bike is the Lexus F SPORT Carbon Fiber Road Bicycle. 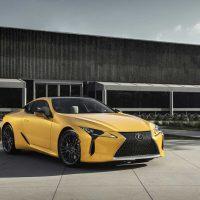 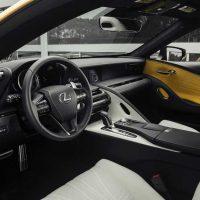 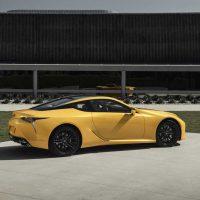 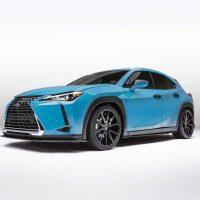 It has an NIA Auto Design ABS Lip Kit, Vossen VFS-1 wheels and Nitto Invo tires. The car is also fitted with an Apexi N1 EXV damper suspension, full catback exhaust, and an Inno Base Rack for hauling that bike.