Lexus design concepts imagine how we’ll travel on the moon

Much of the focus on lunar space travel is spent on getting to the moon because, of course, we need to get there and establish a base first before anything else. But once we’ve settled down, how are we going to get around our new lunar home? That’s the question that Lexus has sought to answer with a set of concept design sketches that are figuratively and literally out of this world. Some of them we’d probably wished wasn’t so out of reach.

Art and fashion magazine Design Journal invited luxury car marque Lexus and other architects and designers to imagine human transportation on the Moon. Not just the rugged metal beasts that will most likely be used by lunar pioneers but fashionable and even luxurious vehicles for both recreation and study. Lexus’ designers came up with seven such designs and, of course, they didn’t miss the opportunity to insert some iconic Lexus design element, particularly its spindle.

Of the seven, the Zero Gravity was chosen to be featured in the print version of the Design Journal’s 15th issue. Calling it a bike would probably be a bit of a misnomer as it has neither wheels or traditional handlebars like bikes on earth. Instead, it utilizes the Magnetic Levitation of the future as well as the concept of a single rein to steer.

Other lunar vehicle concepts range from classy to sporty to geeky. The Lexus Cosmos above and Lexus Lunar Mission, both flying vehicles, use clear glass and liquid side body, respectively, to let passengers see the lunar world around them or reflect the stars in space. The Lexus Moon Racer is exactly what it sounds, turning driving on the moon into a new kind of sport, while the Bouncing Moon Roller makes getting around more fun or nauseating or both. Finally, the Lexus Lunar Cruiser converts from rolling vehicle to a flying one for ease of exploration while the massive Lexus Lunar is home on six wheels. 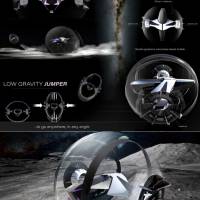 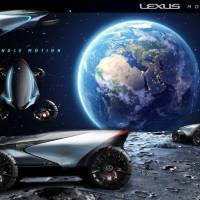 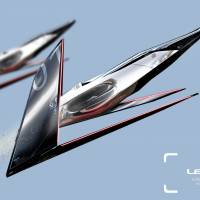 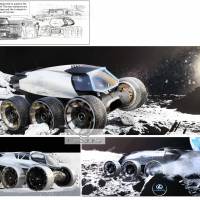 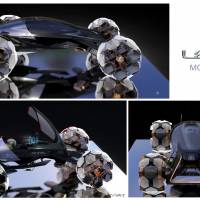 Of course, these are just concepts that will require non-existent technology to become reality. They could, however, serve as the basis to inspire the next generation of designers and engineers when making lunar vehicles. Provided we actually get to set up camp there first.