A few details of the Lenovo ThinkPad X3 ultrabook have leaked online. The machine is said to be the successor to the X1 Carbon that Lenovo unveiled last year. The ThinkPad X3 gets new fourth generation Intel Core i3-i7 processors of the 15W ULT variety. The new ultrabook will be even thinner than the X1 Carbon we reviewed in August of 2012.

The leaked specification show the X3 will be 331 x 226 x 17.2 mm thick for non-touch versions and 18.76 mm thick for touch equipped versions. That makes the machine approximately 2 mm thinner than its predecessor. The X3 will weigh 1.27 kg and features Intel vPro technology. The ultrabook can be fitted with 4 GB to 8 GB of RAM with a single DIMM. 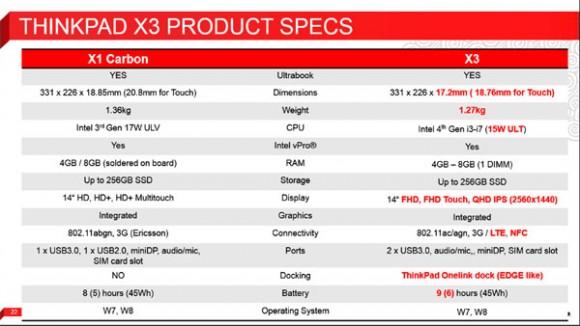 Storage is up to 256 GB via a SSD. The X3 will have several 14-inch screen options including FHD, FHD Touch, and QHD IPS. The QHD IPS screen has a native resolution of 2560 x 1440. The X3 will use integrated graphics and will have built-in Wi-Fi, LTE, and NFC technology. The machine also have a pair of USB 3.0 ports.

The X3 will also be able to dock with the ThinkPad Onelink dock and will feature a battery good for up to nine hours of use. The ultrabook will also feature a new hinge design for the screen allowing it to lay completely flat and a five-button touchpad. Pricing and availability details are unknown at this time.