This upcoming holiday season, Lenovo hopes you’ll grab one of its sleek YOGA Tablet 3 Series slates: the YOGA Tab with an 8-inch or 10-inch display, or the more sophisticated YOGA Tab 3 Pro, which features a 10-inch display as well, but more robust features. All three feature the unique fold-in kickstand-like design we saw earlier this year from Lenovo, and the Pro version takes things even farther with a built-in projector and 3D audio.

First up is the smallest of the bunch, the Lenovo YOGA Tab 3 8-inch model. This features an 8-inch HD 800 x 1200 IPS display, Qualcomm quad-core 1.3GHz processor, 1GB of RAM, and Android 5.1 Lollipop. The system has an SD card slot which supports cards up to 128GB in capacity, as well as an 8MP rotatable camera with auto focus.

A pair of front-facing speakers with large chambers are joined by Dolby Atmos 3D Surround Sound. Other features include optional 4G LTE (depending on country), Bluetooth 4.0, and Lenovo AnyPen technology.
The tablet’s biggest bragging point is likely its 20 hour battery life.

Very similar is the YOGA Tab 3 10, which features a larger 1280 x 800 10-inch IPS display. The specs are mostly the same otherwise, but the battery life is slightly diminished at 18 hours on a charge rather than 20 hours. This tablet starts at $199 USD for the WiFi model, and $249 USD for the LTE model. 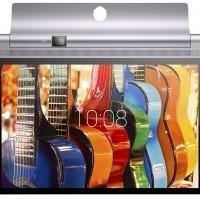 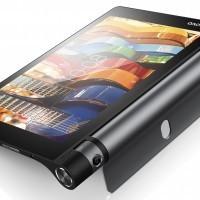 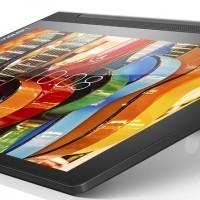 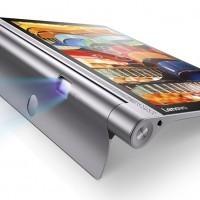