Leaning forward, trying to put my weight on my left leg, I gingerly tap one of a small cluster of buttons on the crutch helping support me. With a faint electric whine, my right leg snaps up and then forward. I’ve just taken a step with Hyundai’s H-MEX and, while I’m lucky enough to have no issues walking on my own, this “Medical Exoskeleton” could represent a whole new world of mobility for those currently confined to wheelchairs.

Hyundai as a company is fairly obsessed right now with figuring out how mobility will evolve over the next couple of decades. It may be best known for cars, but they’re only one part of an overall transportation ecosystem that the South Korean company wants to be a part of. That’s why, as well as taking me for a spin in its latest, road-legal (on certain roads, anyway) self-driving car prototype, it also strapped me into the H-MEX. 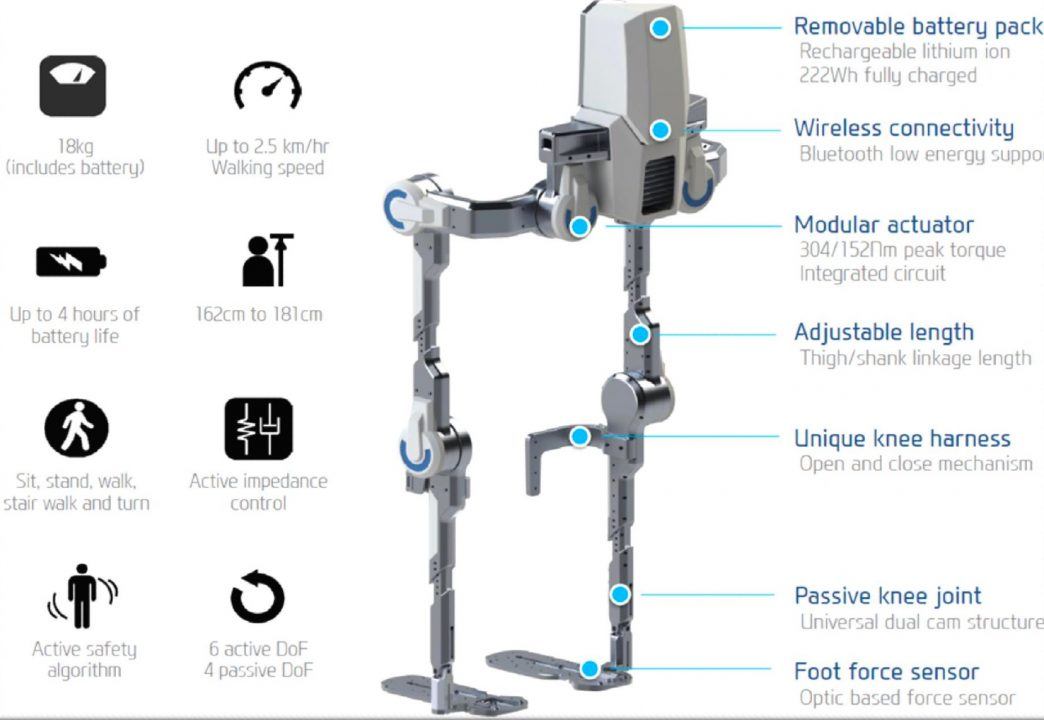 While the two couldn’t seem more different at the outset, there’s actually plenty of overlap between making a vehicle – particularly a self-driving one – and making a robot, Hyundai says. In the case of the Ioniq Autonomous Concept, the robotics are responsible for controlling the wheels and pedals, but also combining input from multiple sensors to figure out how best to navigate an evolving road network. In H-MEX’s case, the sensors are more focused.

If you’re expecting to look like Ellen Ripley, strapped into the wasp-yellow confines of the Power Loader in Aliens, the reality is a little different. A group from Hyundai’s Human Factors & Devices Research Team at the Central Advanced Research Facility in Korea – including Tae Won Lim, senior Vice President of Advanced Research & Engineering, Seo Ho Choi, team leader of the Human Factors & Devices Research team, and Dong Jin Hyun, parts leader on the team – have traveled over to the US with the exoskeleton, and it’s they who are responsible for strapping me in.

Hyundai designed its prototypes to suit a South Korean test cohort. That means it’ll extend or contract to accommodate people from around 5’5 to 5’10, and under 220 pounds. At 5’8 I fall right in the middle of the height range, but even though I’m also well under the weight limit, I spotted a few knowing glances between the trio as they clamped the Velcro straps around me.

In the end, it felt less like I was settled into an exoskeleton and more like the H-MEX was hugging my chest and humping me. At just shy of 40 pounds it’s not especially heavy, or at least not noticeably so, since the weight is mainly supported on the leg braces. You stand on top of chunky feet assemblies, within which are the majority of the sensors. 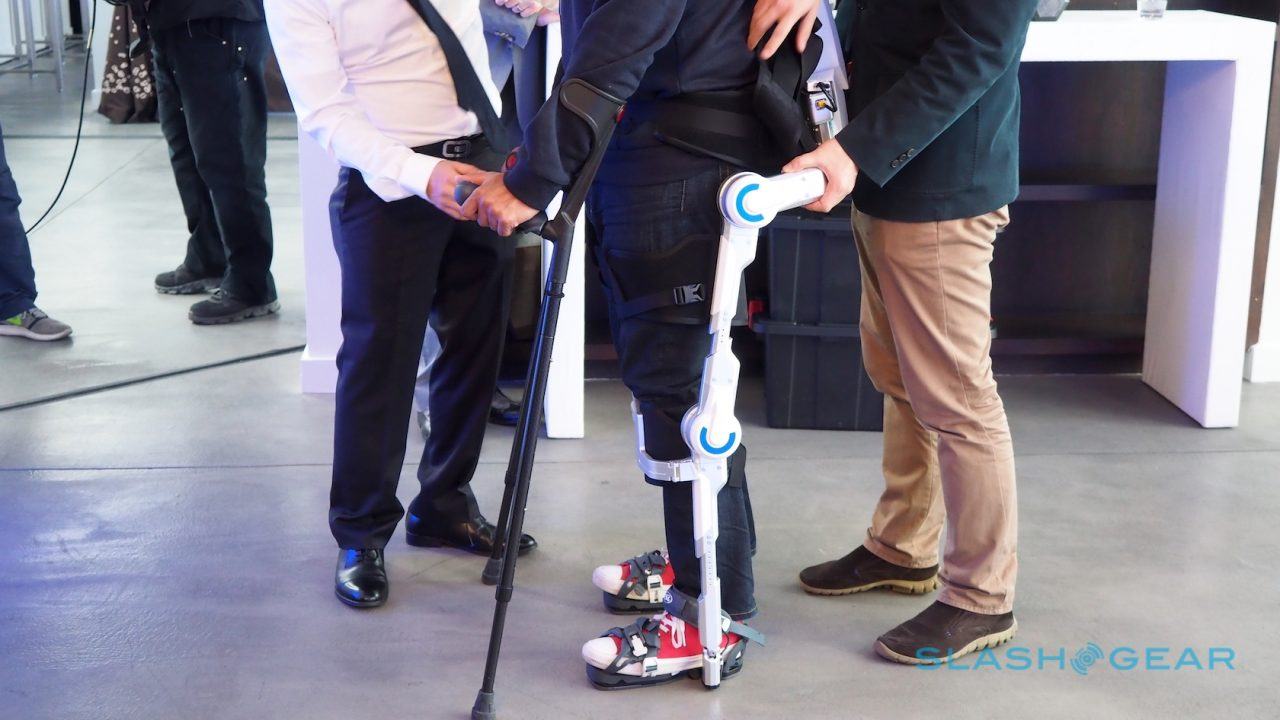 The theory behind walking with H-MEX’s assistance is simple. To step forward, you lean your weight onto one foot and the corresponding crutch; the suit knows you’re doing so because of the pressure tracking. Nothing actually happens, though, until you tap the control pad of four buttons on the handle of the left crutch: hit the top button, and the leg without your weight is lifted up, bent at the knee, and then moves forward. Hopefully, at that point you’re also supporting yourself with the other crutch.

The second step works in reverse: lean in the opposite direction, thumb the button – a little confusingly, it’s actually the same button – and the trailing leg lifts, bends, and shifts forward. If you want to stand upright, a different button brings both legs in line. A third helps you sit down or stand up.

It’s hard to escape the feeling that you’re going to fall, at least initially. My inclination was, as someone who has the use of his legs, to lift my feet myself; that, though, just worked to second-guess the exoskeleton. Instead, you have to give over all movement below the waist to it.

After a couple of minutes, I found I had got into a rhythm with the whole process. No, with a maximum speed of around 1.5 mph I wasn’t moving fast – if I and the H-MEX represent the upcoming robo-apocalypse then all you really need to do is walk at a reasonable pace to escape me, but please don’t tell my robot overlords that I told you that – but my pace was steady and I was covering a reasonable amount of ground. Turning is more low-tech right now, basically involving putting your weight on one foot and then shuffling round in a circle to face a different direction.

It was only when I’d stopped, and been released from the H-MEX’s eager embrace, that the reality – or the potential – of the exoskeleton hit me. Were I one of the 3.6m people in the US who currently use a wheelchair, according to the 2010 census figures, this could represent my first opportunity in years, or in my entire life, to walk upright. To be at eye-level with the people around me as I travel. 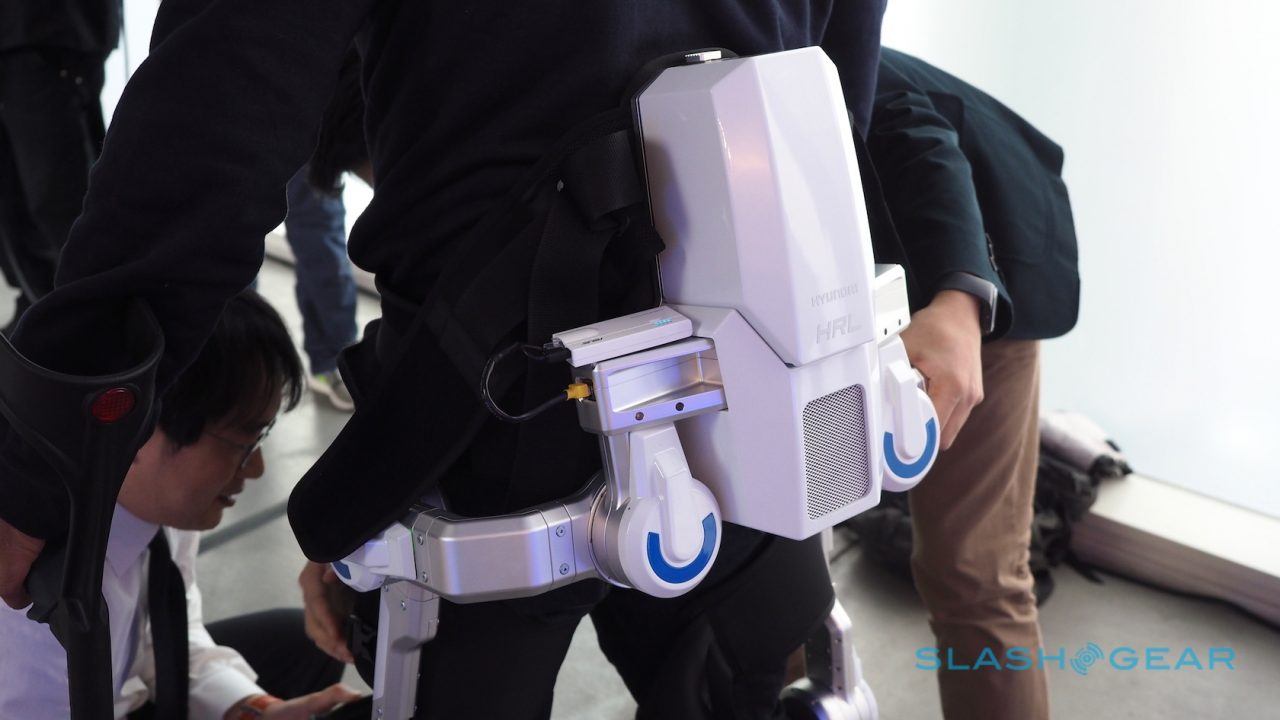 Hyundai (probably sensibly) didn’t let me test H-MEX on stairs, but the suit can go up and down them, too. The crutch controller pairs with the exoskeleton over low-power ZigBee, while there’s Bluetooth to link the whole thing to your smartphone. An app there can control gait, speed, and other factors. Total battery life is up to four hours on a charge. 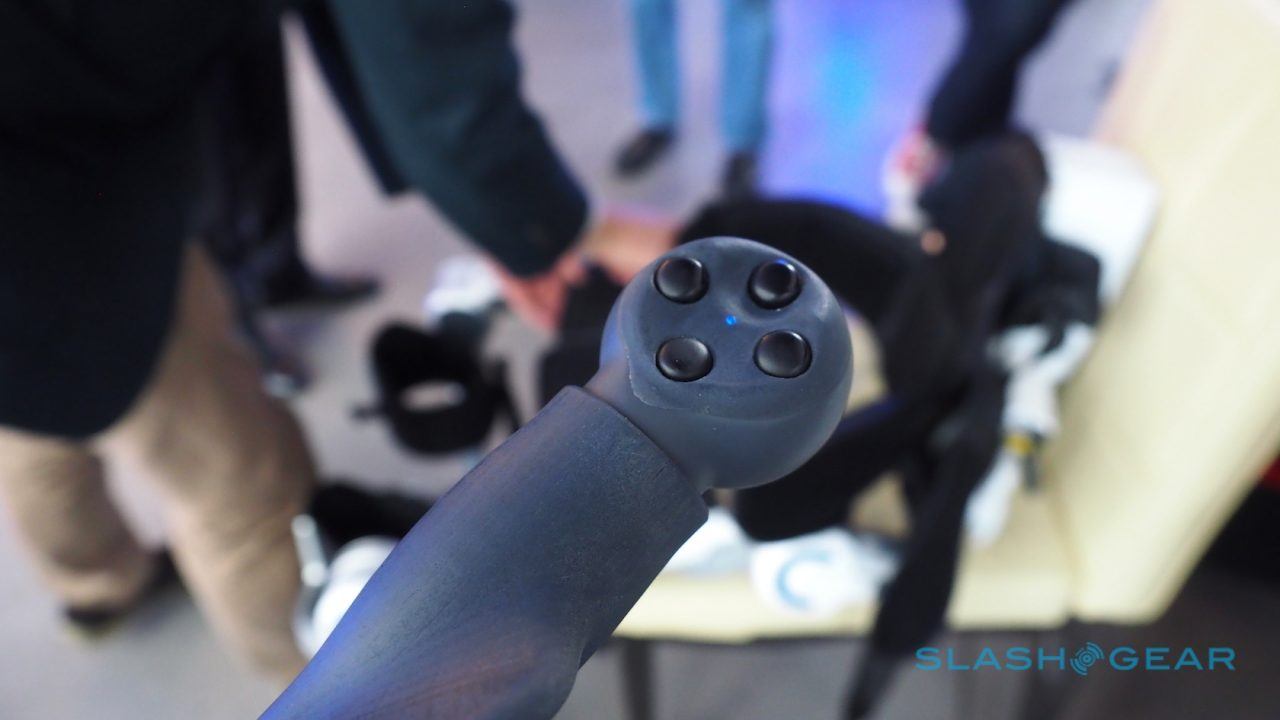 “This isn’t going to be a profit center for us,” Hyundai Motor America’s Mark Dipko, director of corporate planning and strategy, admits. “But, we do think we can make a meaningful change in this space.” Nor is it just a science experiment, with the team designing H-MEX to be easily transported on the back of users’ wheelchairs, and – with a little practice – easily put on and taken off.

There are still plenty of questions. Nobody at Hyundai would say how much the H-MEX is envisaged to cost, for instance, though they did insist that the economies of scale involved for them to do it rather than, say, a niche robotics startup would make a significant difference. The company is in the process of getting its official certification as a medical device in both South Korea and the US, which it expects to happen in 2018. Demonstrations with potential users will then take place over the next couple of years. 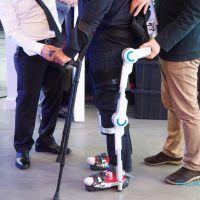 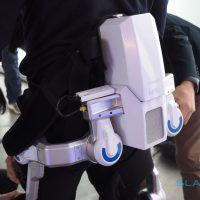 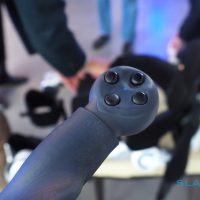 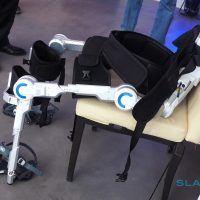 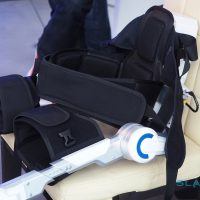