Leap Motion isn’t convinced that a touchscreen is enough: instead, it wants you to start waving. While gesturing wildly at your electronics may bring to mind Jean Michel Jarre or trying to play a theramin, the Leap Motion controller is a whole new ball-game. Little larger than a packet of gum, the USB peripheral sits in front of your keyboard and tracks everything that moves in the space around it, with the theory being that reaching out and grabbing a virtual interface is a whole lot more natural than pushing a mouse around or even swiping at a touchscreen. Is the reality so clean-cut? Read on for the full SlashGear review.

Considering the amount of cleverness going on inside, the Leap Motion controller itself is relatively nondescript. Measuring 3 x 1.2 x 0.5 inches, the silver and black box is designed to sit in front of your keyboard, in-between where your wrists would normally be. A USB connection feeds out the left side, though if you’re prone to poor ergonomics while typing, you might find it gets in the way of your left wrist. Alternatively, you can put it above the keyboard (assuming you’re on a desktop machine) though you’ll have to reach a little further forward to work within the “sweet spot” of tracking. 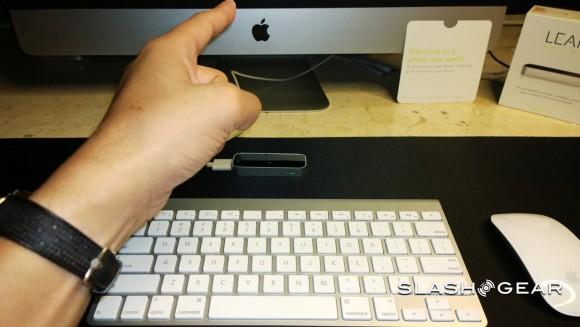 That area is actually around 8 cubic feet, though it’s shaped more like a dome with the Leap Motion at its base than a cube. It extends roughly a foot off the desk, and around a foot and a half across, and is capable of tracking not only your hands, but each individual finger and in fact the movement of each joint.

So far, we’re talking about a pretty advanced Kinect, but where Leap Motion’s system differs from the camera-based system Microsoft’s Xbox 360 uses is in the accuracy. The controller may be tiny, but it can still track each finger’s movement to up to 1/100th of a millimeter, with a refresh rate of 290fps. That’s sufficient, the company promises, to track handwriting or sketching if you hold a pen or pencil above the controller, grabbing even the tiniest of flicks and flourishes. 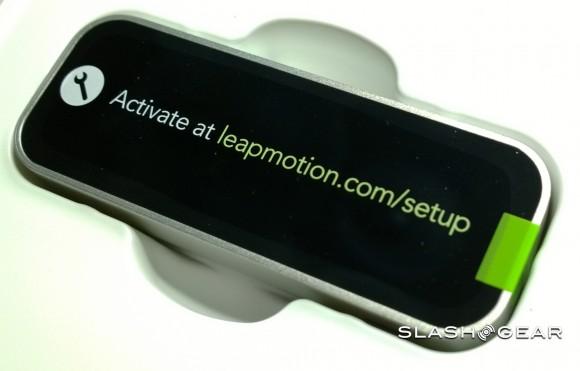 Setup is straightforward. The box itself plugs into your computer – either a Windows 7 or 8 PC, or a Mac running OS X 10.7 Lion or above – with one of the two included USB cables, with Leap Motion bundling a 60-inch cord for those trying to reach a tower case under the desk, and a shorter 24-inch cord for those with a closer laptop. 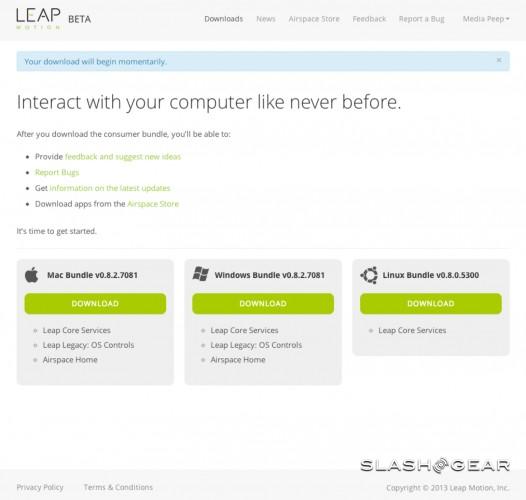 The light on the front of the controller goes green, and then it’s a case of visiting Leap Motion’s online account page to download the driver software. There’s also a straightforward “Getting Started” video which walks through some of the possibilities, and then – when everything has installed – creating an account for Airspace, Leap Motion’s app download store. 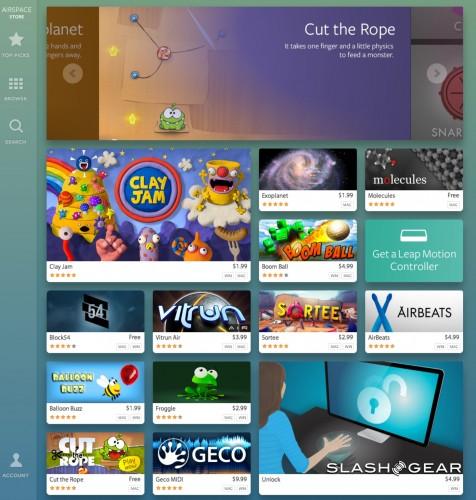 Apps at that store are downloaded through the Airspace Home launcher, and there’ll be free and paid options to choose between. Prices for the paid apps range from $0.99 through to $99.99 (that getting you AeroMIDI, which does actually turn the Leap Motion controller into a Jean Michel Jarre-style MIDI motion controller that works with soft or hard synths), though $4.99 to $9.99 is more common. Not everything is available for both PC and Mac, and right now in total there are around 72 titles to choose from. 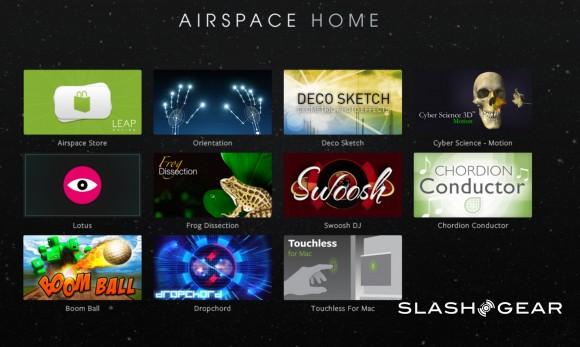 The first app most people will try is probably Touchless, available in versions for both platforms, and which effectively turns your hand into a mouse. Moving your hand in the space above the controller moves the mouse on-screen; stabbing a finger forward is a click, while swiping with multiple fingers extended works for scrolling. You can also pinch-zoom, again in mid-air, and there are different levels of precision to choose between – depending on how adept you are – which prioritize either precision, speed, or a combination of both.

It does take a little getting used to, but not much, and soon we were swiping, snatching at icons, flicking webpages around, and generally treating our Mac like it was a prop from Minority Report. We had best results when navigating through the browser, music playlists, or image galleries; it works in more precision-oriented apps like Photoshop, but it’ll take a little longer for our muscle-memory to retrain from a more traditional mouse or trackpad for those purposes.

The rest of the apps range from music players, through simple utilities like a movement-tracking biometric security lock, through art programs, to games, which dominate the Airspace store. There are also some science titles, including dissecting a virtual frog with your fingers. Integration with Google Earth and Nokia’s HERE Maps has also been included, so you can gesture through landscapes for instance.

It’s the sort of thing that works better when shown on video than in text, so we’ve picked out some of the highlights in each category to show you exactly what sort of movements are involved.

Better than a Touchscreen?

Used to be, a keyboard and mouse was enough. Now touch is the big new theme in computing, even though not every company agrees that it makes as much sense on the desktop as it does on, say, a tablet or smartphone. Apple is a notorious hold-out, but even with various PC manufacturers putting touchscreens on Windows 8 machines, there’s still plenty of models sold without. 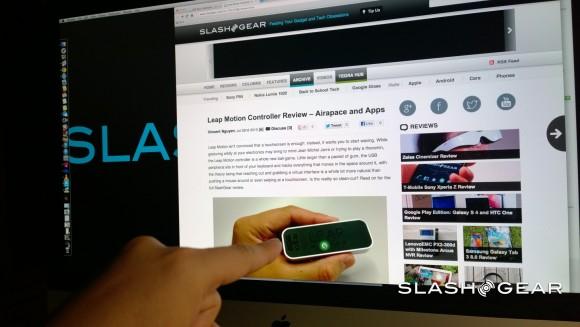 In many ways, reaching out and stroking your computer’s display really isn’t ergonomic. There are often times when the minimal hand-movement of flicking between keyboard and mouse/trackpad is far more efficient. Scrolling through webpages and articles, meanwhile, is a more natural home for touch, but again the usability of holding a hand out to do the navigating is questionable.

Leap Motion’s system won’t quite address that – you’re still holding out your hand for extended periods, even if it’s not to reach all the way to the display – but with a broader area of activity than two-dimensional touch it feels less of a chore over extended periods. Again, even with Touchless we found some apps were more Leap Motion-friendly than others, but the ergonomics of flicking a hand over your work-area in general are far more flexible.

How useful Leap Motion’s controller is depends on whether you try to use it as a mouse-replacement or as an addition to your desktop. We’d argue that, in this early iteration at least, the latter makes more sense: there were times we quickly went back to using our existing peripherals, but equally there were moments when casually gesturing through the browser or Google Earth felt far more natural using our hands.

At $79, the Leap Motion controller is roughly the same price as a high-end peripheral like a gaming mouse. That seems on the reasonable side to us, assuming developer interest continues and we see not only more titles in the Airspace store, but more standalone apps and games integrate with the high-precision tracking. Eventually, we can envisage a time when Leap Motion’s technology is simply built into your laptop or keyboard; until then, eighty bucks is a low-cost way of bringing some sci-fi magic to your desktop.