Earlier this year, Google’s newest Pixel 3 smartphones were leaked numerous times before their official announcement in October, and it looks like history is already repeating itself with a new mid-range model known as the Pixel 3 Lite. With less powerful specs and an expected cheaper price than the standard Pixel 3 model, the new Pixel 3 Lite was first spotted just over a week ago, with additional details quickly following. We now have another look at the unannounced device in the wild, this time next to its Pixel 3 sibling.

First posted by Russian Twitter user @jc_ru, the new photo makes the differences between the Pixel 3 and Lite immediately clear. Shown on the left, the Pixel 3 Lite features a taller 5.56-inch display with a 18.5:9 aspect ratio, as compared to the Pixel 3 (on the right) with its 5.5-inch screen and 18:9 ratio.

Reportedly codenamed “Sargo,” the Pixel 3 Lite has been revealed to use Qualcomm’s Snapdragon 670 processor, paired with 4GB of RAM and 32GB of storage. While this is a slower chip than the Pixel 3 and Pixel 3 XL, the Lite shares a surprising number of specs with its siblings that make it just as appealing, if not more, to many Android users.

First, like the standard Pixel 3, the Lite doesn’t make use of a notch in its display. It also features the same 12.2MP camera on the rear as the Pixel 3, which means mid-range or not it instantly has some of the best smartphone photography capabilities around. The Pixel 3 Lite also borrows the same 2,915 mAh battery from the Pixel 3, but the real gem is this: the Lite features a headphone jack. Aside from the processor differences, the only other real drawback is that the unreleased devices does away with the dual-lens setup on the front-facing camera. 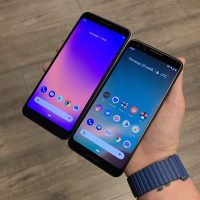 With leaks and sightings of the Pixel 3 Lite increasing, it’s likely an official announcement from Google is quickly approaching. There’s been no word on the device’s pricing or when it might be released, but the real question at this point is if the Lite will be available in all markets alongside the Pixel 3 and 3 XL, or if it’s only intended for specific regions.