Beats Music, the nascent streaming offering from Dr. Dre’s (mostly) hardware company, may not be off to the smashing success some had hoped for. A new leak suggests the service has just under 111,000 accounts, and pays artists an insulting amount per play. Conversely, the record label gets a bulk of the revenue from actual playback, which subscribers are said to be doing at an alarming rate.

The reported number of accounts actually hides the number of actual users, since 61.621 are “family” accounts. Those allow up to five people to access it, which could bring the actual number to just over 350,000. We’re sure the number is actually much lower, but the data still shows those who use the service — use it a lot.

Just accounting for individual accounts, the nearly 50,000 users played over 116,000 tracks in March of this year. That’s roughly 76 tracks per day, showing that Beats is on and thumping quite a bit in the background. Sadly, while we enjoy the music, artists likely aren’t enjoying revenues. 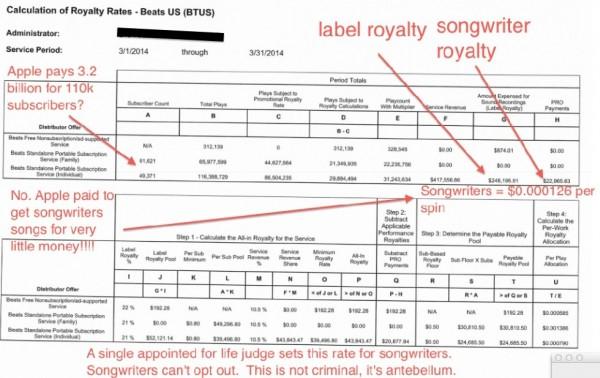 The leaked document which gave us these numbers, courtesy of The Tricordist and posted above, show artists who have their tracks streamed get roughly $0.00126 per play, a total of just over $22,000 in the month of March. Contrasting that is the record labels, which make just shy of $250,000 monthly. Though the “per play” royalty is a paltry $0.00136, it’s a lot stronger than what the actual artist makes.

We should point out that these numbers may be skewed by users still on a free plan. Some AT&T subscribers were offered Beats free for three months’ time, so we’re not sure how this plays out with regard to whether or not royalties will increase when everyone is paying. What we do know is that record labels get rich while artists are subject to agreements that leave them wanting.