Land Rover has unveiled a new concept system that makes the hood of the car see through so that the driver can see what is under the car and out of their line of sight. The tech is called the Transparent Bonnet concept and provides a full view of what is under and in front of the car, so drivers can see hidden obstacles. Land Rover says that the transparent bonnet system is part of a suite of concept tech being showcased in the Discovery Vision Concept car at the New York International Motor Show.

Land Rover uses cameras in the grille of the vehicle to capture video data that is sent to a HUD to create a “see-through” view of the terrain through the hood and engine bay of the car. The system also allows the driver to see the angle and position of the wheels of the vehicle. This could be of great use when people are off-roading in a Land Rover or driving in a confined space. 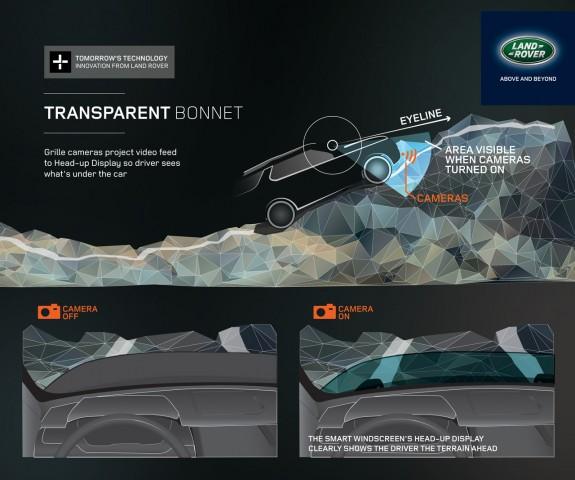 The tech involves a smart windscreen. It’s unclear if the HUD is a virtual system that uses a projector of some sort, or if the windscreen of the concept has a built in video screen. If the windshield has built in electronics, this will be a very expensive system that won’t likely come to market anytime soon.

Ford has integrated a much lower tech version of this system into its Raptor truck. In the Ford system, the truck has a camera in the grille that allows the driver to see what is directly in front of the truck on a steep incline or in tight spaces to make navigation easier. The video from that camera shows up on the radio LCD where the rear view camera would normally be shown.