Rugged smartphones meant for the trailblazer and the survivalist in all of us certainly aren’t rare, but it’s not very often that we get to review one. Kyocera recently announced the Torque, a mid-range smartphone that’s encased in a thick hard plastic shell that can absorb energy when dropped. It’s also water resistant and impervious to dust, and while the average hiker could easily take advantage of the device, the company also targets it towards construction workers and even parents who have small kids that can be more than a little rough with toys. Oh, and did we mention it’s Bear Grylls-approved?

The first thing you’ll notice with the Torque is its rugged look. It has a textured hard plastic Dura-Grip casing that protects it from drops, and every port is covered with a flap to keep water and dust out. The battery cover can come off, however, and it’s held on with a rather large screw that only requires a quarter turn to “unlock” it, so to speak. The cover is made out of a slightly-flexible rubber material to make it easy to pop off. Underneath the rear plate is a 2500mAh battery that powers the show, and it’s a slightly larger battery than we initially expected, but seeing how the Torque is meant for the adventurer, it’s critical to have a phone that can last all day. 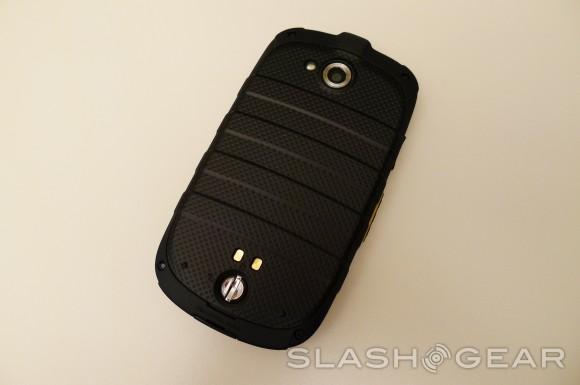 The Torque comes with a 4-inch IPS display with a 800×480 resolution. Of course, that’s not really all that impressive, and those looking primarily for a top-quality display will want to look elsewhere, but otherwise it gets the job done, and most people who would need a rugged phone most likely won’t even care about the display’s quality in the first place. The screen is covered with a pre-installed screen protector as well, but it makes the screen look slightly blurry. We’re not sure what kind of screen protector is on the phone, but we could definitely tell that it made text and small icons a little blotchy.

As for the internals, the Torque comes with a Qualcomm Snapdragon S4 dual-core processor clocked at 1.2GHz accompanied with 1GB of RAM. Sadly, it only has a measly 1GB of storage, but the phone has a microSD card slot that accepts up to 32GB of additional storage. The Torque sports a 5MP camera on the back, with a 1.3MP front-facing camera — more about that later. 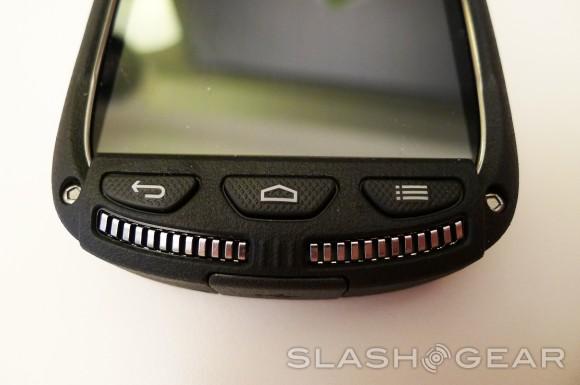 As for ports and buttons, the Torque doesn’t rely on touch-based soft buttons. The phone consists of all physical buttons, including the three navigation buttons on the front. On the right side, there’s a dedicated camera button that acts as a shutter button, but it won’t open up the camera app itself. On the right side, there’s a volume rocker and a big yellow button for push-to-talk communication. On the top is the power button and a toggle button for turning the push-to-talk speaker on and off. Also on the top is the headphone jack in the middle. Then, on the bottom you have the microUSB port and the microphone.

The Torque also sports front-facing speakers, which is quite a rarity nowadays, and we were surprised to see that on a phone like this. The device houses the speakers at the bottom right below the navigation buttons, and I found it to be quite nice not having to cup my hand from the rear in order to get the sound to direct to the front, so having front-facing speakers is a small, but huge feature on this phone. As for the earpiece, it’s actually built into the glass display, and it relies on vibrations to deliver sound to your ear. It’s a weird concept, but Kyocera claims it makes voice calling quality better, especially in loud environments, like at a concert. 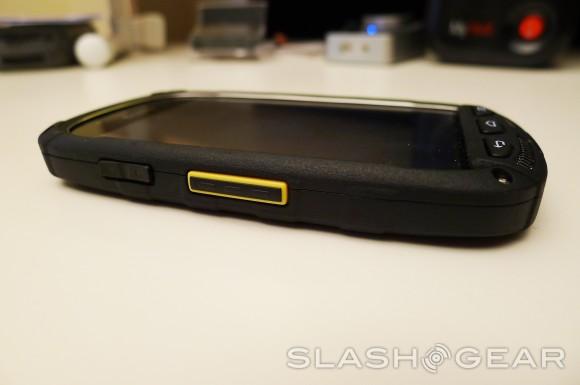 As for how rugged the Torque is, Kyocera claims it to be a pretty robust beast. The device meets Military Standard 810G, which applies to protection from dust, shock, vibration, temperature, rain, low pressure, solar radiation, and immersion in water for up to 30 minutes in up to 1 meter of water. I ended up dropping it a couple of times on my kitchen’s tile floor at different angles and it didn’t scratch it one bit, and it made more of a “thud” sound rather than a high-pitched cracking noise that you would get with most other smartphones. I even brought it in the shower with me and it was fine the whole time. However, Kyocera notes that the phone is inoperable while the screen is wet. We’re not sure if the phone disables itself somehow to avoid damage, but the phone stays on — you just can’t use it. In the end, you probably don’t need to worry too much about damaging the phone, which is something that most other smartphone owners can’t say about their precious toys.

The Torque runs Android 4.0 Ice Cream Sandwich, and the interface looks to be mostly stock, although there are a few pre-installed apps that may get in your way. Other than that, though, it looks like Kyocera mostly left the user interface alone, which is a huge plus for those wanting a true Android experience. However, those wanting the latest operating system will be disappointed for now, but Kyocera plans to upgrade the device to Jelly Bean within the next few months. 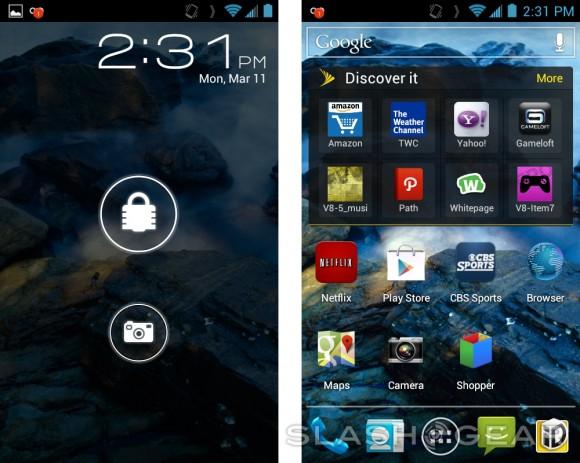 However, there are still a couple of Kyocera-exclusive features within the software, including a modified lock screen, that allows you to swipe the unlock circle in any direction to unlock the phone, and there’s also a camera icon that does the same thing. The icons at the bottom of the home screen are also just slightly changed up, with an ID app to the far right that allows you change the theme of the user interface.

The camera on the Torque isn’t the best, to put it simply. Even with adequate lighting, photos turned out to be really noisy, and white balance wasn’t working too well in most situations. Low-light capabilities weren’t too bad, though, but there was still a lot of noise in the photos, of course. I noticed that the camera would only focus the frame after I pressed the shutter button, meaning that as I was lining up my shot, the frame would remain blurry until I took the picture. At that point, the camera would quickly focus the frame and snap the photo. It only appeared to be doing that specifically with macro and other close-up shots, though. 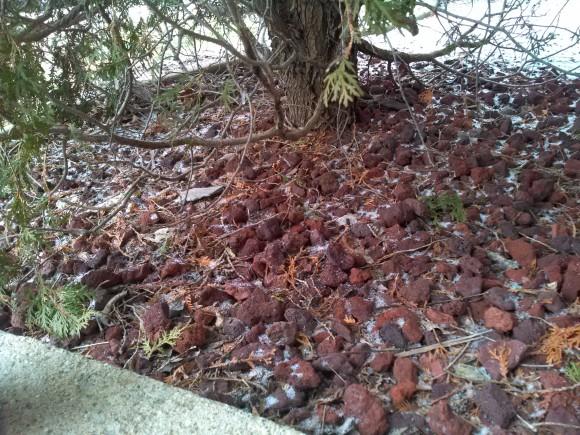 Video quality was subpar as well. Automatic exposure and white balancing were average, but it would take a few seconds to refocus if I moved the camera around. As with the photos, ISO and noise were apparent, and while the camera is capable of shooting in HD, the quality isn’t too great, and it mostly looks like a standard-definition video that was blown up to HD standards, which as you know, doesn’t have good results. Overall, if you’re going hiking and are planning to do some sightseeing, you may want to bring a dedicated camera to take photos of that beautiful sunset over the canyon.

We ran the Torque through our go-to benchmarking apps, Quadrant and AnTuTu, and the results were a bit better than we expected. In AnTuTu, the Torque scored a 10,500, which is right on par with the Samsung Galaxy Note and the Galaxy S II, while just lagging behind a bit from the ASUS Transformer Prime. In Quadrant, the Torque scored just under a 4,200, which puts it on par with the Transformer Prime and almost up to snuff with the HTC One X, which is quite impressive. 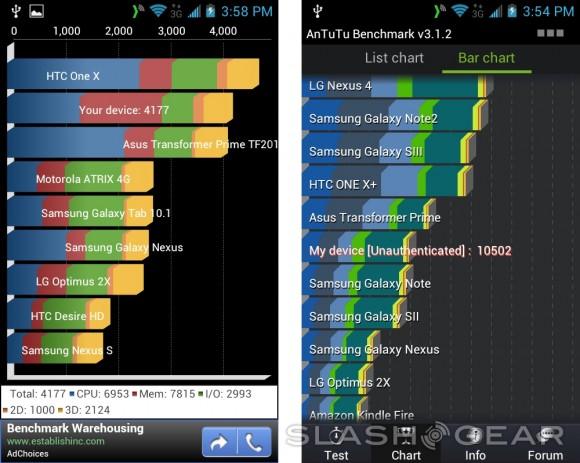 As for battery life, knowing that the Torque had a 2500mAh battery, I was expecting to go longer than usual with this phone, and that’s exactly what happened. Streaming Netflix TV shows and movies non-stop on the Torque ended up lasting eight hours before the battery even reached 25%, and with normal use, it was easily lasting a couple of days without a problem. Of course, the large battery mixed with the low power requirements of the internal components makes the Torque one of the few smartphones on the market that can last a long time on a single charge. 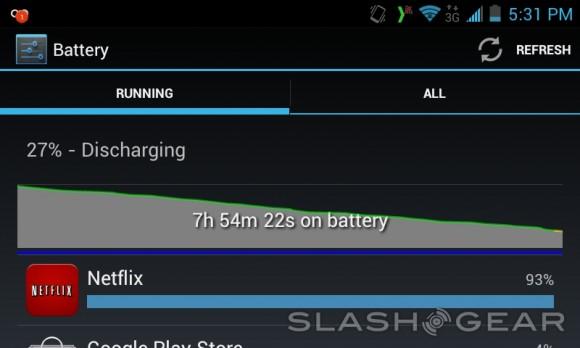 In the end, while the Torque probably won’t win any awards in the looks department, it certainly gets props for being an extremely rugged smartphone. There’s definitely some things that could be better if it wants to compete with the flagship devices currently on the market, so you’ll definitely have to make some sacrifices in the performance department if you’re wanting something rugged. Although, we’d almost just rather get a better phone, slap on an OtterBox case, and call it a day. 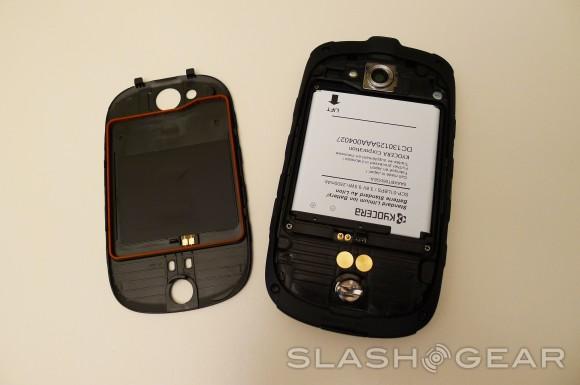