The Android tablet market is a huge wasted opportunity. The Apple iPad Pro now has the lion’s share of the mobile tablet market (as opposed to Tablet PCs) but many of its celebrated features have long been available on Android tablets before they practically went extinct.

Part of the reason for the less than enthusiastic adoption of Android tablets is the chicken and egg problem of apps, especially when it comes to content creation and creativity. At long last, Android has gotten what may be considered a “pro-level” painting app but does it have what it takes to revive what some consider an already dead device category? We take a quick dip into Krita’s first Beta for Android to find out.

Although new to Android and Chrome OS, Krita is hardly new to the class of software that has Adobe’s Photoshop as its poster child. Unlike Photoshop or any of the available painting apps on Android and iOS, Krita started out and remains one of the shining stars of the open source community. Although it has existed for more than 15 years now, it was only recently that Krita’s profile rose to become a fitting or even better alternative to Photoshop. 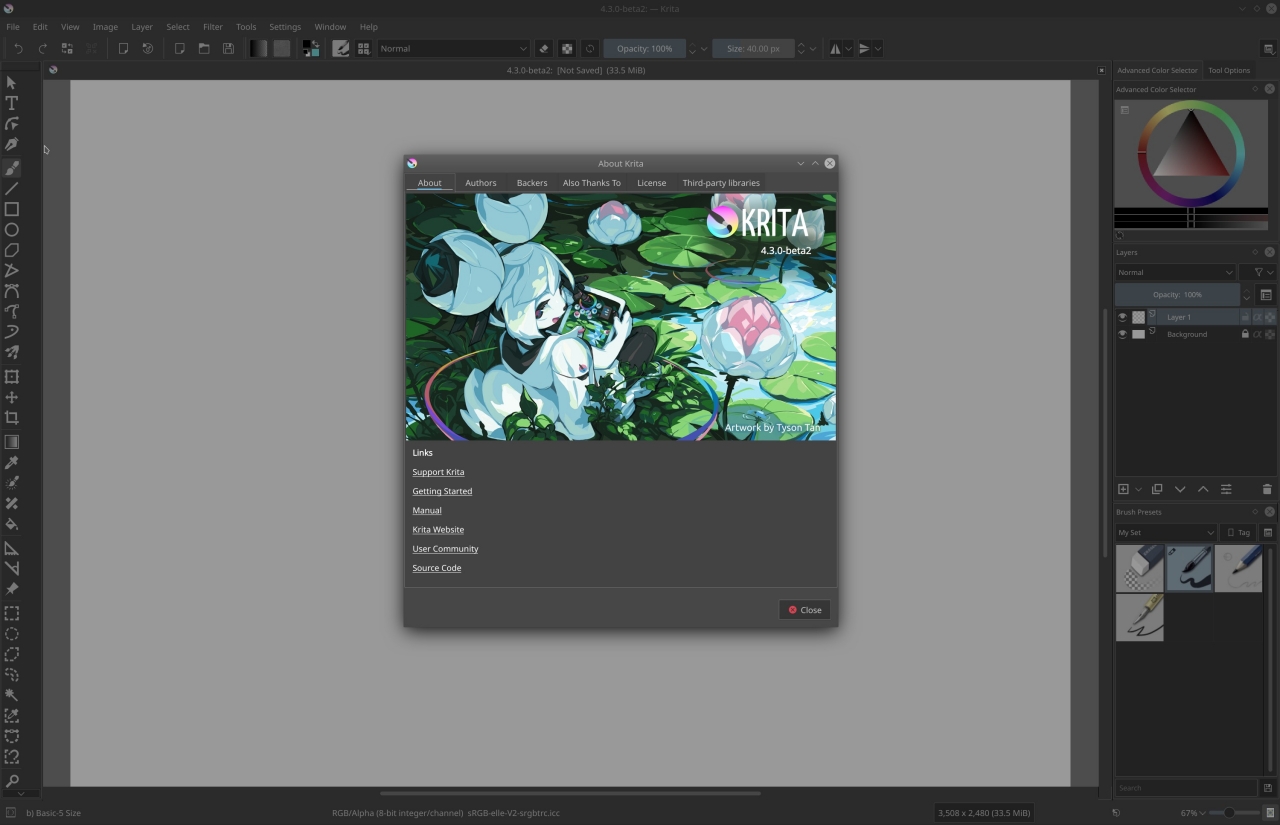 But while some might easily presume that being an open source project, it would have been trivial for volunteer contributors to make it available on multiple platforms, the reality is far, far from ideal. Fortunately, Krita’s foundations, specifically the Qt and KDE application frameworks, not only made it possible to even make that switch, it even made it possible to bring almost everything Krita has on the desktop to Krita on Android.

Krita was born and grew in a desktop environment and, for years, its focus has always been desktop users. That is clearly seen from the user interface that has pretty much been transplanted from desktop to Android wholesale. Of course, the relatively lower resolution of this Lenovo Yoga Book (1920×1080) makes everything look large but even a higher density device like the Galaxy Tab S6 would still look pretty cluttered with it. 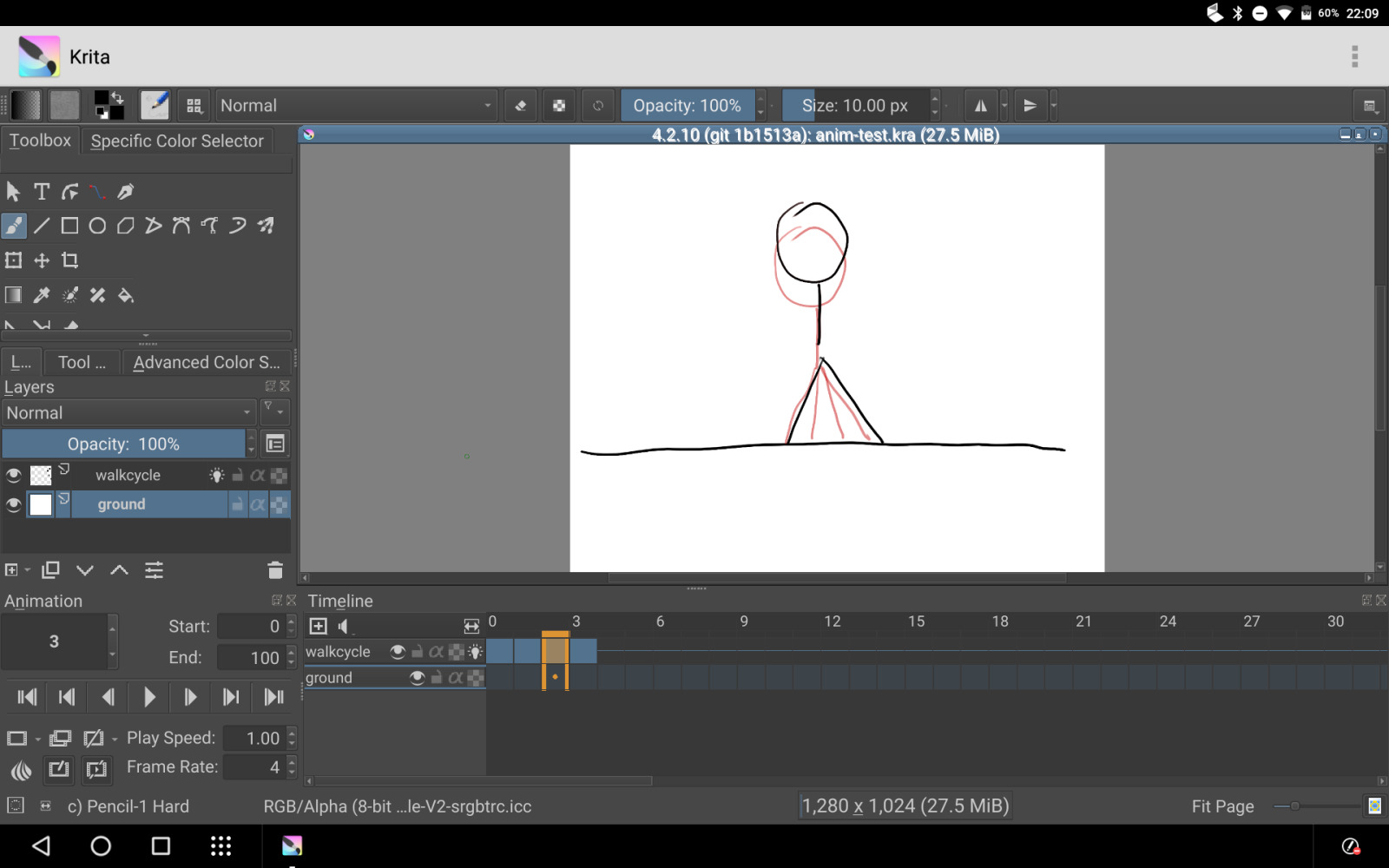 On the upside, however, it also means that Krita on Android pretty much has everything Krita on the desktop has and I do mean everything. All the workspaces, including Animation, is there as well as all the menus and configuration options. Of course, that does mean that Krita doesn’t follow many Android UX conventions but some artists might actually be fine with that. And, to be fair, Clip Studio Pro on iPadOS does the same as well.

As a painting app, Krita’s primary input device will, of course, be a stylus. That’s especially true on tablets where using a mouse, while possible, will be a pain anyway. You can probably try connecting a Wacom drawing slate to some ordinary Android tablet but, at least for now, the recommended devices include not only tablets but ones that support pressure-sensitive active styluses like the Samsung Galaxy Tab S line. One odd bug is that you ironically can’t use touch to change tools or “click” some buttons, forcing you to rely on your trusty stylus for some UI interactions. 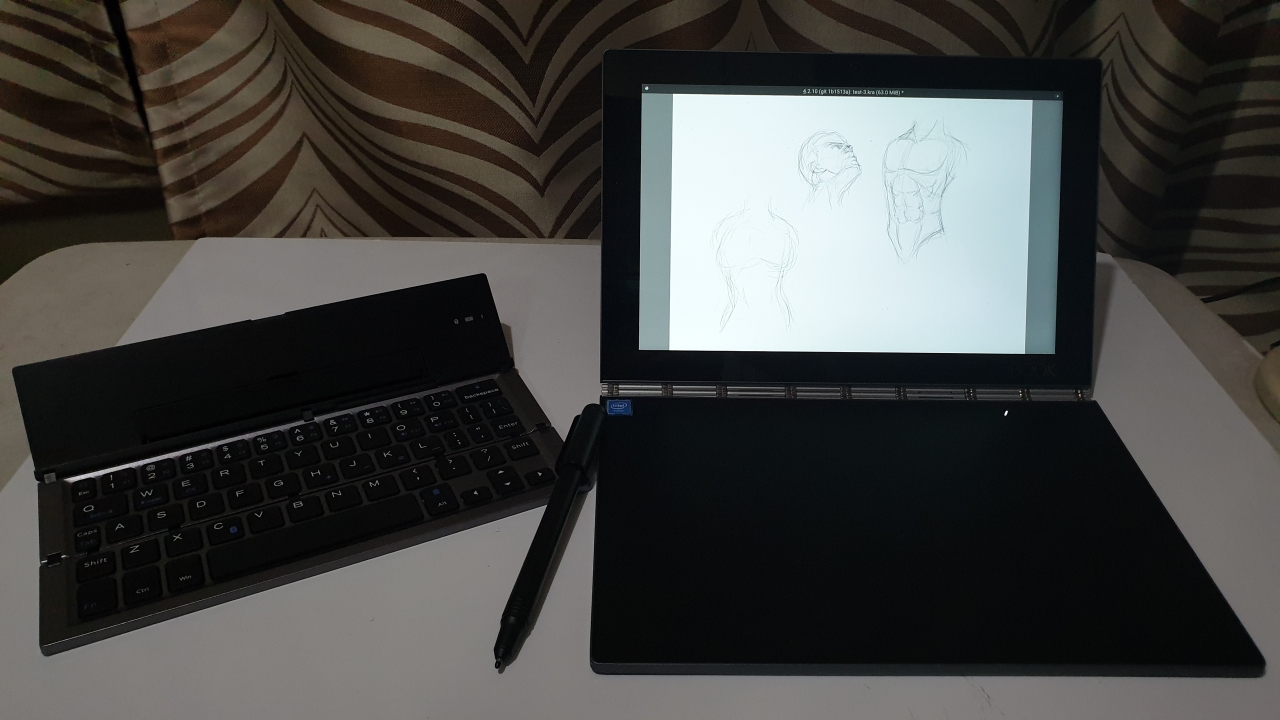 You will, however, most likely want to have a Bluetooth keyboard on hand as well, though, even if it’s a tiny one. And, no, a keyboard cover won’t do either. That’s because programs like Krita tend to use a lot of keyboard shortcuts and those are all available here.

For all the faults this first beta has when it comes to the UI, it is almost mind-blowing how smooth it actually runs this early in the game. It is, after all, running almost the exact same program that runs on the desktop and it’s a testament to Krita’s quality and its programmers’ skills that it runs so well on more constrained hardware. The Lenovo Yoga Book, for reference, is powered by an ancient Intel Atom x5-Z8550 with only 4 GB of RAM. 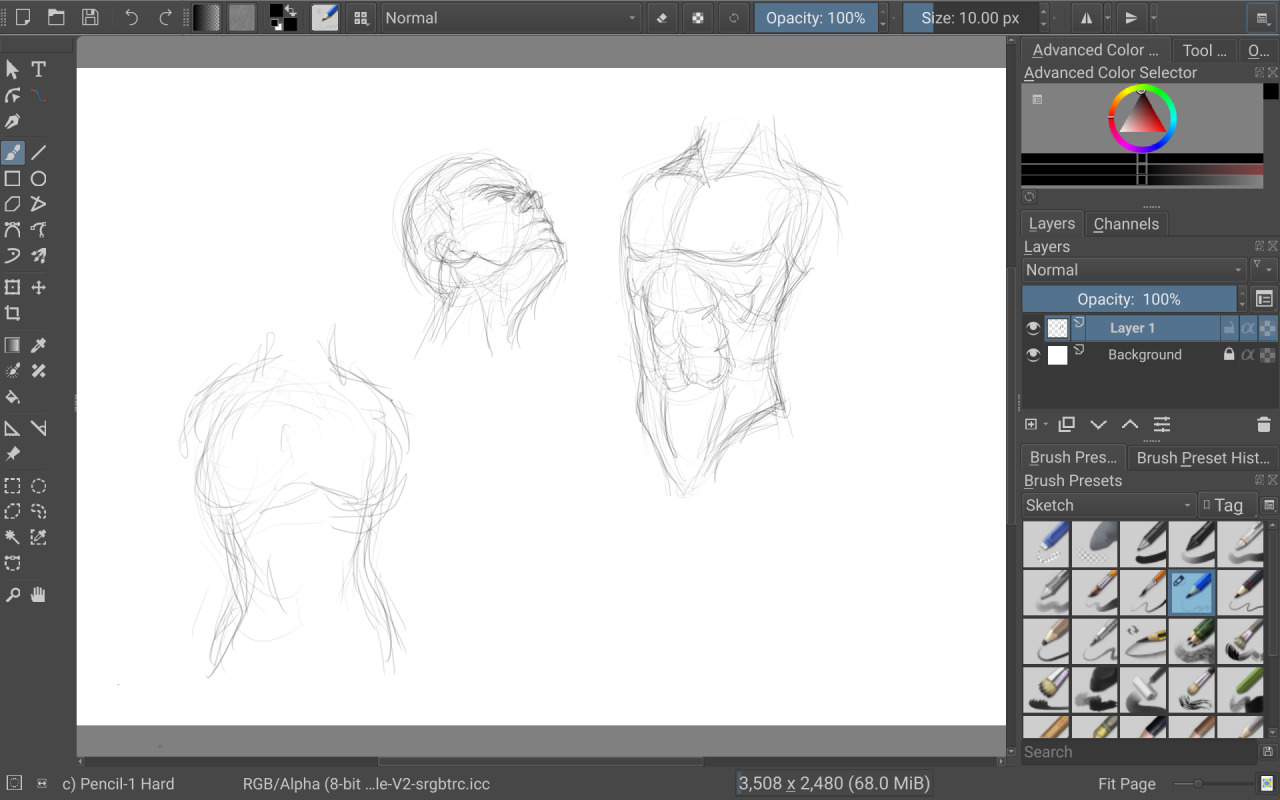 At least for a brief sketching session, there were no hiccups in both the drawing and the UI. Using touch gestures to zoom and rotate a 3508×2480 300dpi (default A4 size) is just as smooth. A few sketches on a single color layer on top of a white background layer used up only 63MB of memory which Krita helpfully displays at the bottom of the window.

While perfect on desktops, Krita definitely has a lot of rough edges for its first official venture into Android tablets. Its user interface is obviously not designed for touch-first devices like tablets and sacrifices usability to bring all the power and features of its desktop version to Android and Chrome OS. At the same time, however, the performance it was able to deliver right on its first beta is, without any doubt, an impressive achievement. 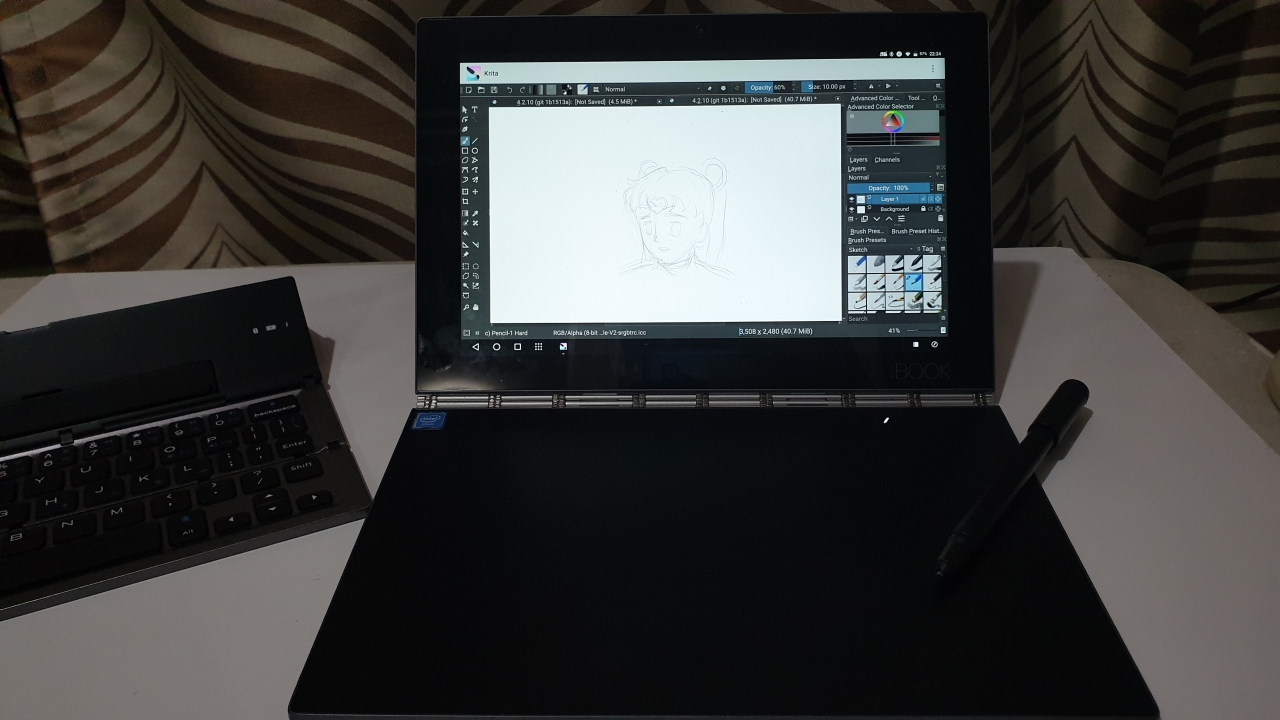 With that solid foundation in place, it might be easier for Krita’s developers to craft a UI better suited for touch screens and tablets and maybe even phones with “desktop modes” available. Then it would be in the perfect position to deliver the power and features that Android users have been dying to have from the time Android tablets, especially those with active styluses, came to be.

Whether that will be enough to revive that dried-up market, however, only time and a few more releases will be able to tell.