Kissenger Robotic kisser lets you make out from afar

There are people all around the world who are far away from loved ones or in long distance relationships with someone they love. A new device called Kissenger has been developed that aims to allow you to share kisses with your loved ones from afar. This device allows you to send kisses by smashing your lips against a rubber pad that is attached to your smartphone.

Kissenger is a two way device allowing the user to send and received a kiss at the same time and was developed by researchers from London specializing in haptics. The developer of Kissenger is a woman called Emma Yann Zhang and she says that she designed the device to help overcome problems that come with long distance relationships. The Kissenger system is an iPhone accessory and when they want to kiss they both press lips against the silicone pads on the bottom of the accessory that has force sensors inside. 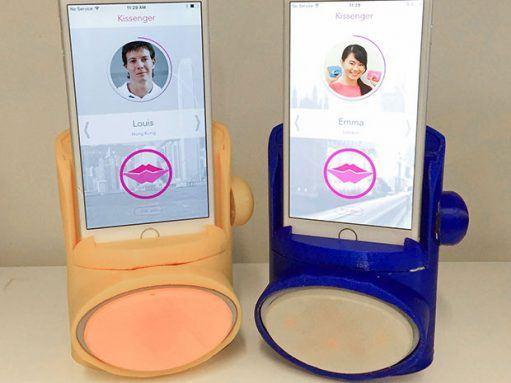 The pressure data and the pattern of the lips is transmitted in real time to the other unit where actuators beneath the surface push upwards to reproduce that lip pattern. Zhang figures that the device could also be used by remote family members to allow kids to plant a smooch on Grandma’s cheek. Zhang plans some lab tests for the Kissenger to test what she calls practical and “hedonistic” aspects of the device.

One test will have people in relationships trying the device and rating its usability in terms of pleasure derived from the experience. The researchers also plan to measure blood pressure and heart rate to see if those are affected during use of Kissenger as they are during a real kiss. The team will also use strangers to kiss via the machine and rate feelings of pleasure and empathy towards the partner.