Inside there’s JVC’s own Falconbrid LSI processing engine – last seen at CES 2011 in the JVC GS-TD1 3D camcorder, when the company promised us a 4k model was in the pipeline – which saves variable bit rate H.264 codec clips to SDHC or SDXC memory cards. Up to 144Mbps bitrate is supported, and the GY-HMQ10 can record up to two hours of 4k video to a card.

Using the touchscreen, users can crop an HD image from a 4k frame, or alternatively the camcorder can be used to capture 8.3-megapixel stills. Obviously 1080i or 1080/60p recording is also possible. There are manual level controls for audio – with both the LCD and viewfinder showing levels – and a microphone holder and two balanced XLR connectors with phantom power up on the handle. Even if you don’t hook up your own microphones, the GY-HMQ10 has an integrated stereo mic of its own.

JVC has added its own Focus Assist technology, as well as manual and auto focus, iris, gain, shutter, gamma, color matrix and white balance control. There are a full four HDMI ports, each capable of pumping out 4k footage in real-time.

The JVC GY-HMQ10 goes up for pre-order today, priced at $4,995, with deliveries expected to kick off in March. 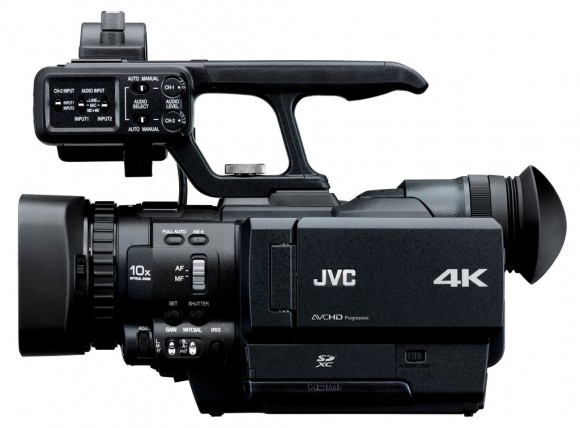