Three huge volcanic eruptions from Jupiter’s moon Io are forcing astronomers to rethink how peaceful space might be, with “curtains of fire” consisting of tens of cubic miles of lava surging from the orbiting mass. Fountains of lava gushed from gaps in Io, one of Jupiter’s four moons, in a two week period in August 2013, NASA says, despite having previously been thought to be rare events.

In fact, scientists had believed them to take place only one to two years, and with less brightness than the trio of eruptions Io suffered twelve months ago. The moon, closest to Jupiter and measuring roughly 2,300 miles in diameter, is the only known object in our solar system which, like Earth, has actively spewing volcanoes.

Unlike Earth, however, Io has very low levels of gravity. That means that rather than spread down and around the volcano, the lava instead forms huge debris umbrellas that stretch far out from the moon. 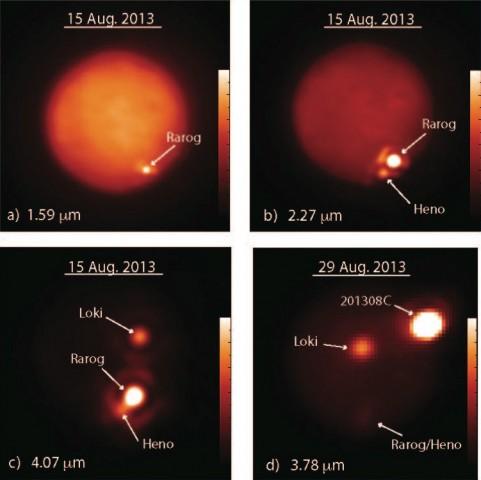 The science team responsible for the findings used infrared imaging to track the activity, which at its most aggressive is believed to have spurted out from Io in a 30 foot thick flow. Next is figuring out exactly how much mass was erupted.

With that data, and better understanding of how often volcanoes actually behave, the astronomers hope to refine the model of planetary creation in the galaxy, including how our own moon formed. Io may be smaller than Earth, but its activity is comparable to that of the inner planets in the solar system many years back.

Late in 2012, astronomers observed higher than expected levels of sulfur dioxide gas which suggested that Venus could also have live volcanic activity. Then, earlier this year, footage from the Venus Express orbiter confirmed sightings of hot spots on the surface of the planet, in accordance with volcanoes still simmering.