JmGO View packs a 180″ screen into a small package

The idea of portable projectors has been around for a while. Several companies make them, but the hardest part is making something portable that can actually show a decent-sized picture that’s not washed out. Plus, you’re stuck using your phone’s speakers for audio. That might be alright for a business presentation in conference room with the lights off. But JmGO thinks they’ve got something better.

The JmGO View is a new portable projector that goes beyond just being a simple projector. We’ll come back to that in a second, though. The View promises to deliver a 180″ 720p picture in virtually any room that has a white wall or screen. It’s completely portable, and offers 3-4 hours of battery life, which should let you watch a movie or two without needing a charge.

It’s more than just a simple projector with an HDMI port. Housed inside of the cylindrical metal casing is a small Android computer with 16GB of storage. If you’ve already loaded up your content, you’ll be able to watch it directly from the device itself. You can also plug in a flash drive with content, or load up the Netflix app and connect to a WiFi network. Additionally, there is an HDMI port for connecting a computer, console, or anything else you’d like. 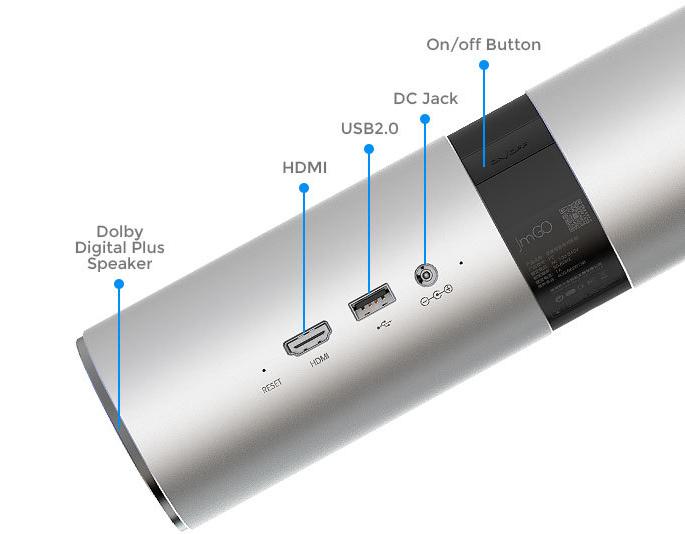 The View packs a 250 lumen bulb, and a pair of 4 Watt Dolby Digital Plus speakers. These should be enough to provide a bright picture, and clear audio for you and anyone else you’re watching movies with. Currently, the View is being sold through an Indigogo campaign. They’ve already blown past their $100,000 goal after only a few days. If you’re wanting to pick one up, they’re celebrating with a special price of $385. The regular Indigogo price is $499, and after the campaign has ended, they’ll retail for $599.