FCA can’t seem to keep things under wraps when it comes to the highly anticipated Wrangler-based truck that has been in the works for a while now. The truck is expected to debut at the LA Auto Show, and if that happens, it will be one of the biggest reveals of the show. Ahead of any official details on the Jeep truck, which is now expected to be called the Gladiator rather than Scrambler, the FCA Media site page for the truck went live too soon.

The media site gave up several pictures and some specifications for the truck before it was pulled down. One key takeaway from the images is that it will be offered in a hardtop convertible and a soft top version, just as the JL Wrangler is offered. Some of the images also show a soft bed cover made out of the same material as the soft top.

Images show the Gladiator in Rubicon trim, presumably, it will have all the trick off-road gear that the Rubicon JL offers like electronically detachable sway bars and lockers from the factory. The gray truck may be a Sahara trim as base Sport Wrangler trims don’t feature body-colored tops unless base models can be optioned that way in Gladiator form.

As for looks, the truck is precisely what we all thought it would be, and looks dead on for the renderings we saw back in April. It’s essentially the Wrangler JL Unlimited with a truck bed on the back. Specs from the media page tip the ability to ford up to 30-inches of water, Command-Trac and Rock-Trac 4×4 systems are tipped with third-gen Dana 44 axles.

Standard tires will be 33-inch units, and the truck can tow up to 7,650 pounds and haul up to 1,600 pounds of payload. That is significantly more than the Wrangler can tow. “Dozens” of soft top, door, and windshield configurations are tipped, and the windshield will fold down. 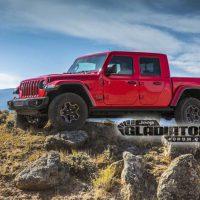 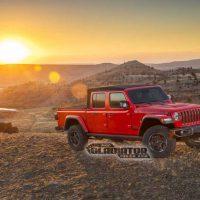 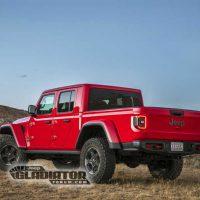 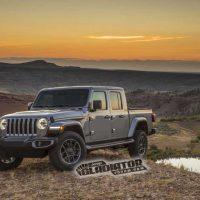 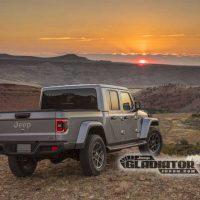 One cool option tipped is a forward-facing off-road cameras to see obstacles in front of the truck when off-road. Engine options include the 3.6L Pentastar V6 with start stop tech mated with an 8-speed auto or 6-speed manual. A 3.0L EcoDiesel V6 with ESS and an 8-speed auto will land in 2020. The crew cab configuration has a five-foot steel bed. There are no details on length, which is a big deal for serious off-roading, or pricing information.