First came the JAMBOX, Jawbone‘s play on the portable Bluetooth speaker, all the way back in 2010. Then the JAMBOX got supersized, as the BIG JAMBOX, for those times when more music meant more fun. Finally, we have the new baby of the bunch, the Jawbone MINI JAMBOX, a sleeker version of the original intended to fit it in pocket or smaller bag. We’ve been putting the $179.99 speaker through its paces; check out our first impressions after the cut.

The MINI JAMBOX’s lineage is clear. A long, narrow slab of aluminum, the speaker comes in a range of grill finishes – 3D diamonds in our review unit, but with a choice of five in total – and nine different colors: silver, black, cobalt blue, turquoise, yellow, green, red, orange, and purple.

No matter the finish, all get the sturdiness that comes from being made from a single piece of extruded metal, while inside it’s airtight so that the acoustic cavity performs at its best. There’s also Jawbone’s LiveAudio system, which promises to make the audio more all-encompassing in a virtual 3D sense. 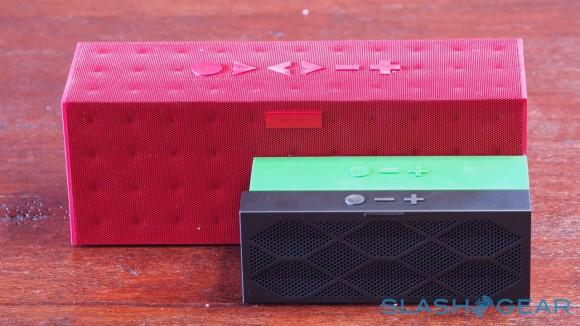 Even without it, though, the audio performance is solid. Jawbone uses Bluetooth A2DP for its streaming, and despite the compact size – 6.06 inches long, and 2.88 x 0.96 inches in cross-section – it sounds great. There’s not the same fullness of sound that the larger models provide, and the MINI JAMBOX understandably starts to run out of bass and treble more quickly than its older siblings, but it’s certainly good enough for impromptu entertainment when the speakers on your phone fall short of volume or clarity.

There’s also speakerphone functionality, and the MINI JAMBOX’s new Jawbone app for iOS and Android allows the multifunction button to be customized according to the feature you use most often. That can include a particular contact to dial, or to trigger the iPhone’s Siri assistant. The app is also used to switch between the eleven voices on offer for audio feedback, as the speaker guides you through the options. 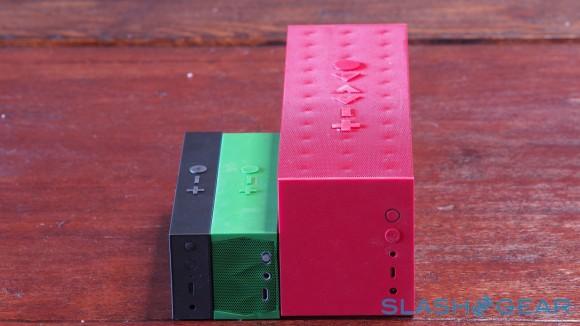 Meanwhile, give the same app your Spotify and Rdio credentials, and allow it access to your iTunes music, and it will pull them all together in one place, complete with playlists. Right now, the iOS app is the only one with music support, however, though Jawbone tells us that it’s in the pipeline for Android.

What we’re not so keen on is the absence of NFC, for easier pairing. That’s something we’ve seen increasingly featured on other portable speakers, but Jawbone told us that it still couldn’t see the value in including it. Admittedly, pairing the MINI JAMBOX and a phone isn’t an especially arduous task, but we do like NFC for the ease with which you can transfer playing music from device to speaker. 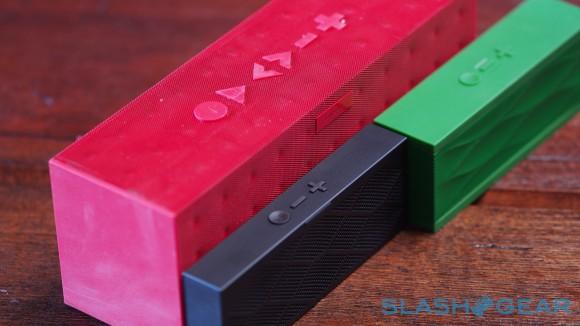 As for the battery, Jawbone rates the non-removable pack as good for up to 10 hours of solid playback, or up to 75 hours on a single charge.

Overall, there’s a lot to like about the MINI JAMBOX, and in fact the convenience of the smaller, lighter form-factor means we’d probably lean toward it rather than the original JAMBOX. Those with a taste for louder audio, or who don’t demand such portability, will get better results from the BIG JAMBOX, though, which still takes the crown in the Jawbone trio for audio refinement.