There are countless sophisticated ways these days to forge a signature, but none are as exquisite, eccentric, and expensive as this. OK, this isn’t an illegal, counterfeiting machine but the Jaquet Droz Signing Machine will save you from the pain of having to sign something over and over again, potentially giving you carpal tunnel syndrome. Presuming, of course, you can afford this odd contraption.

Announced way back in 2014, this Signing Machine looks more like something that came from an alternate steampunk world. Instead of scanners, lasers, and printers, the machine, which takes the form of a small box, is full of gears and shafts, almost like a clock. Not surprising, of course, considering Jaquet Droz mostly sells gorgeous watches with exposed gears and all sorts of mechanical wizardy. 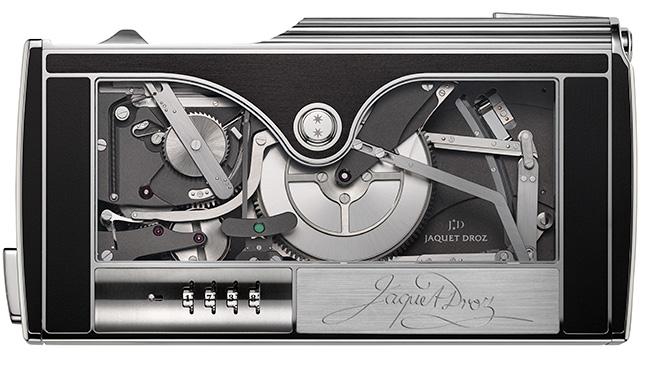 The company was named after Pierre Jacquet-Droz, an 18th century watchmaker who rose to fame more for his dabbling in machines and automata. That includes a 6,000-piece mechanical boy called “The Writer” that is able to write with a quill on paper via some input keys and a form of programmable memory that predated Charles Babbage’s computer.

The Jacquet Droz Signing Machine is almost like a pocket version of that, except that it can only write one thing: your signature. To prevent actual, unintended forgery, you have to key in a four-digit code, pretty much like a a modern-day PIN code. Stick a pencil in it and then watch the strokes flow.