How smart does a watch have to be before you call it a smartwatch? Jaeger-LeCoultre isn’t trying to fit the new AMVOX2 Transponder into the latest wearables category, but the watch that’s also a remote control for your Aston Martin certainly has geek-appeal, with controls invisibly built into the cover glass to lock and unlock the car.

In fact, this is the second generation of the watch, the first having been released all the way back in 2000. Then, however, it was limited to supporting a single model of car per timepiece: if you swapped out your Aston for a different model, you’d also have to buy a new watch. 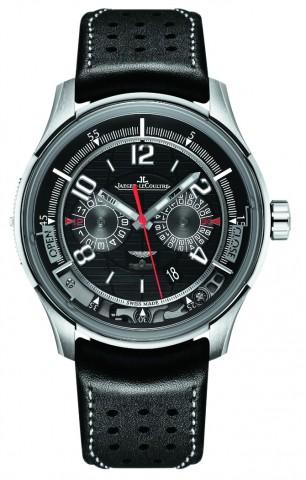 This updated AMVOX2 Transponder, however, addresses that with a completely redesigned wireless module, the result of what Jaeger-LeCoultre says was eighteen months of R&D. Now, the same watch will work with any model of Aston Martin.

Pressing on the left of the watch crystal unlocks your car, while pressing on the right locks it up again; you can also flash the headlamps to make finding it in a parking lot easier.

Meanwhile, pressing on the top or bottom starts and stops the chronograph; useful for timing your race-track runs if you’re lucky enough to actually own an Aston.

While the transponder part is electronic, the rest of the watch is mechanical as you’d expect from the watchmaker. Of course, none of it comes cheap: budget $29,500 for the AMVOX2 Transponder on top of your Aston of choice.