We live in an electricity-powered world, which shouldn’t really be news, but we will always find a time when electricity isn’t always readily available. Be it a power outage at home, going off the grid in the wilderness, or simply being meters away from a power outlet, there will come a time when we wished we had a power source we can carry around that is more powerful than a smartphone power bank. The Jackery Explorer 1000 definitely fits the bill when it comes to raw power but is that all that it can offer? We take the company’s newest and biggest portable power station to see if size is all that it has.

The Jackery Explorer 1000 is huge, the biggest “portable battery” we’ve reviewed so far. Of course, comparing it to the Anker PowerHouse 200 is like comparing apples to watermelons as the difference in power is quite significant. Fortunately, the Explorer 1000’s size belies its actual portability.

To be clear, the thing is heavy. 22 lbs (almost 10 kg) heavy to be exact. It’s not something you’ll want to carry around a lot, especially not like a flashlight despite the bulb’s almost puzzling location on the front. That said, the Jackery Explorer 1000 is actually lightweight compared to its peers in the 1000W department, some of which weigh 38 to 40 lbs. 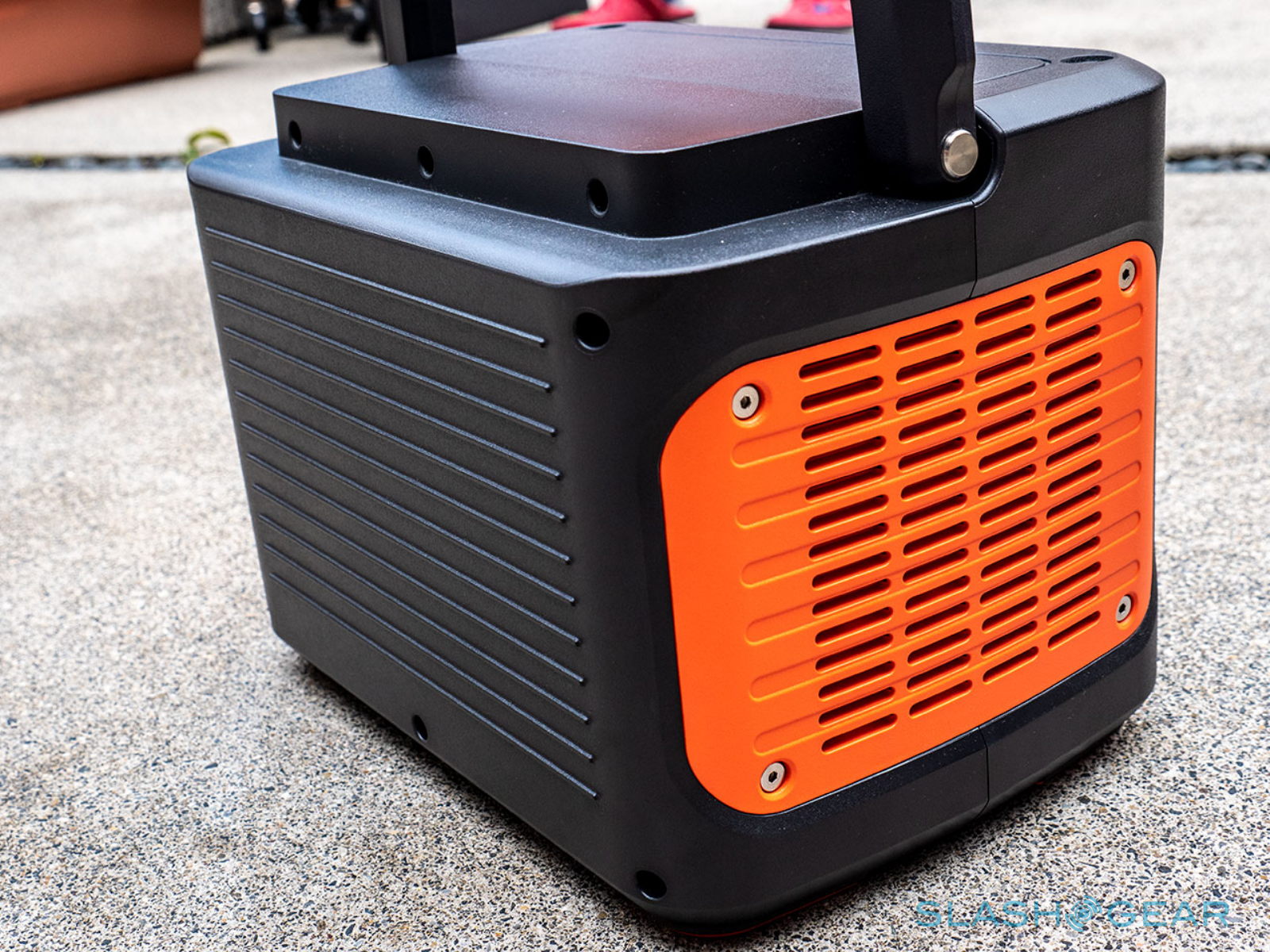 That makes the Explorer 1000 a wee bit portable, something the built-in solid carrying handle does help with. Jackery chose to use lightweight components and materials, like the plastic chassis that encloses the power station. Make no mistake, it still feels solid, more like industrial plastic, but it’s still something to keep in mind when you take it on the road.

Full disclosure, the review unit that Jackery sent us was a Japanese version that had one very important design change. The handle could be folded down to make more room in storage or placing something on top, in contrast to the fixed handle on the US model. Some might worry about the durability of having hinges on such a heavy load but others will probably also wish they had the flexibility instead. That said, the Japanese model also loses the flashlight functionality since the hinge is exactly where it would have been. 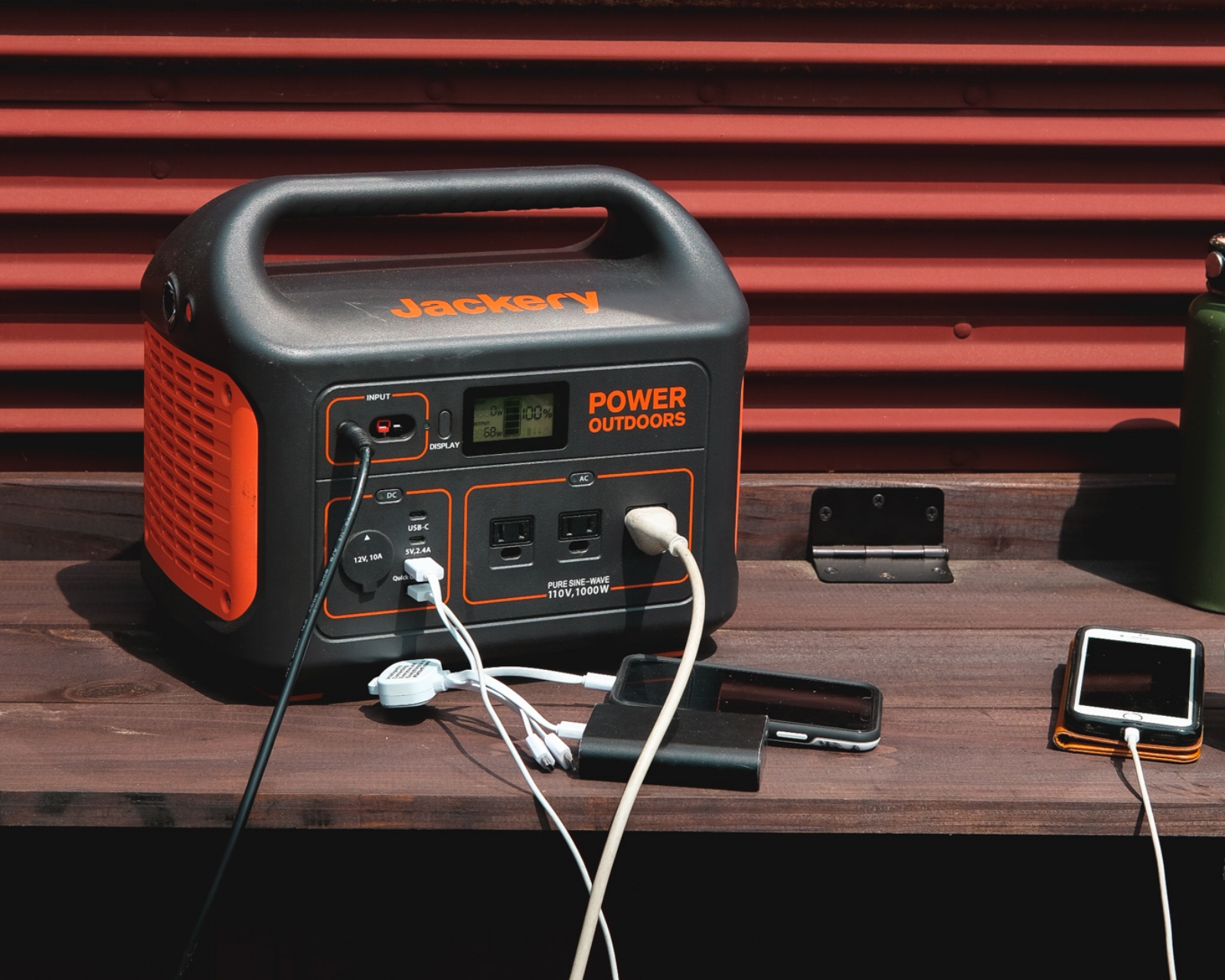 The Explorer 1000 is a powerhouse if its name didn’t already give that away. With a 1002W battery (21.6V, 46.4 amp), it can power even a home refrigerator when the lights suddenly go out, as long as it operates below the 1000W mark. You can even connect as many devices as you want, just keeping in mind the total power consumption. 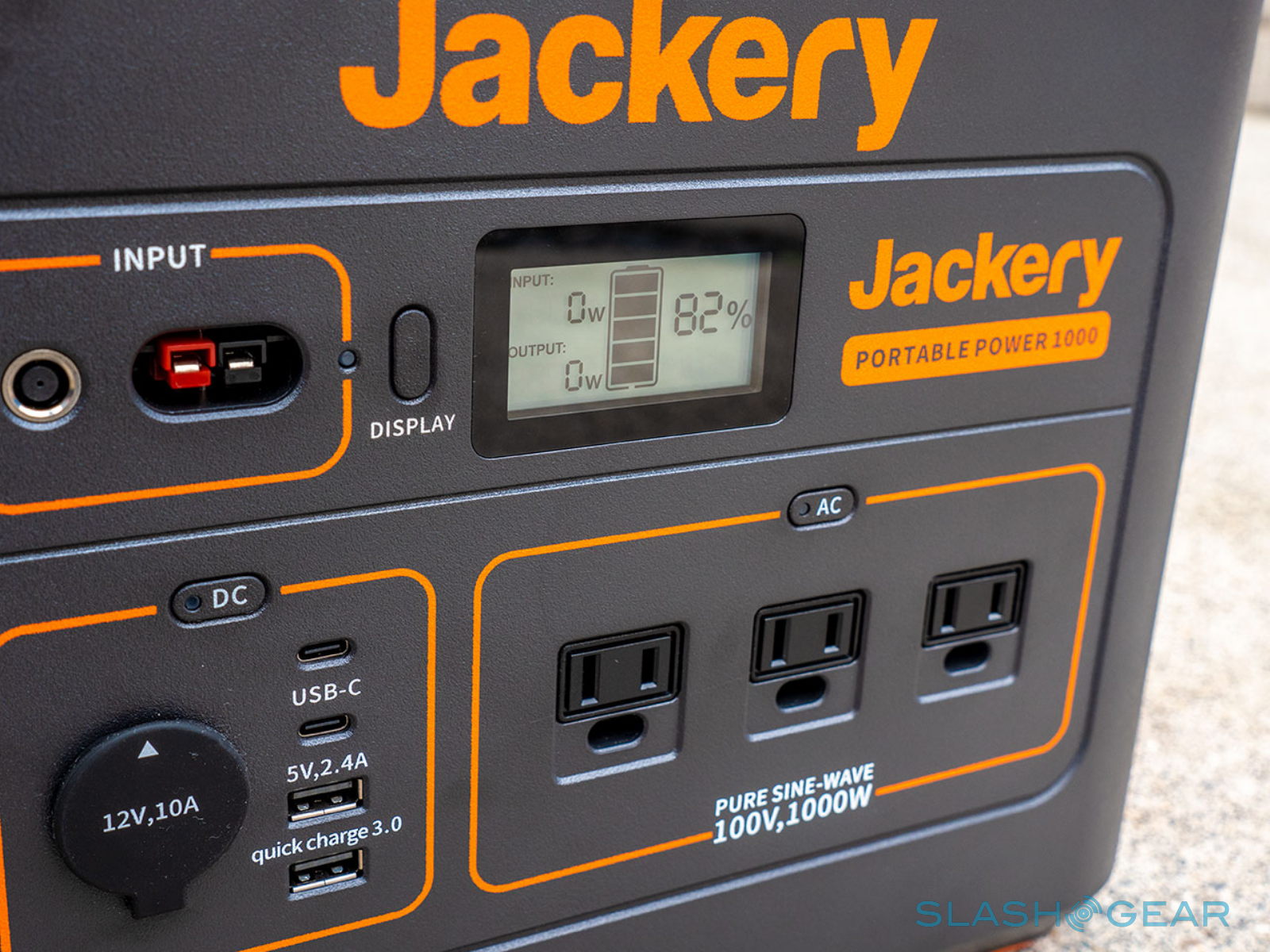 Indeed, you’ll be able to connect as many as you want, well almost as many as you want, thanks to the plethora of ports available. You have two USB-A ports, one of which supports Quick Charge 3.0, two 18W USB-C ports, and three 100V AC outlets. Oh, yes, there’s also a 12V car charger, of course. These are grouped in DC and AC outputs with a Display on top for showing input and output watts, capacity, and percentage left.

These three groups are all guarded by their own buttons, which you have to press to turn on and to turn off. In this day and age, automatic detection should be the norm. Not to mention the possibility of accidentally pushing those buttons while the power station rocks back and forth in your trunk.

Power output and efficiency are pretty decent, with a 300W rice cooker using up only 4% while in use for 15 minutes, while a 660 rice cooker used up 20% more for a longer period of time. 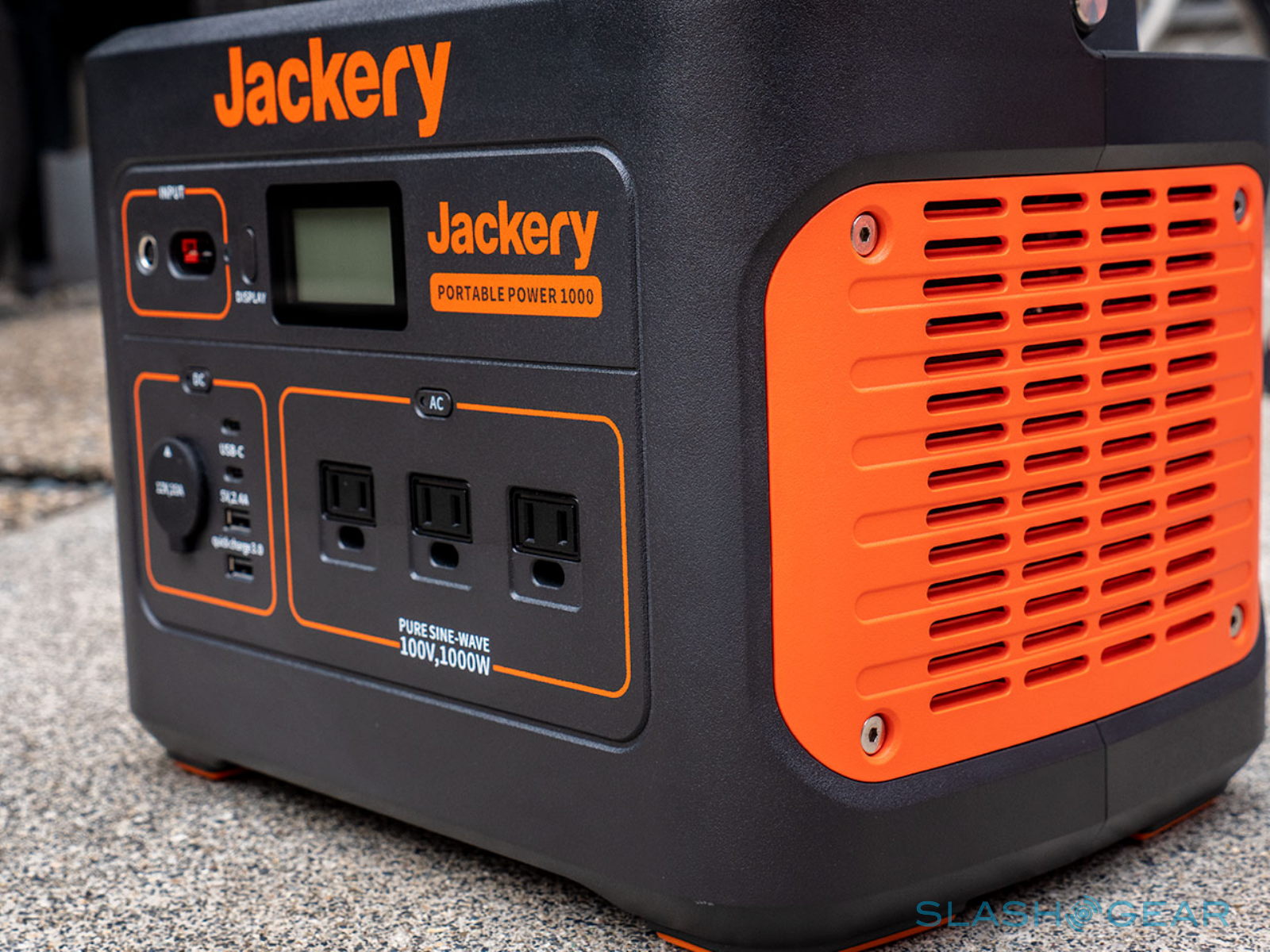 Another modern expectation these days is USB-C power, and while the Jackery Explorer 1000 meets the bare minimum, it’s exactly just that. With 18W Power Delivery, you can charge many smartphones and some tablets but heavier computers like laptops and MacBook Pros are out of the question. Of course, there is are three AC outlets to choose from, but that does presume you have your charging brick at hand.

The Explorer 1000 isn’t a generator so, of course, it has to be charged sooner or later. Despite the power station’s large size, it still has the equivalent of a power brick needed to charge it. That inverter charged the Explorer 1000 from 38% to 100% in 4 hours, which is more or less in line with the advertised 7-hour charging time. With a maximum input of 200W, this is one area where Jackery falls slightly behind the competition. 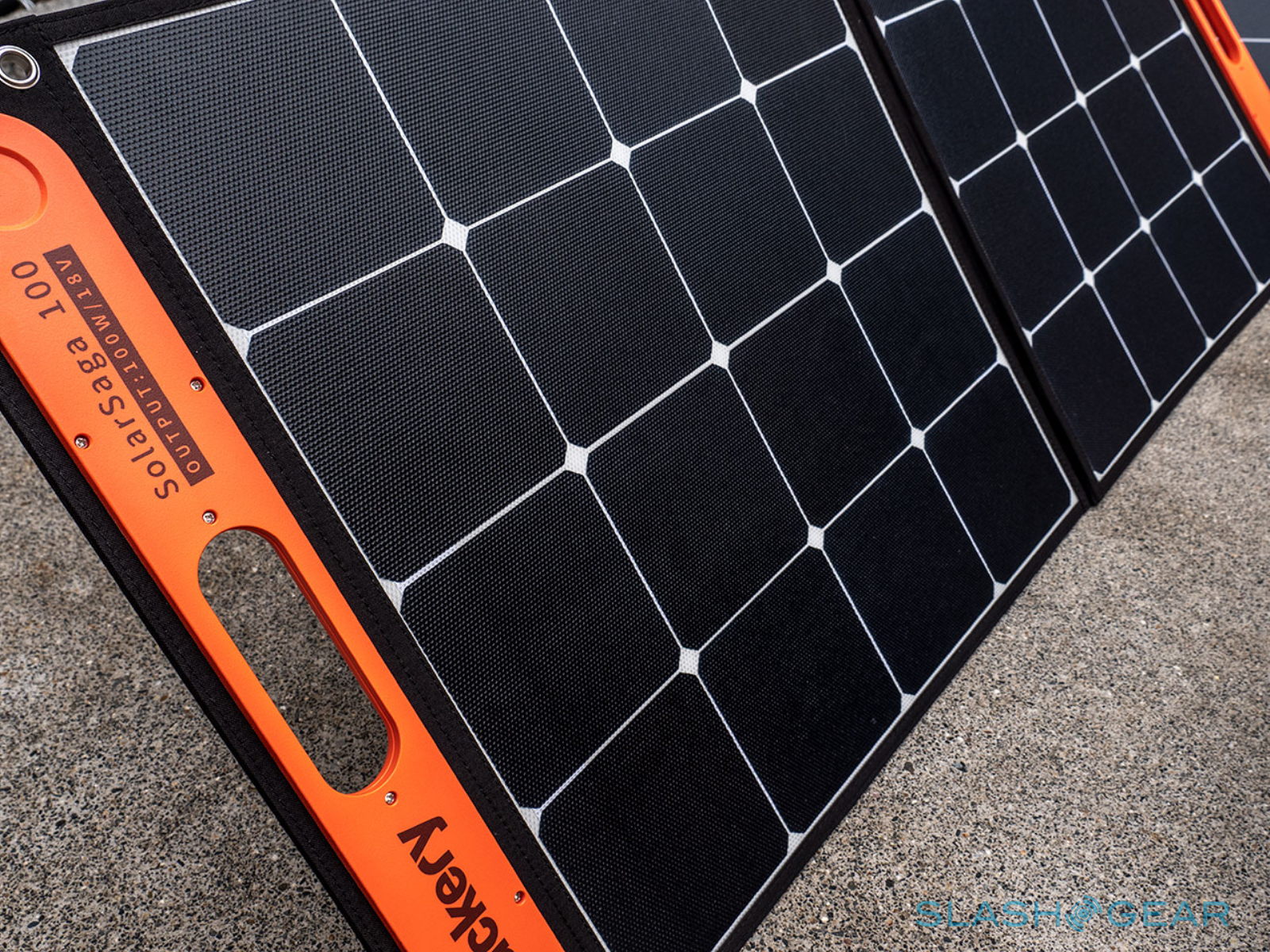 Things get a bit more interesting but also slightly more complicated with optional solar charging. Jackery sells 100W SolarSaga charging panels and you can use at most two of these at once to juice up the battery. You will, however, need to also buy a separate Y-cable to connect those two solar panels to the Explorer 1000, which Jackery also dubs as the Explorer 1000 Solar Generator, otherwise you can only connect one at a time. 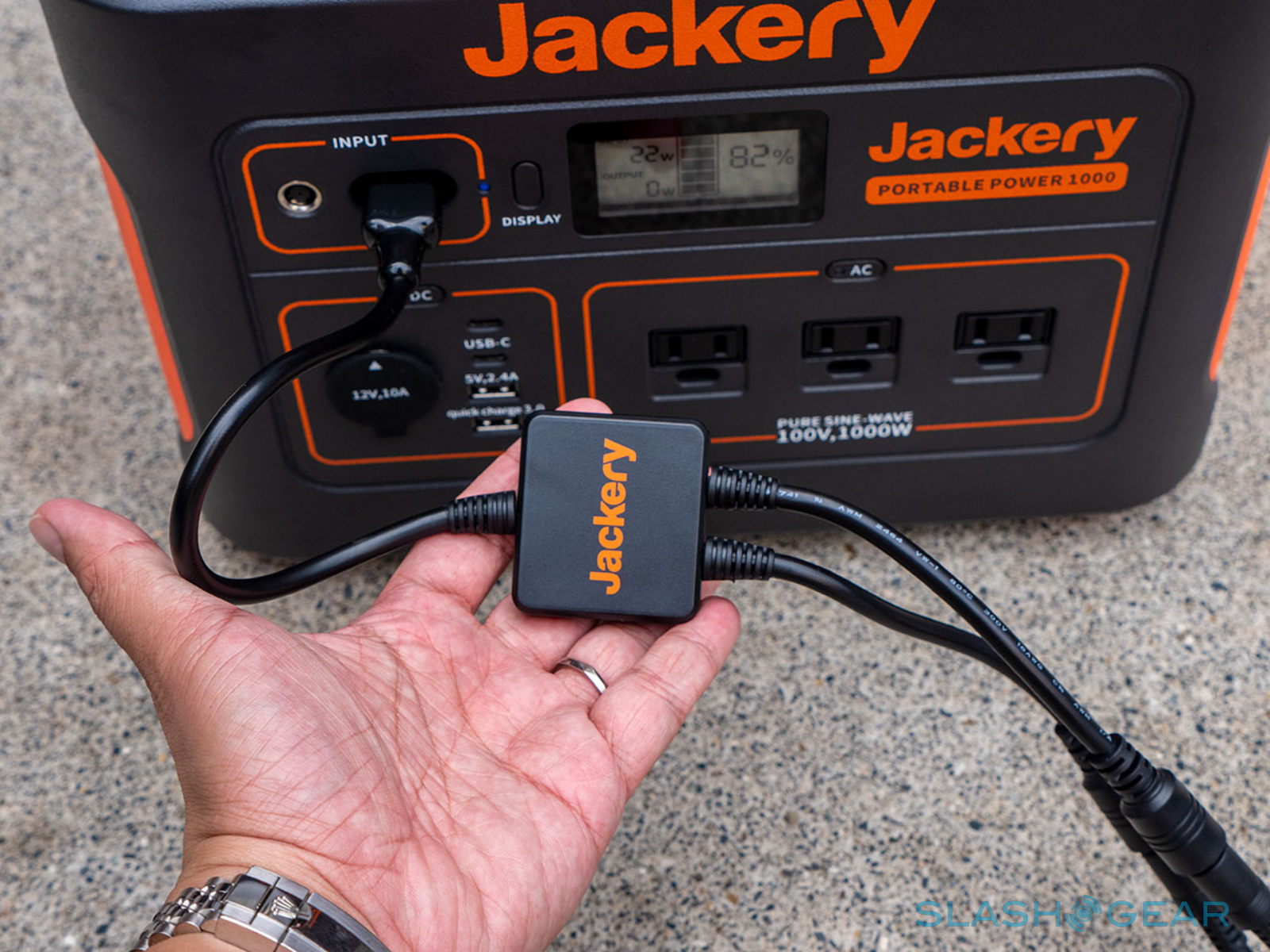 Solar charging is, of course, slower, with solar charging and it also largely depends on how much sunlight is available outdoors. With a single panel, you can only get 85W on a bright and sunny day and 30W max on an overcast one. With two panels together, the output went up to 120W under the full blast of the sun.

All in all, it took 6 hours to charge the Explorer 1000 from 42% to 96% with solar charging, whereas Jackery advertises around 8 hours. 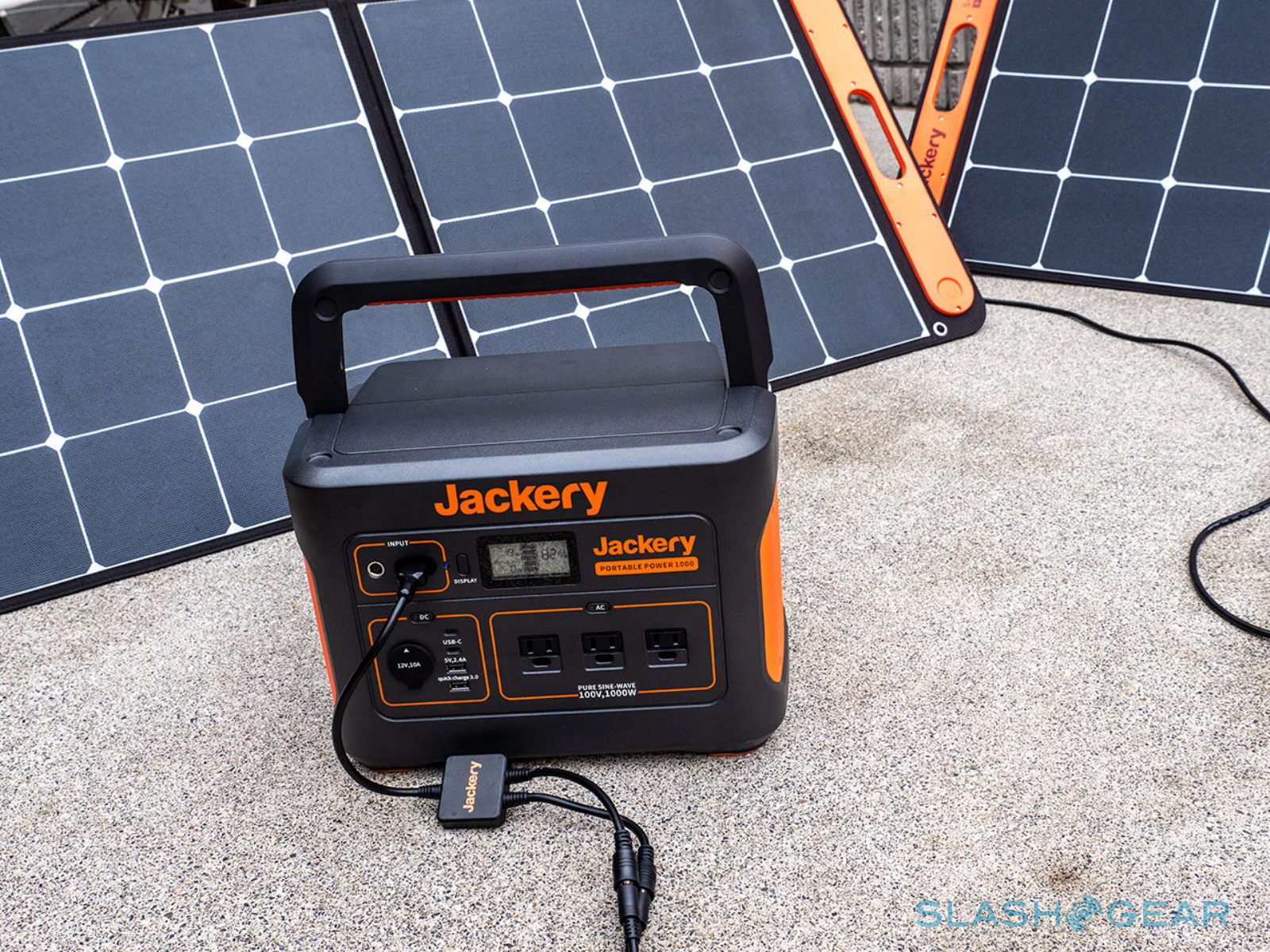 At $999.99, it feels like you are paying $1 per Wh with the Jackery Explorer 1000. It definitely looks pricey in isolation but you can’t avoid comparing it with its peers and rivals. Both the Goal Zero Yeti 1000 and Bluetti EB150 have a few advantages but also come at a higher price and twice the weight. 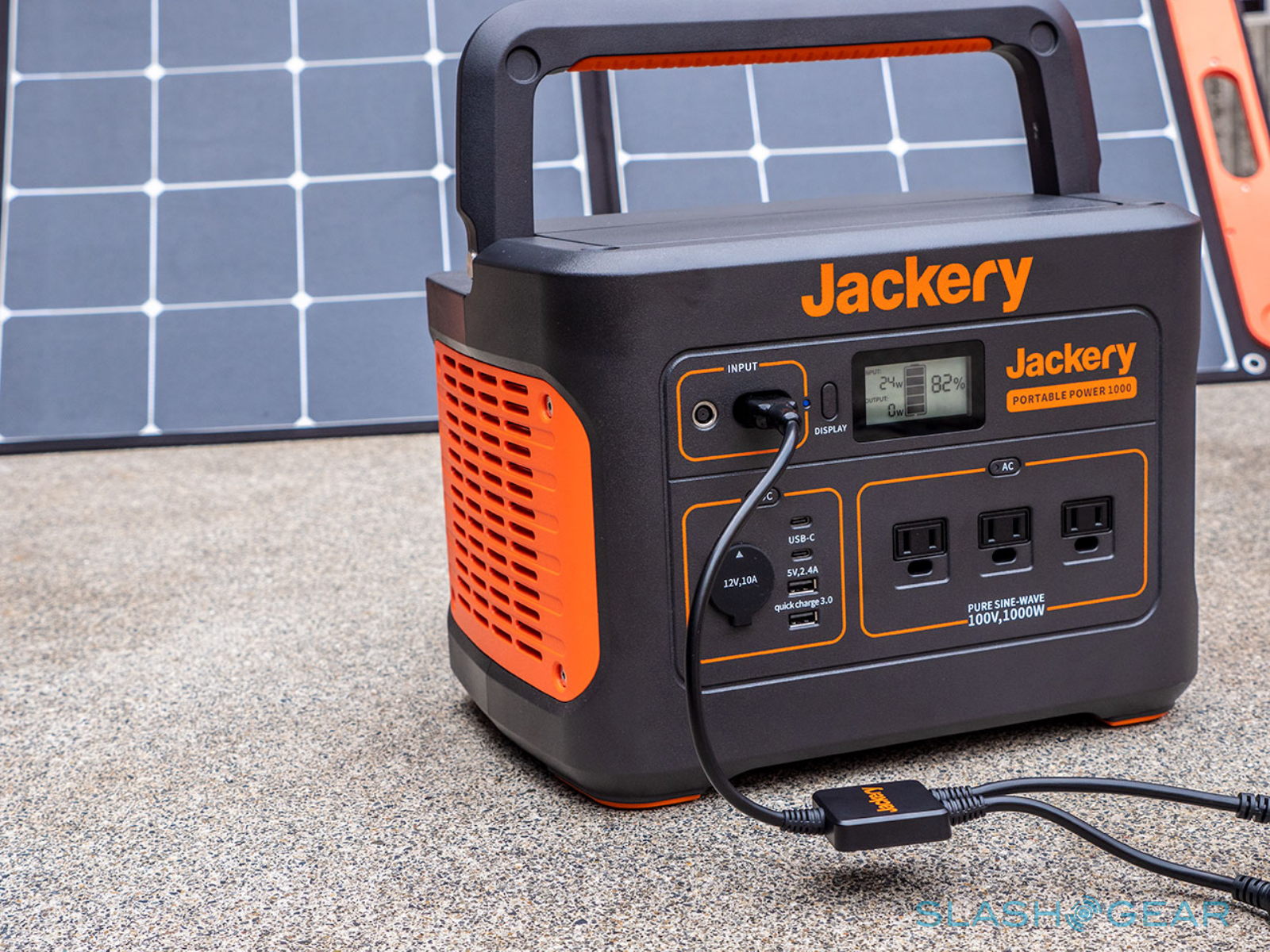 In contrast, the Jackery Explorer 1000 Portable Power Station strikes a very nice balance in what it offers and for how much. It’s far from perfect but those nitpicks aren’t always deal-breakers, especially for what you’re getting in return.

Hopefully, Jackery has already taken note of these things and if it was already able to pull this off on its first try in the 1000W segment, one can only imagine what the next-gen Explorer 1000 could be.