Sonic the Hedgehog fans might have reason to tune into The Game Awards later this week because it looks like a new Sonic game will be revealed during the show. Sega has been dropping hints that a new Sonic the Hedgehog game will be revealed during The Game Awards, which host Geoff Keighley has been building up to be a big event even outside of the award announcements.

If you follow either Sonic the Hedgehog or Geoff Keighley on Twitter, then you probably saw an interesting exchange between the two recently, with the Sonic account asking Geoff if he had any extra tickets to The Game Awards. After some banter about how the official Sonic account doesn’t follow Keighley on Twitter, we get confirmation that Sonic and Sega will be at the show later this week, implying a new game will be revealed during it (via Twitter). 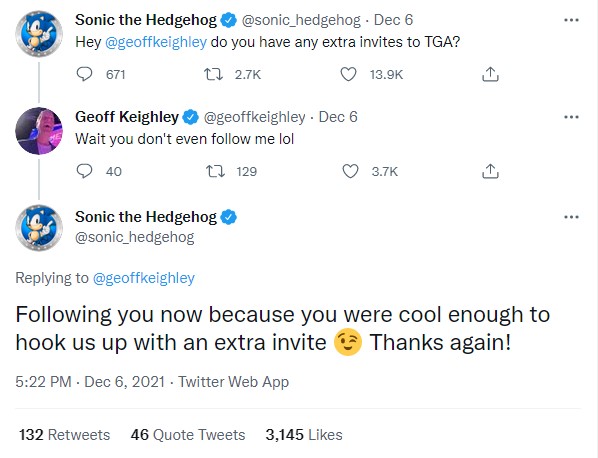 While that would usually be enough for us, that’s not where the hints and leaks end. As spotted by Reddit user JamKingVAC in a post to the GamingLeaksAndRumors subreddit, the Sonic the Hedgehog franchise page on Steam has been updated to show that the series consists of 35 games instead of 34. Of course, there’s no new game to go along with that updated number, so it seems that Sega is preparing the Sonic franchise page ahead of time for a new announcement.

Reddit users also point to a freshly-discovered frontiers.sonicthehedgehog.com domain as evidence that a new game is coming. At the moment, visiting that domain returns a 403 error, but it’s possible that Sega is readying the official Sonic website for whatever this new game is.

What could this new Sonic game be?

Obviously, that domain suggests that this new Sonic game could be called Sonic Frontiers. It’s been a while since the last new 3D Sonic game, which was 2017’s Sonic Forces if we aren’t counting the remaster of Sonic Colors that launched earlier this year. The fact that Sega has trademarked the phrase Sonic Frontiers lends a little more credibility to this particular rumor (via Video Game Chronicles).

It could also be a new 2D Sonic game. While those are a rare sight in the 21st century, 2017’s Sonic Mania was quite possibly the best Sonic game since the original Genesis title. Given the positive reception to Sonic Mania, you’d think that Sega would want to follow up on it with a sequel, but we haven’t heard anything about that in the years since.

For now, the evidence points to a new 3D Sonic game called Sonic Frontiers, but we’re still a long way away from being sure about it. Assuming this new game is revealed at The Game Awards, we thankfully don’t have to wait long before we find out what it is because the show is happening Thursday, December 9th, at 7 PM EST.