Is this the cutest robot arm in the world?

I want this robot arm.* Not in the same way Moss wanted a robot arm in The IT Crowd, but in a way which is mysterious to me, a person who has never owned a robot arm. This is the Mirobot, an open-source desktop robot arm that does not (yet) exist in the world as a product that you (or I) can purchase. But if you’ve ever seen a robot arm that looks nearly so cute, I demand that you show me that baby robot arm immediately.

This thing appeared on KickStarter with an “all or nothing” goal of $30k, and it attained that goal in under an hour. When I’m writing this article, it’s got a bit over 400 backers and a whopping $170k in pledged cash. Could one attain such a pile of cash funding on cuteness alone? I mean, yes, but this robot arm can actually do things besides just pretty.

They say “until now, it has been unrealistic to own a quality industrial robot at home.” They suggest that “today that changes,” and that it changes with “Mirobot, the smallest 6-axis industrial robot arm for home, school and professional use.” Sounds reasonable – but why?

What on earth would I even DO with a robot arm? Maybe get it to hold a little flag, or hold a pencil and draw a picture? Assuming the software that controls this machine is simple enough, I expect I’d be able to do all sorts of weird stuff. 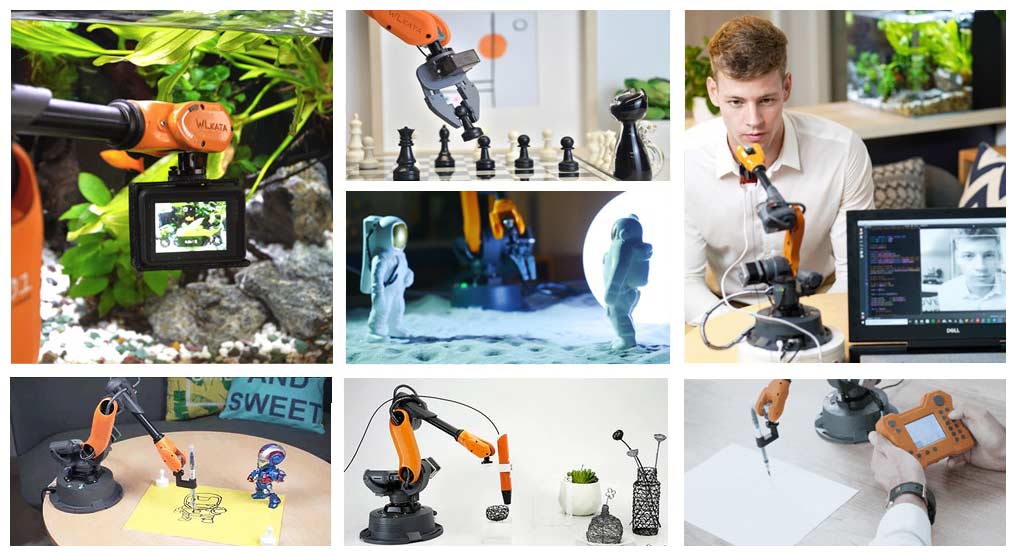 But here’s the thing that makes me hesitate when it comes to a project like this. When it’s a gadget that requires software, but wasn’t made by a major brand whose survival depends on the usability of said software, I tend to shy away from said gadget. But when said project has a large enough community of hardcore tinkerers – like this one MIGHT – things are different.

There are now several hundred people onboard with cash in the game enough to own one of these robotic arms. If the arms are delivered and are delivered to the spec which has been suggested by the Kickstarter, I’d wager to guess that there’s a large enough community in the mix to assist and develop the arm even IF the original maker decided to disappear — not that I think they’ll disappear, but it’s always nice to have double-assurance of a future for a several-hundred-dollar gadget.

This super cute robot arm can be found over on Kickstarter right this minute. It’s got about a month to go before its initial campaign is closed for pledges. I imagine it’ll get quite a few more than it’s already attained in a shockingly short amount of time.