Is Anything Really Necessary?

Necessary. It’s like a dirty word. A curse, or at least it was at my house. Activities were defined on a scale of how “necessary” they were. Snagging a couple Tagalongs before dinner. Is that necessary? Want to drive 20 miles to visit my girlfriend on a school night. Is it necessary to see her before the weekend? Waiting in line at midnight for the new Sonic the Hedgehog game (it was the 90s, after all). Definitely unnecessary. It is with those voices in my head that I read Mike Perlman’s column about whether tablet computers are “. . . Really Necessary.” Necessary? I consider myself an expert on battling the subject.

First, a delightful disclosure. Not just my usual disclosure about how in my day job I work for Samsung and we make tablets like the one Perlman mistakenly thinks are not necessary. No, this is about Mike. Mike and I worked at a past Web site together. In fact, I hired him there, and I was his boss. When I left, he took over for more than a year until he left to join his current site.

[aquote]Why did people need a tablet? Why was this better than a laptop/netbook?[/aquote]

I’m not going to argue with Mike’s assessment of the current tablet herd. I do think that his premise is flawed, asking whether or not a tablet, or the entire tablet category, is necessary or not. But my answer here will not simply recommend that you buy a specific tablet and love it until you find it a very necessary part of your life. Instead, I wonder if we should question the relevance of the term “necessary.”

Before the tablet computer got huge, the most common criticism was about use-case scenario. Why did people need a tablet? Why was this better than a laptop/netbook? Netbooks were popular and cheap. They could browse the Web, handle some productivity and maybe basic gaming, watch movies and videos, and everything else a tablet could imaginably do.

In my mind, it felt cool. It felt great. Did it feel necessary? Why rain on my parade?

Let’s define necessary. Necessary means that you have a task to perform, and you want the best tool for the task. Perhaps the only tool that will help you accomplish your goal. Want to find a stud in your wall before you drill? A stud finder is necessary. Want to cook the perfect omelet without too much butter? A nonstick pan is necessary. Perhaps not the only possible tool for the jobs, but necessary enough.

Necessary means that you have limited resources and you need to spend them wisely. I was going to order the wine pairing with my prix fixe meal, but I was already spending so much, it hardly felt necessary. I was going to have my eyebrows threaded while I was getting my mani/pedi, but I was low already running late for my date, and I looked good enough, so it wasn’t necessary.

I take the greatest issue with this last. Mike says that “tablets . . . are expensive, shiny, adult toys that serve as status symbols in most cases.” Okay. What’s the problem? 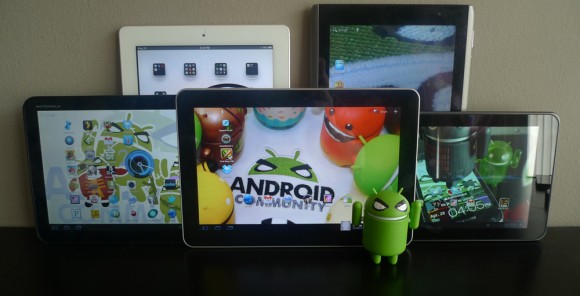 Expensive? Apparently Mr. Perlman is channeling Herr Schindler. Every penny counts. Instead of this $730 tablet, I could have purchased a cheap netbook for $200 (on contract). I could have given the extra $730 to charity. I could have used it to take a class at my local community college, then gotten my degree, then gone on for a PhD in microbiology, and then . . . cure for cancer!

I’m not being snide. I have money problems like everybody else. I’ve been underwater on two consecutive house sales in the last 5 years. The last thing I want is for someone to sell their organs to buy a tablet computer. But you can’t dismiss the entire category as expensive. It’s expensive compared to a spiral notebook, but cheaper than hiring a personal assistant. In between, people will make their own decisions. Plus, tablet prices have been fairly competitive from the start, perhaps more than any previous high-technology category.

Shiny? Some of them. Some are glossy. Some are matte. Some are thick, some are very thin. Is Mike really saying we should do away with all products that are shiny? Is shiny suddenly a negative attribute? I understand that Mike is channeling a familiar stereotype about shiny, pretty things, and relating the tablets to commodities like jewelry. Even so I would take issue with this argument that a thing that is shiny for shiny’s sake is worthless. But I think we can agree that being shiny is not a negative attribute in well-designed electronics.

Adult toys? Apparently, Mike has found a use for his tablets that we hadn’t considered. Kidding aside, what’s the problem with adult toys? Why can’t adults have toys? A toy is a possession created for pure enjoyment. What is wrong with adults having toys?

At some point, we started to equate toys and fun with irresponsibility and childishness. I’m not sure why. As adults, we never gave up our toys. We just started calling them by new names, disguising their true purpose, which is to make us happy. Is it irresponsible for an adult to possess something purely because it makes him or her happy? We tend to disguise these happy attributes as aspects of design, in a car or in fashion or in our houses and furniture and appliances. But someone who personally owns a cappuccino machine that can feed a small African village and outclasses all but the most European of coffee bars in my area . . . well, that person owns a big toy. And they should enjoy it like an adult. Take care of it. Relish it. But don’t be prideful or boastful about it.

He then pastes a conversation he had with a cell carrier representative, where he badgered her again and again about why he should buy a tablet. He wants to know why he needs a tablet in addition to his 13-inch MacBook Pro . . . that he paid $1,400 for. That’s right, a guy who paid more than twice as much for his laptop as any respectable Windows owner would dream of paying, for the most woefully underpowered MacBook in terms of price/performance (no dedicated graphics card on a Pro laptop?), is asking a poor sales rep why he should buy a tablet that can’t run Final Cut. Final Cut. Mike, my friend, you are officially THAT guy.

Mike knows he is wrong. That’s why, at the end, he checks in to say his boss is a tablet guy, himself. But Mike thinks that if you are buying a tablet to sit at Starbucks and check Facebook, you are drinking the Kool-Aid.

First, kudos to Mike for spelling Kool-Aid correctly. Second, that analogy is completely played out. No more Kool-Aid. I’m declaring that meme dead.

[aquote]Arguing about whether a device is necessary, that’s missing the point entirely[/aquote]

Third, Starbucks has better coffee than any other coffee shop around me. I could make better coffee at home, and I often do, but sometimes seeing people and getting out of the house are more important than great coffee. Sad, but true. Fourth, Starbucks has free Wi-Fi, comfortable chairs, and they don’t hassle you to leave after sitting for an hour straight.

Fifth, why do you need a pro laptop at Starbucks? For the keyboard? The big novel you’ve been working on for three years? Got a compelling protagonist? Got an obstacle for him to overcome? Tablets are more comfortable to hold, by far. They take up less space. They have better battery life. Plus . . . this is a silly argument.

Arguing about a category is silly. Arguing about whether a device is necessary, that’s missing the point entirely. Criticizing people for buying a device simply because it is fun and might make them happy, that’s practically Marxist. Shunning buyers because they bought into a product category that is skyrocketing in popularity?

Well, Mike, are you still riding around on steam-powered motorcycles or have you switched to the new-fangled internal combustion engine, yet? Personally, I find these definitions of “necessary” to be stifling. I’d rather grab a couple peanut-butter cookies, go visit Charlene in Reisterstown and get back in time to queue up for the new Kanye and Jay-Z album that goes on sale at midnight. Now, if I could only find a record store.