iPlayer for Kindle puts TV shows on your ereader

As bizarre, brilliant ideas go, “iPlayer for Kindle” has to be one of the best. Despite initially sounding like an April Fool – video content on an E Ink ereader? – it’s actually a real project by Frisnit Electronic Industrial, taking TV shows and converting them into a digital comic strip of sorts, complete with subtitles.

The system takes a DVB digital TV feed along with subtitle information and initially pulls out just the frames where there’s dialog. Interspersed with those are extra frames picked out by scene-detection software that works out a mid-point between anything with speech, so as to capture moments where characters are staring at each other longingly, weeping, or being silently furious.

Everything is then cooked up as an HTML file that can be printed or converted into a PDF, with timestamps and subtitles overlaid, perfect to be dropped onto your Kindle. A 30 minute show works out to roughly a 20MB file, bigger than the average ebook of course, but a lot smaller – and more E Ink friendly – than a video file.

We’ve tried it out on our Kindle, and it actually works pretty well, despite being in greyscale. Two frames per page are shown, and the second-gen Kindle handled the sizable file with no sluggishness. Whether we’d reach for this rather than iPlayer on a cellphone or tablet is debatable, but as crazy proof-of-concept projects go, it’s utterly fantastic. 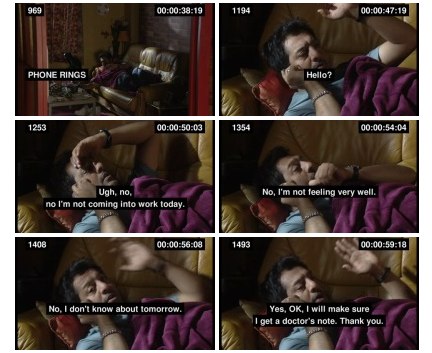