Apple have pulled ahead of Microsoft in terms of smartphone market share, according to a comScore report detailing October’s US mobile traffic.  The research firm has been tracking month-by-month usage across multiple platforms, and while RIM still leads the way with roughly 15m devices in use, the iPhone has pulled ahead of Windows Mobile’s roughly 7m devices by around 2m.

The gap was narrowed back in July, and Microsoft’s sluggish growth between then and October has left them floundering behind Apple’s significant climb in numbers.  Google’s Android platform and Symbian are both trailing at the back, while Palm has around a third of Apple’s numbers.

In terms of specific patterns of use, comCast found that both Android and Apple users were roughly equal in their mobile media and news/browser access, while iPhone owners made significantly more use of email.  Android users are slightly more likely to use IM on their devices, perhaps because of the platform’s native multitasking support, while iPhone users are slightly more likely to access social networking.  comCast reckon the battle is now between Android and iPhone: 17-percent of users questioned during the three month period to October said they were planning to buy an Android-based device, while 20-percent said they planned to pick up an iPhone. 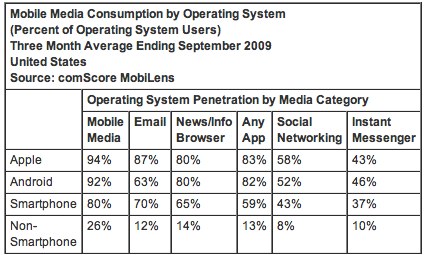