There are certain statistics every good camera or camera-toting device group pays attention to, one of the more unassumingly important set of these being on Flickr’s own most popular cameras page. This page is an extremely simplistic look at which devices are attached to photos the most often in the Flickr community, graphs broken down into Point & Shoot, Cameraphones, and the cross-breed Most Popular Cameras overall over the past year of Flickr action. What we’re seeing today is that longstanding king of Flicker photos, the Nikon D90, has been ousted and replaced by the rapidly growing iPhone.

This is the first time (in recent history at least) that a smartphone has taken the top spot from the Cannons and Nikons of the world, a wakeup call for the point and shoot / DSLR / every camera-only device in the world to be sure. When you take a look at the Popular Point & Shoot Cameras chart you’ll notice that not only are they ALL Canons, they’re all evening out, this chart (and the others) showing the % of members on the site. This means that the cameras being used by members of the photo-centric site are fragmenting, while what these other charts are showing us is that Apple and their tight relegation of models of devices, (aka one smartphone to rule them all: iPhone,) is more than a powerful message to the rest of the non-smartphone handheld device world.

Finally, if you take a look at the Popular Cameraphones category, you’ll see that the iPhone 3G has been dominating for as long as this graph represents, while the iPhone 3GS follows a very similar path to the Android device HTC Evo 4G and the iPod touch creeps up the bottom. Then there’s the iPhone 4 which near the beginning of the graph directly counter-acts the path of the iPhone 3G and takes over by a long-shot by the time the present rolls around. 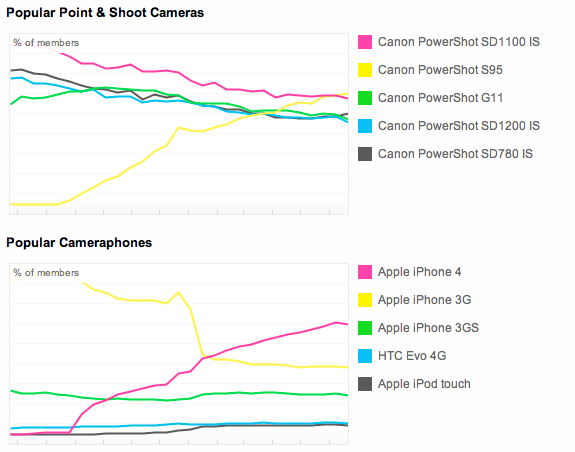 It’s important to note the “about these graphs” section on this page which includes word that the graphs can only be read as accurate to the point at which you note that Flickr can automatically detect the camera used to take the photos or videos uploaded to the site, this being only about 2/3rds of the time, or so they say. This situation gives an unfair advantage to all non-cameraphone devices as it’s “not usually possible” to detect the make of cameraphones with the method Flickr uses, so you might want to think about such a thing like this: you need a combination of being able to be read by Flickr as a device model name and actually being popular to overtake these graphs, and Apple‘s got that combo in the bag!