Apple has taken the top spot for customer satisfaction in the latest J.D. Power survey, the company’s eighth successive win, and extending its lead over Android device manufacturers like HTC and Samsung. The iPhone maker scored 849 overall, up ten points over the last survey, and putting 59 points between it and second place holder HTC. The survey, which questions owners on their happiness with different aspects of the device ownership experience, found iPhone users were particularly pleased with the handset’s physical design.

While HTC‘s recent sales have been underwhelming, actually satisfaction around the company’s phones puts the company in second place, with 790 points. Samsung comes in at third place, with 782 points, while Motorola and Nokia take fourth and fifth, with 777 and 763 respectively. 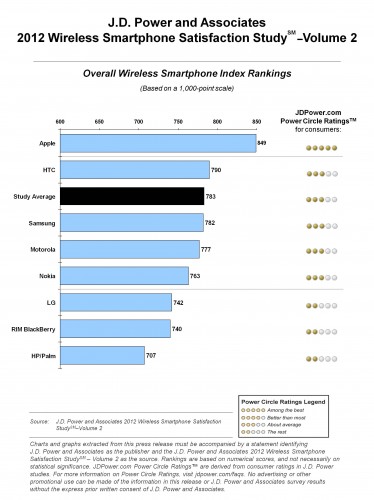 The study is all the more interesting, given Apple is believed to be preparing to reveal the new “iPhone 5” in just a week’s time. That event – which SlashGear will be liveblogging on September 12 from 10AM PT – is expected to see a new design of phone launched, with a larger touchscreen and the inclusion of 4G LTE connectivity.