AT&T sold 5.5m smartphones at the start of the year and saw data revenues surge almost a fifth year-on-year, the carrier revealed in its Q1 2012 financial results today, with revenues and income both up. The company saw $31.8 billion in consolidated revenues, up $575 million from last year, and with wireless revenues up 5.4-percent year-on-year to $16.1bn; wireless data revenues contributed $6.1bn of that, climbing a full billion from Q1 2011. Meanwhile 4.3m iPhones were activated in the quarter.

That suggests that the iPhone continues to dominate AT&T’s smartphones overall, though since AT&T only quotes iPhone “activations” (i.e. including hand-me-down devices) and smartphone “sales” it’s hard to know for certain. The carrier activated 5.5m smartphones in total, a growth year-on-year but leaving Android still trailing significantly behind Apple’s device. Overall, smartphones accounted for over 78-percent of AT&T’s postpaid device sales, and almost 60-percent of the carrier’s total postpaid subscribers use such a device.

Good news for AT&T’s bottom line, then, as smartphone subscribers have an ARPU (average revenue per user) 90-percent higher than their featurephone brethren. Postpaid APRU grew 1.7-percent for the quarter, and data use is strong, with more than 70-percent of smartphone customers opting for AT&T’s bigger bundle packages. 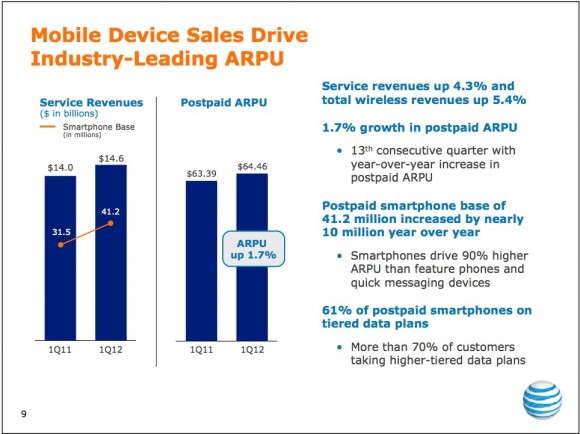 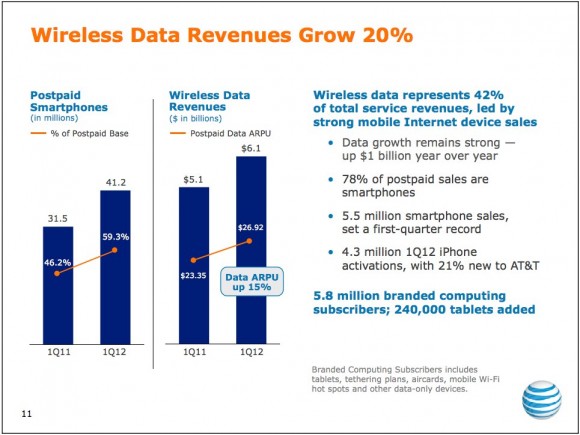