Apple’s voice assistant Siri does a lot of things iPhone users ask her to do; maybe not always perfectly, but at least their somewhat related to the request. However, it has recently been discovered that asking the device to charge the battery triggers the software to start calling emergency services. It’s not clear if this is a bug — though most likely it is — or exactly why this happens. Perhaps part of an unannounced security feature? Either way, it’s something to aware of, and avoid if possible.

Now, we highly recommend you don’t do this, as making unneeded calls to emergency services is not only a terrible thing to do, but it’s also illegal in some cases. The call is triggered when asking Siri to “charge my phone 100 percent.” There is a five-second window in which users can cancel the call, but if nothing is pressed, the call will go through. 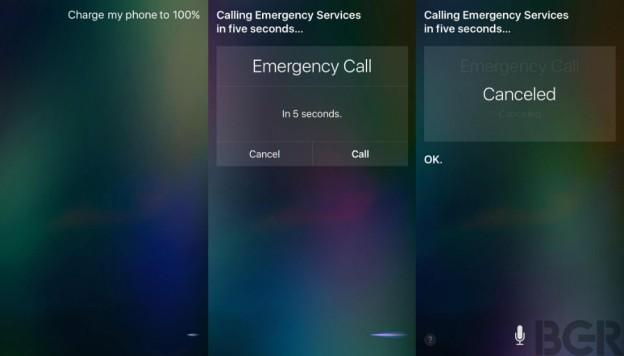 This has been found to work on iPhones running iOS 8, but not those running the iOS 9 public beta, more evidence that this is a bug. The possibility that this is part of a security or safety feature stems from the idea that it could be used when people are in danger from an attacker, and could say the phrase to call the police without drawing attention. Then again, it’s not really much of an improvement over just dialing 911.

There’s no official documentation on this issue from Apple, and the company has yet to publicly comment on it, so once again, it’s likely a bug. But still an interesting one.