Today Apple revealed the iPhone 8 and the iPhone 8 Plus (AKA iPhone 8+) during a major event at the Steve Jobs Theater in Apple Park. This device is the latest in a line of smartphones from the company that’s been calling said phones “iPhone” since their first in 2007. While precedent suggested that Apple would reveal an iPhone 7s and iPhone 7s Plus this week, they’ve gone right on ahead to the number 8 to emphasize the importance of this next-gen set of smartphones.

The iPhone 8 will cost $699 – it’ll start there, anyway. That’s for the 64GB edition, while a 256GB edition will also be made available. The iPhone 8 Plus will cost $799 and up, and will also have a 256GB internal storage version. 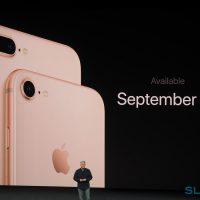