iPhone 6s Plus gets both a drop and bend test

What do you usually do when you get a brand new, premium, expensive smartphone? Most will coddle their mobile devices and wrap it around so much protective coating that would make an armored tank blush. Others subject theirs to excruciating torture on the very day the first smartphones land in the market. Given the not so stellar reputation its predecessor had, it’s almost expected that the iPhone 6s Plus would immediately be subjected to such tests. Fortunately for the big guy, it survives to fight another day.

The iPhone 6, particularly the iPhone 6 Plus, was the subject of many criticisms and jokes when it was discovered to bend almost too easily to pressure applied by nothing more than regular hands. Or sometimes butts. Since then, Apple was said to have improved the build of its iPhone 6s and 6s Plus, this time utilizing 7000 Series aluminum. Naturally, some people wanted to see just how much that would perform. Challenge accepted!

First, a traditional drop test. TechSmart, going all the way to Australia where the iPhone 6s arrived ahead of everyone else, subjects the iPhone siblings to some drop tests, first from pocket height, then from head height, and finally from above the head. In the first two tests, the iPhones survived with just a few but negligible nicks on the point of impact. However, on the last test, the iPhone 6s had the unfortunate fate of landing on its face, causing the glass the shatter, though the display and touch screen were completely fine. And just to be fair, the iPhone 6s Plus was dropped from a height of 10 feet on its screen too. Lo and behold, not even a scratch there.

And now for what everyone is probably waiting for, an iPhone 6s Plus bend test. This time FoneFox, also from Australia, does the expected, applying pressure on the middle of the iPhone using just his bare hands, or that of two other people. The smartphone does show a bit of flex while pressure was being applied but returns to its straight form when let go.

It seems that Apple’s changes did pay off and the 7000 Series aluminum keeps the iPhone 6s and 6s Plus safe from scratches and bends. The screen, of course, at least for the poor iPhone 6s, is a different story. 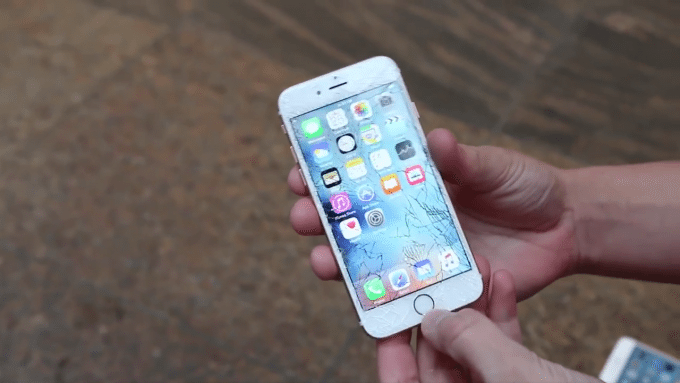