iPhone 6, 6 Plus use stats for first weekend revealed

We may love to talk iPhone 6 sales, but they don’t tell the whole story. Even more interesting to some are usage statistics, which can be pointed to as a more boots-on-the-ground way to analyze how well a phone is doing. Via Chitika, we’ve now got iPhone 6 and iPhone 6 Plus usage stats from the first weekend the device was actually available.

To get these numbers, Chitika analyzed “millions” of impressions on their ad network over the weekend (September 19-21). They were compared to overall traffic, giving the percentage stats, and retrospectively graphed versus iPhone 5 usage stats the first weekend that handset was available. 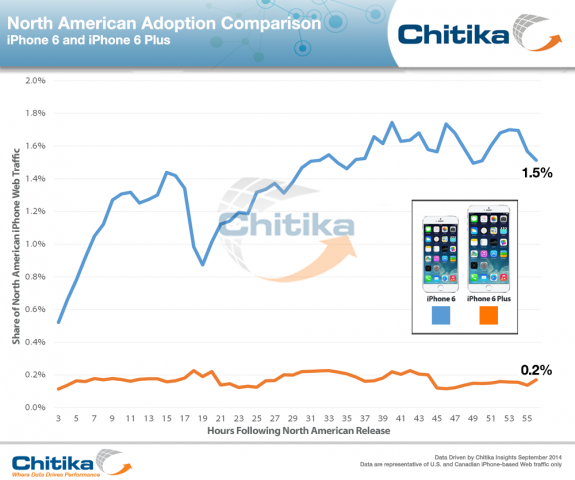 So how did the duo of new Apple devices do? The iPhone 6 represented about 1.5% of overall iPhone web traffic. The iPhone 6 Plus accounted for 0.2% of iPhone traffic, hamstrung by its limited availability.

When compared to the iPhone 5, the numbers are oddly skewed in what you may consider the wrong direction. The weekend following release of the iPhone 5, iPhone traffic for that phone topped out at 2.7%.

That’s a full percentage point ahead of the iPhone 6 during the same release timeframe. Odd when you consider the fever-pitch surrounding the iPhone 6 this year, but it perhaps serves as a reminder that the iPhone 5 was a much bigger deal, comparitively. 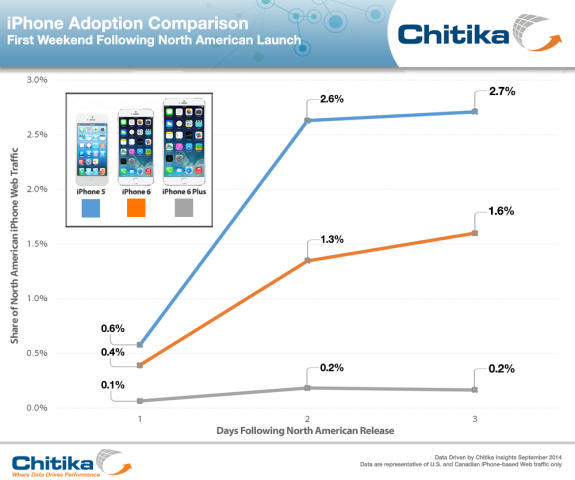 Still, Chitika points out the adoption rate (and subsequent use) is much more profound than you might find elsewhere. According to Chitika, Samsung wasn’t nearly as succesful with their flagship device. “For some perspective, it took North American Samsung Galaxy S5 users over a week to generate a 1.5% share of Samsung smartphone Web traffic.”