Another set of photos appears to have been leaked of the iPhone 5, the next generation Apple smartphone set to be revealed – or so we’ve heard – some time next month. What these photos reveal is some high definition angles on the front panel of the phone showing how it will compare to the iPhone that’s currently on the market as Apple’s hero device. This next-generation iPhone continues to appear to have a 4-inch display with essentially the same wideness of body that the previous generation has right this minute.

The new iPhone also appears to have an ever-so-slightly taller body (considering the panel) and essentially the same thickness as the iPhone 4S. The photos you’re seeing here come from SinoCet where they’ve got no qualm with letting their lot be seen. They note that the iPhone 5 front panel includes “lcd, touch screen digitizer, front panel frame, and home button.” This same group has released a video of them messing around with the panel with some lovely piano music to show you how serious they are about making a good presentation.

It would appear that there are a few different possibilities here in this wave of leaked parts for the supposed new iPhone. One possibility is that there’s someone – or a set of people – conspiring to sell pieces of the new smartphone straight from the factory in China. Another possibility is that this set of leaks was carefully constructed by Apple themselves to lead everyone in the tech new industry off the scent of the real deal iPhone 5. One more possibility is that these parts were sent out to 3rd party case makers who, rather foolishly, decided to take photos and video of them many, many times over. 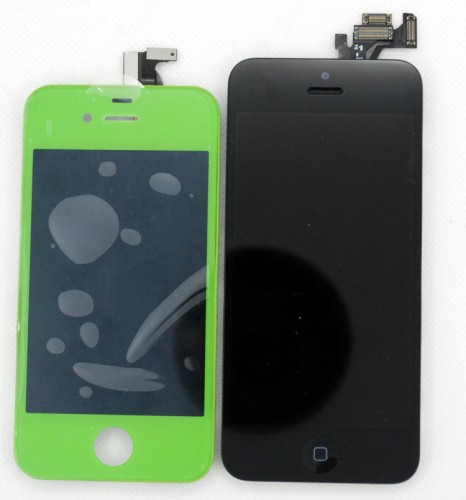 Have a peek at the timeline below to see more important moments in this supposed river of pre-release photos and videos of the new iPhone. Note also that we’ll be waiting with our fingernails in our kneecaps for an announcement of the new device next month, and will be reporting to you anything that happens via Apple as it goes down – don’t miss it!