iPhone 4 Catches on Fire Thanks to Defective USB Port

Yes, it’s another problem with the iPhone 4. This time around, though, the results are far more real than any before it. So real, in fact, that a customer actually got burned a little bit from it. Thanks to Boy Genius Report and one of their contacts, we’ve got some images of an iPhone 4 burned at the USB port, with the Apple USB cable actually melted because of the extreme heat that erupted from the connection.

According to the contact, the had a customer come into his store, and show off the iPhone 4 that had just burned from the inside out, catching the USB cable on fire, and subsequently melting the plastic casing. The customer reported that he was simply plugging in the cable, when the unit caught on fire. He is relatively unharmed, though he did report that it burned his hand slightly. The customer tried to come in and replace the phone, but the store itself was out of stock (not surprising). 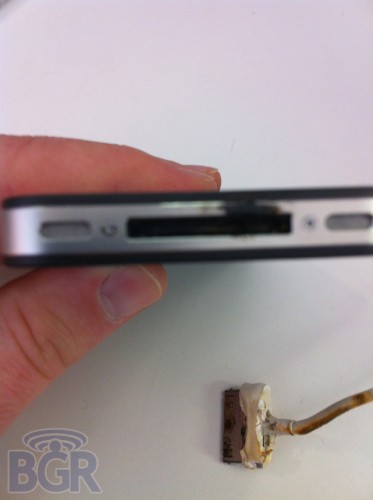 When the contact got in touch with an Apple store, the clerk did confirm that it looks like it’s a faulty USB port, and not something that the customer did in particular. As the pictures clearly show, the USB cable is melted beyond repair, and so is the USB port on the device itself. Apparently the inside of the USB port melted to some extent as well. This is the first time we’ve heard of anything like this happening, so all we can hope is that this is one in a few million, and it doesn’t happen again.