The iPad Pro; we still don’t know what to make of it. Apple says it’s not even a thing yet, while various leaks suggest it’s in the works and on its way. Via Weibo, we are now seeing what is believed to be a mold for the iPad Pro. In some cold manufacturing outfit somewhere in the world, a metal mold sits on forklift tines. Is it the iPad Pro rear cover? There is certainly evidence it could be, but enough suggesting it’s not.

To scale — and assuming those are your average size forklift tines — the mold and cutout are sizable. The mold would appear to be larger than you’d find for an iPad Air 2.

There’s also some sort of design in the middle, which could be an Apple logo. There’s also a tiny dot int he top corner that appears to be a a camera cutout. 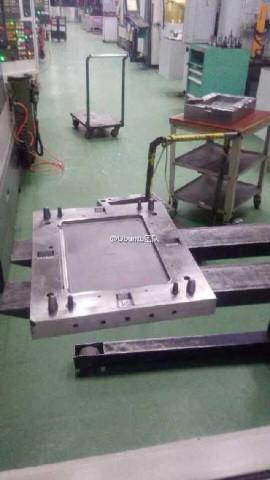 Apple has all but debunked these kinds of rumors, but that was also months ago. At the time, it was believed the iPad Pro was put on hold while suppliers were asked to focus on the iPhone 6 and 6 Plus. With stock levels for Apple’s flagship phone reaching reliable levels, it’s possible Apple has started looking toward the iPad Pro.

Still, it’s a fuzzy picture in an unknown environment just flopped onto social media. There are no accompanying pics, and we don’t get a good look at details of this mold. There is no supporting documentation for who may have ordered it, and photoshopping is not tough if you really want to fool the world.

There’s also the possibility of a new Mac to contend with. And the incoming Apple Watch. If this were an iPad Pro, we’d likely not see it until the Fall, so prototype or fake, it’s early days for leaked info.